There's a great song from the nineties that I'm sure most of you will recognize instantly. It's called "What's Up" by Four Non-Blondes. Singer Linda Perry has an amazingly powerful voice and her delivery of the line "and I scream from the top of my lungs what's going on?" perfectly captures what countless people are feeling now with all this lockdown madness. No wonder the official video (embedded below) has had well over one billion views so far!

I fondly remembered this great anthem from when it was first released, so I found the official video and tweeted it. About a week later I heard it being played in a Bondi Junction cafe. I thought this was quite significant because I hadn't heard it on the radio or anywhere else for many years. It's clearly on a lot of people's minds lately.

As mentioned, the chorus is actually "what's going on?" but the song was given the title "What's Up" because that phrase was already synonymous with the Marvin Gaye classic.

Therein lies a fascinating rabbit hole. See, it seems the iconic soul singer was not who he appeared to be. We all know that he met a sad and violent end -- killed by his own father. This was painted as a massive tragedy at the time; such a cruel fate for a peaceful, loving man. But in reality, he could well have been a serial killer!

This theory comes from Enty Lawyer, whose scandalous blog actually has a very good record for accuracy.

If true, it seems that the power of fame and celebrity made this singer immune from prosecution. And we've certainly seen many examples of that recently when it comes to Hollywood. Figures like Kevin Spacey come to mind here. It's not what you know but who you know that matters, as the saying goes.

Still on the subject of rabbit holes, the phrase "what's up" brings to mind another genre of entertainment, cartoons.

And who's the biggest name in that field? Walt Disney.

He, like Marvin Gaye, seems to have been a very different character to the one he presented to the public. Like many extremely highly influential figures he was a 33rd degree Freemason.

While the lower levels of this religion seem full of fine people who only want to do good for their community, the same cannot be said for those right at the top. They seem to all be creepy globalist control freaks who work tirelessly behind the scenes to realize their sinister agenda.

That's why the song "What's Up" is so relevant. There's a line from it that I always remember: "I realized quickly when I knew I should that the world was made up of this brotherhood of man, for whatever that means."

This could be seen as a subtle reference to "the patriarchy". And I recall that when the song first came out many of the feminist chicks I knew loved it for that reason.

At the time I thought they were being silly about all that stuff. But now, as I've learned about these secret societies, I realize that they were really onto something. 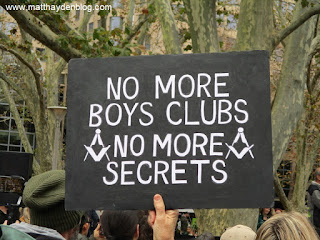 The tragic irony is that members of these particular boys clubs seem to be among the most powerful financial forces fueling victim feminism itself! They do this because cultural Marxist movements further the societal division that they can leverage for greater control of the masses. It's a classic divide and conquer tactic.

But more and more people are becoming aware of their pervasive, though hidden, influence in so many fields as evidenced by the increasing numbers of placards like these at recent anti-lockdown demos in Sydney. 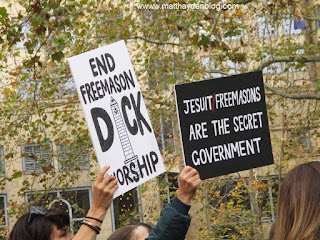 Of course it's not just high ranking Freemasons who are behind the current global insanity. But they clearly have a helluva lot to do with it.

I suspect that most if not all high profile "public health" officials are secret society wankers, or at least controlled by them. They certainly know how to stay focused on their agenda and mass vaccination is clearly the biggest part of that right now. That's why these "doctors" are all fully supporting the "jab is your passport to freedom" bollocks pedalled by globalist-controlled pollies.

The way these highly qualified professionals have utterly ignored the obvious harm caused by the "vaccines" while ramping up the fear of the dreaded 'rona to absolutely batshit levels is beyond alarming. But at least this is waking up a lot of people.

So, "what's going on?" as the fiery singer below cries so powerfully? Well, a highly organized bunch of evil arseholes are going all out for total global control under the cover of a "pandemic" that they themselves engineered. They are doing it so desperately and clumsily, however, that it is becoming completely obvious to anyone capable of rational thought. I believe that eventually a majority of the population will be awake to this, which is why we will win in the end.

Posted by MattHaydenAU at 3:24 PM