It's on for Young and told!

If you think that MSM narratives develop organically as a result of brave journalists seeking the truth without fear or favour then you're a complete moron. They're obviously defined by a select group of globalist arseholes, then dropped from on high into the empty bonces of the robodolts we see on the teev. They then just regurgitate them like the mind-controlled muppets they all are.

The pack attack on Dr Jeannette Young, the Queensland CHO, is a perfect illo of this phenomenon. She had the temerity to say something sensible about the risk of certain COVID "vaccines" so the globalist mind control machine has activated its flying monkeys who are all flinging poo at her simultaneously.

Take dopey Kochie, who said she is "dangerous". And slimy spineless pollie Birmo called her an "extremist".

Another Sunrise on 7 "journalist" asked if the QLD CHO was an "anti-vaxxer". That just showed what a thick, primitive level these MSM robodolts are on. Globalists have set a very low (Nat) Barr.

Well keep it up, blue check arseclowns! At this rate, before too long Pete Evans will have Brendan "'Rona Socks" Murphy's gig! 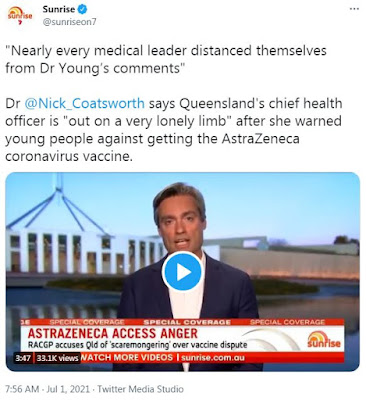 Needless (or should that be needles?) to say, the stupid TV show wheeled out a slick and plausible public health "authority" to throw some more shade on Dr Young. Notice the nasty personal sledging he used. Very unbecoming of a "medical expert", don't you think? 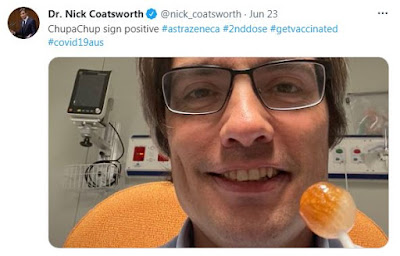 Like so many brainwashed slebs, Dr Ken Doll McScreamy posted a selfie after getting the jab and proudly flashing his lolly pop reward. The message here was clearly "roll up, suckers" and it's been used repeatedly by numerous controlled arsehats. It's creepy as all get out. 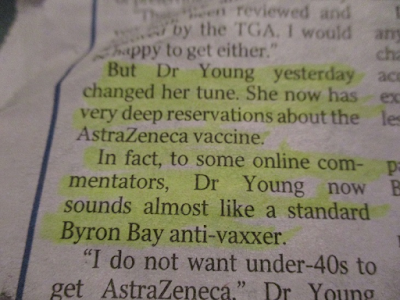 This was the editorial from the Daily Telegraph. Notice how it repeats the same "anti-vaxxer" smear that Nat Barr blurted. 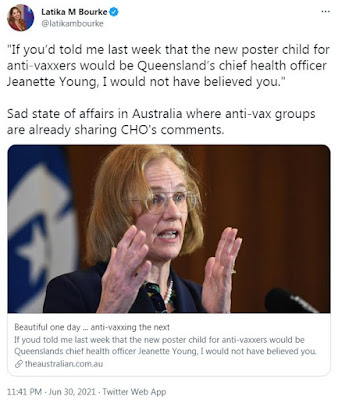 And there it is again! 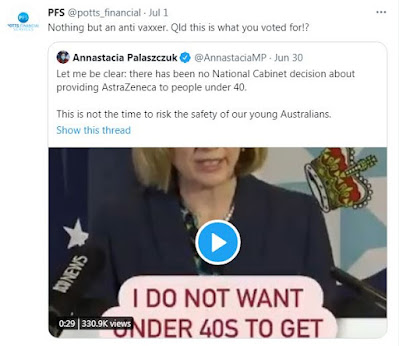 With MSM blue checks all squawking the same line, credulous non-media tweeps start repeating it as well.
See how this works? A narrative that has been carefully contrived for the purposes of mass mind control by globalist elite scumbags is made to seem like a spontaneous reflection of public opinion.
It really is evil.
More thoughts on this subject and other fake narratives in the MSM below.
Thanks for reading, and if you've enjoyed this piece, please consider supporting me via Ko-fi. Aussies, know your rights!
Posted by MattHaydenAU at 1:07 PM