The globalist control matrix is being exposed. Imagine that!

Crikey! The world is just getting crazier by the minute, innit? There's clearly something absolutely yuge going on behind the scenes. Hard to tell what it is, but I'll give it a burl:

It seems that we've been living in a false reality for a long time now, and have mostly been none the wiser. It's the kind of global mind control system so brilliantly portrayed in the novel 1984 by George Orwell, and the movie The Matrix.

It looks very much like coronavirus is a bio-weapon that the globalist Cabal created to kill many people, and scare the rest of the world shitless. With the global economy completely screwed by this viral panic, Trump and other nationalists would eventually lose power. Then the creepy elite control freaks could ride in and save us all (from their own lethal creation) with mandatory vaccination, cashless economies and other forms of technocratic tyranny.

The fake news MSM are playing their part in this psyop by zealously promoting slebs claiming to have the bug. But it seems that the white hats have hijacked the psyop, and are using it as cover to "take out the trash" (occult elite super-criminals). It's a case of "all your #plandemic are belong to us".

The biggest Aussie development in recent days has been the closure of Sydney's Bondi Beach. The official reason for this is that beachgoers weren't practising "social distancing". On the surface this sounds kinda plausible. Check out this scene I observed there on Christmas Day 2018. 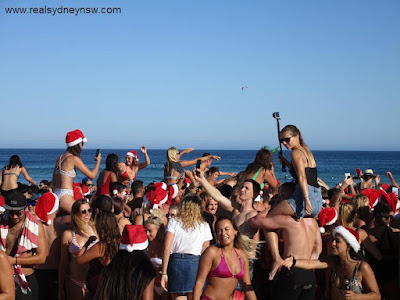 And look closely at the label on the bottle of beer the chick on the left of the shot below is holding. 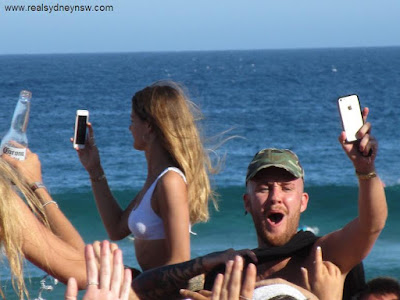 Portents of doom or what! Maybe the universe was tryna tell me something ...

Speaking of hidden messages. An eagle-eyed Aussie made the connection between the closure of Bondi Beach and that recent creepy tweet by Tom Hanks who is one of the first Hollywood stars to claim to have caught the killer disease. 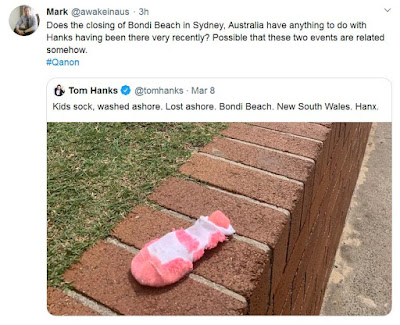 I hadn't made that link myself. But I certainly thought his tweet was so weird that I actually went down there and made a video about it and the local MSM beat-up about coronavirus. I even said in the video that I thought it was "occult elite signalling of some sort".

Maybe we'll never know exactly what was going on here but it's logical to make the connection. Apart from anything else, other extremely popular Sydney beaches such as Coogee and Maroubra have not been closed AFAIK. Is that because the crowds there are just better at social distancing? Somehow I highly doubt that.

This is just another development which points to the existence of some sort of hidden war. There is a big storm approaching -- or maybe it's already here -- and it is raging in ways that we can't yet detect. 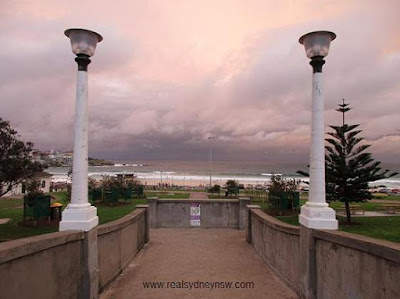 Whatever is ultimately driving all the recent craziness, it's clearly not the novel coronavirus! That's just the "cover story". If you accept that in the shadows a global corruption purge is about to begin (or has already started) then the top down "public health" directives by governments across the world as well as all the unhinged squawking of so many so-called journalists make a lot more sense.

And remember that POTUS recently tweeted: "The world is at war with a hidden enemy. WE WILL WIN!"

Notice how he didn't say "America is at war". He said the world is. IMO he was implying that many countries are on board with The Storm.

Remember how he had Aussie PM Scott Morrison to dinner at the Whitehouse, and made a point of saying he was "made of titanium"? I reckon Trump had just shown ScoMo the plan for this epic take-down of globalist evil, and the latter had pledged his full support. That's why ScoMo announced this controversial policy shift not long after that meeting.

Not surprisingly, the MSM here were terribly butthurt about this wish to pull back from the UN and similar bodies. They have been brainwashed into believing that global government is the answer to all of the world's problems.

Dopey Yank rocker and big time Podesta pal Tom DeLonge recently echoed this sentiment on Twitter, then pulled it after being ratioed to buggery. 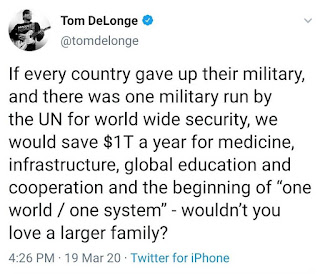 Gawd. So sinister ... If there was only one military in the world, then who would they be fighting against? All of us lowly normies, of course. No wonder they wanna take away all the guns.

But that kind of fluffy fascism is sooo typical of Hollywood, as we all know. And isn't it weird how so many of its denizens are "catching" the virus?

There are various theories about why this is. But it's pretty obvious that most of them are the mind-controlled puppets of the globalist elite. Which is why they put out that vomitous version of "Imagine" by John Lennon.

Nice tune, but the lyrics are classic Cabal-porn. It's the kinda utopian bollocks that NWO fantasists spank the monkey to. It's central banking wanking material, let's face it.

I mean, FFS. "Imagine there's no countries" means Lennon wants just one country (global government). "Imagine no possessions" means the elite possess everything, including the people (who must rent everything from the elite).

It's the kind of song that globalist socialist squillionaires sing to themselves as they quietly dry hump the Georgia Guidestones in the dead of night under a full blood moon.

"Imagine" is only calming if you wanna surrender all control to an all powerful technocratic elite who say they care heaps about you but basically see you as cattle to be farmed, milked, then euthanized when you reach a certain age a la Soylent Green.

It's the anthem for those who would prefer the blue pill to the red one if they were characters in The Matrix. No wonder so many slebs were singing it. They want all the normies to go back to sleep!

If you've seen the movie, you'll remember how that false reality is so vividly illustrated by the Marilyn Monroe lookalike distracting Neo, then transforming into Agent Smith. 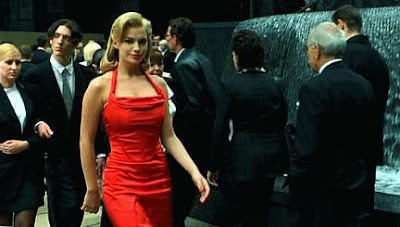 We've all been under a similar grand deception for a long time, one that Hollywood and the MSM have played a yuge part in maintaining. But as I described above, it seems that the globalist control matrix is being taken out, and there's a worldwide Great Awakening happening. Those going through that process -- and there are hundreds of millions of us -- are far more likely to prefer less atheistic, more spiritual musical fare.

Each to their own, of course. But for me that's "Pachelbel's Canon".

It is a sublime, optimistic, spiritual piece. It says everything will be alright; life has meaning; good will triumph over evil. And we never stop ascending.

If you don't start to sook up a little bit from the sheer exquisite beauty of it, you must have no soul!

BTW, The Matrix was made by the Wachowskis. At the time they were brothers but they now identity as women. So many people -- particularly on the Left -- would say that the false reality they were describing in the movie pertained to gender.

Maybe ... But like all great art, the classic movie can be interpreted in various ways. That's why the symbolism of the red pill (which awakens the sleeper) was adopted by patriots the world over.

The Matrix was actually made in Sydney, and several of the city's evocative locations were used in it. That very scene with the woman in the red dress was shot in Martin Place. 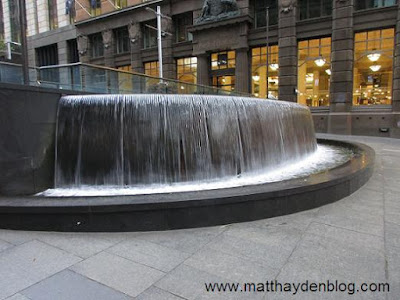 I went down there recently to photograph the fountain that the woman walked past in the film. There was a busker sitting right in front of it. And lo and behold he was playing "Pachelbel's Canon"!

Couldn't help but see this as synchronistic, and thought I'd better capture the moment for posterity. So I hurriedly grabbed my camera and made the video below. It's a bit rushed but I think you can understand my urgency in trying to convey what it all meant.

I suspect many other people are having similarly "spooky" experiences as they detach from the globalist mind-control matrix, see the world anew and perceive deep significance in the events unfolding around them.

There's an absolutely yuge paradigm shift going on right now. That I know for sure ...

We are awake! And everything's gonna be okay. So let's sit back and enjoy the show.

Posted by MattHaydenAU at 11:41 AM