The Delta-dawning of the Age of Bill Gates Virus!

It's obvious that so much of the current global lockdown insanity is about ushering -- or rather, frogmarching -- us all into the Great Reset. "The crown is dead, long live the corona" is the globalist fascists' secret catchcry.

More than anything, this sinister movement is driven by culture. Ultimately it's not political. And given that it's mind-war that's being waged, the mainstream media is perhaps their biggest weapon.

Yes, the MSM leans left. But the "conservative" outlets are owned by the same forces. As Breitbart said, politics is downstream from culture.

This is ultimately the work of "the creepy cult that rules the world". Being the demented, narcissistic freaks that they are, they love to drop their symbols into everything that they own or control.

You see these right throughout the MSM, but the best place to spot them here in Sydney is in the pages of the Daily Telegraph. Every edition is chockas with occult elite symbolism. 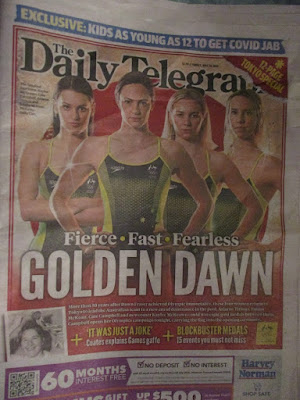 The covers usually include hidden messages to "those in the know". And this recent one looks almost certain to be an allusion to the secret society "Hermetic Order of the Golden Dawn". 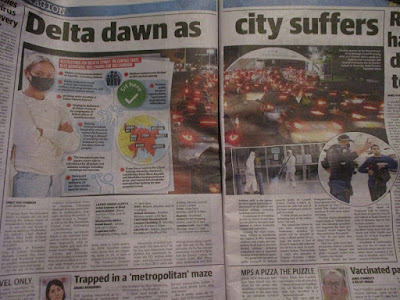 This story was from a few weeks ago. The idea of a new age is invoked again. And what happens at dawn? The sun comes up, bringing light.

The photo included was shot at night, however. Yet there are lights -- the ones in the cars at the Bondi Beach testing clinic. The implication seems to be that the drivers and passengers are illuminated somehow. And who is the bringer of that light?

Well, here's a clue: Bill Gates has been developing a vaccine delivery system that features a bioluminescent enzyme called Luciferase. For globalist control freaks, this is really something to sing about! 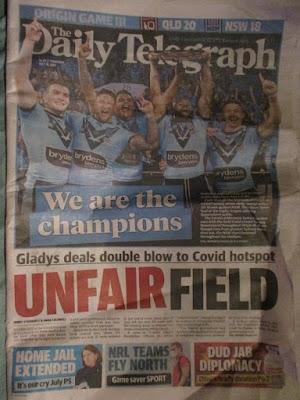 This is another recent issue that I think might allude to the NWO hellscape that secret society wankers dream about achieving. While the top and bottom stories have no link content-wise, the combination of key elements in each of them conveys a thematic message. (They often do this. Here's another example.)

Above, I think the "we" refers to the globalist occult elite. Notice the v-symbolism of the players' uniforms. They love that, which is why the paper often has cover shots of NRL players in their team colours, all of which seem to feature this design element.

They also love the fascist crackdown on Fairfield. It's a microcosm of what they want to install globally.

Posted by MattHaydenAU at 6:57 PM