Why are the jabbed so angry at the unjabbed?

A lot of people are asking this question lately. The intensity of vitriol coming from those who went out and got "vaccinated" and expect everyone else to do the same is pretty amazing.

Obviously there are a lot of thick people out there who are incapable of critical thinking. They have been easily swayed by the relentless campaign of pro-jab propaganda. Like Pavlov's dogs, they bark and howl at the unjabbed.

But there are plenty of other intelligent, thoughtful folk who got the shot (often early on) who also seethe with contempt for those who haven't undergone the same medical procedure. You've gotta wonder, what's going on there?

I think that in many cases it's because they are realizing that they made a really bad decision. They don't wanna admit that they may well have a ticking time bomb inside their bodies. This bugs them constantly and they desperately want someone to blame other than themselves. So they project outward at those who didn't make that same stupid choice.

Broadcaster Chris Smith is a perfect example. He's generally pretty conservative. And he's definitely not an idiot. But he's really been losing it with those who refuse to "get with the program". 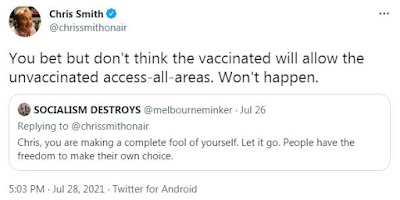 Interesting that he says "you bet" regarding choice. Then he implies that this is a pragmatic decision due to how the vaxxed majority will behave. So, choice has nothing to do with it and it's not the hill to die on.

But right now the unjabbed are still a majority in this country. And as more and more people learn of the risk of clots and other negative reactions (including death) the odds that over 70% will submit to the jab wane considerably.

He may end up getting his wish -- in reverse -- due to shedding concerns. Ironic, that. 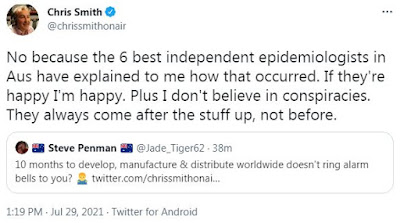 This tweet is confirmation that he doesn't apply critical thinking to the vaccine safety issue. Instead, he leaves that up to "the experts".

But what about all the other experts who disagree, as well as abundant official data about how these jabs are the most lethal on record?

This is basically just false equivalence with a dash of nostalgia.

Here he doesn't want to consider the role of the mainstream media. They should be holding the powerful to account, speaking truth to power. That's their job, after all.

But they've gone completely AWOL. That's another thing he doesn't wanna be reminded of. So, he just reverts back to the line that it's not worth fighting because everyone's doing it. But that's how lemmings "think", innit?

This seems to imply that everyone at Sky News has been "vaccinated" already. I suspect that they've all had immense pressure on them to get the shot, or take a hike.
Looks like they've also been told to promote the "vaccine" rollout, or at least not question it. All of them seem to be evangelists for it. Even Alan Jones, who has been highly critical of the insane excesses of government both state and federal when it comes to how they've dealt with this "pandemic" has said that he himself has been "vaccinated".
But back to Chris Smith's legal threat: Why would he sue someone? If the shot works, then those who haven't had it aren't a threat to those who have, right?
This is why the push for everyone to get it is utterly absurd. But it also shows that deep down he doesn't have confidence in its efficacy.

Translation: "I for one welcome our new globalist fascist overlords."

American actor and comedian Michael Rapaport is a different kettle of fish. He seems to have accepted he made a bad decision. And now he's pissed off that he was lied to.

Interesting how this whole scam reveals the character of people, innit?

Posted by MattHaydenAU at 12:19 PM