Time is on our side

It's clear from the events of the last few days that Dictator Dan, Gladys Kevorkian and their creepy mates are really upping the ante to crush dissent. And they have got the 'rona fear propaganda machine running on overdrive. This is all to manipulate as many people as possible into voluntarily getting the jab.
This tactic seems to be working to some extent for them. They say that record numbers of people are now being vaccinated. But given how often they lie about the extent of the disease itself, I'm skeptical about these claims ... One thing's for sure, the escalation scares people away from the needle as well as drawing them to it.
Remember that what's happening now is "soft" fascism. It's bad, yes. But it's not yet balls out, boot stamping on a face forever stuff. They're not dragging people from their homes and holding them down while injecting them. They want you to think they will do that. But will they?
This is unlikely IMO. They have put all of their eggs in one basket: deceiving the population into lining up for the shot voluntarily. When enough people realize the enormity of the lies they're telling to trick them into doing that the pollies won't meet their KPI of at least three quarters jabbed. The more extreme they are in their tactics and the closer we get to summer, the harder it is for them to achieve this goal. That's why we've got to hold the line.
The Government and MSM are doing all they can to demonize protesters at those big rallies on the weekend. Of course they will try the "superspreader" angle. 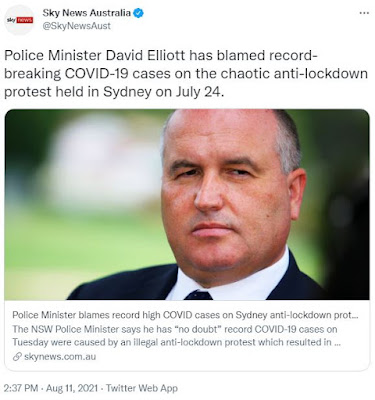 They did this after that big demo in Sydney last month. That scared the crap out of them.
The Police Minister claimed that rally was a superspreader event. So did he produce the detailed contact tracing records from his crack team of "virus detectives"? Of course not. 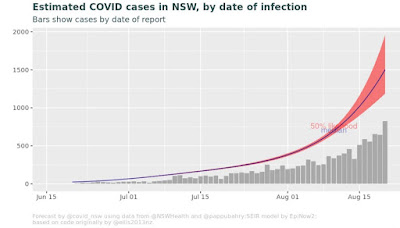 The graph above makes clear that there was no spike in infections after July 24. Something tells me there won't be one in coming weeks either, even though the the corrupt, controlled MSM are already promoting this narrative.
As we know, the brazen extortion they're using is to push us into the vaccine passport system. But even if they manage to do that there's still hope.
Look at what's happening overseas, especially in France. Not a lot of people are going to places that "have done the right thing" and installed fascist tracking systems. I've seen plenty of photos and videos of empty cafes and restaurants.
The same fate awaits Aussie businesses who go all in with this system. They think it'll be the best move they'll make because they believe the corrupt government and MSM. But the reality is the opposite.
Those who are unjabbed won't be allowed into these establishments, of course. So if the seventy percent threshold is actually reached, that's over a quarter of business gone. Also, many jab-free folk will never forgive these businesses for excluding them. They're lost for good, even if passports are dumped eventually. Many jabbed'll avoid them on principle too (this is a real trend in France). Also, given that the vaccines aren't effective in stopping transmission, some of these venues could end up being "outbreak" sites due to "breakthroughs".
There are numerous downsides to this insane system. This is obvious, which is why I think there'll be a real push from business groups to stop their implementation.
Then there's the booster issue. It's becoming undeniable that these will be part and parcel of the vaccine passport system if implemented. Gotta keep your synthetic "immunity" up to date, now don't you!
Also inevitable will be some double jabbed who resist, saying: "That's not what I signed up for!"
If and when that does happen, count on MSM outlets labelling these people "anti-vaxxers". They are nothing but Big Pharma's lying little bitches, after all. 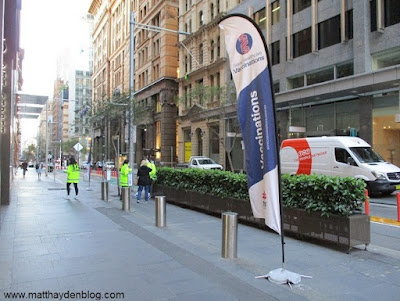 Then there's the question of whether that critical percentage of jabbed will ever be reached in Australia.
I have my doubts about the figures that Gladys, Brad and others are touting at their daily pressers. Above is a vaccine hub in the middle of the Sydney CBD (Pitt Street). As you can see, it's pretty much deserted. I've gone past there several times. It's usually like that. On one occasion I saw about seven people.
I know that there are heaps of people getting jabbed elsewhere, especially in south west Sydney. That's because they have to submit or lose their jobs. Some are resisting, which is good to know.
But it does say a lot that this one in the heart of the CBD seems so quiet. And whatever the real numbers are, I suspect there's little or no real enthusiasm for vaccination anymore. In the past there was. Now, there's much greater awareness of the downside. This trepidation will only increase as days go by.
So hang in there. The globalist scumbags behind this sinister campaign are losing control of the narrative. They are making massive errors all over the joint, waking up more and more people every day. In the end this is a mind war. Once enough people realize the truth, we will win.
Thanks for reading, and if you've enjoyed this piece, please consider supporting me via Ko-fi. Aussies, know your rights!
Posted by MattHaydenAU at 10:21 AM