A race to the finish lie

So obvious what's going on now. The lockdowns in Australia that have pretty much imprisoned over half the population are basically a form of extortion. The establishment politicians are all just muppets of the Cabal. They are desperately tryna meet their KPIs. The main one at the moment seems to be getting a significant majority of Aussies "vaccinated" (I'll use their term for convenience). Statements by these so-called leaders indicate that the minimum number is 70%.

But they're running out of time. Things are developing quickly in the USA with Mike Lindell's Cyber Symposium just completed. Interesting how Canberra went into lockdown when that started, eh? They said it was because of one case of the dreaded 'rona but it seems more likely they were bracing for impact.

Also, we're coming out of the coldest period of winter. Coronavirus is a seasonal illness, remember. So, with fewer and fewer people experiencing sniffles and similar symptoms, it's gonna be increasingly difficult to scare them into getting tested. (In any case I suspect they're not being totally honest about those numbers.)

A week ago Albo put out this intriguing tweet. In it he referred to ScoMo's statement about the vaccine rollout not being "a race".

Looks like comms to me. On the surface level it means millions of Aussies find themselves in this horrible situation. But it could also be a hidden message to those in the know that the normies are really starting to figure out that the whole thing is a sham.

With that comes the awareness that pollies both state and federal don't serve the citizens, but the globalists. So, best to get those needles into as many of them as possible while we still can! 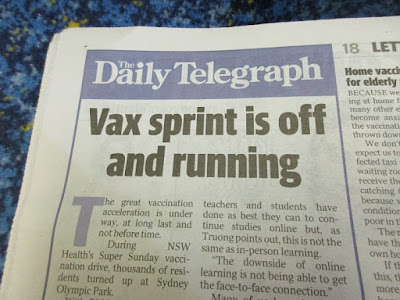 This idea of racing to get vaccines "into the arms of every Australian" has been repeated frequently in the MSM as well. Above is an explicit reference to it in a recent editorial.

You often see the same imagery being used simultaneously by pollies and the MSM. They are controlled by the same sinister forces, after all.

Allusions to the Olympics abound in the Daily Telegraph in particular. And check this out from Brad Health Hazzard.

It really is one of the most shamelessly exploitative displays I've ever seen.

He's addressing schoolkids, telling them that getting the jab is a "golden opportunity". It will be done in a stadium where world famous stars have performed. How spesh does that make the kids who roll up, eh? And BTW, parents won't be allowed in when it happens ... But don't worry. Nothing suss about it. All being done by the book.

It's creepy as. And there's a copper in a face diaper standing behind him the whole time, just going along with what he's saying zif it's all perfectly reasonable. If that clip doesn't ring alarm bells for you then nothing will.

Posted by MattHaydenAU at 2:27 PM