You're literally Hitler if you're not lining up to get (your) shot!

If you're not convinced that the utterly corrupt globalist-controlled political establishment -- with the enthusiastic complicity of the mainstream media -- have pretty much inverted reality then check this out. 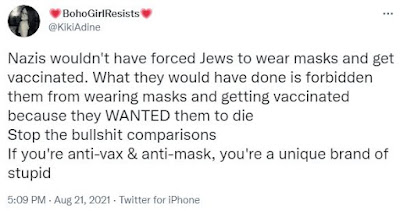 So the coppers are swaggering around Sydney and Melbourne, brutally arresting people for chatting together in parks. But they're not remotely fascist. No, they're the good guys!

Not only that, but those understandably alarmed by these tactics used by narcissistic premiers without any scientific justification whatsoever, and who exercise their basic human right to make their opinions publicly known are deemed to be the real Nazis!

Makes you wonder how people could end up with such a twisted view of reality. Obviously many factors are involved. But the mind control power of Hollywood is a big one in many cases.

It's not just the movie themes that have such an effect. It's also the perceived authority that these world famous stars possess.

Big Arnie is a perfect example of this. Below he's using one of his iconic lines from his role as the Terminator. But now it's just after he's had the jab -- or has he? So ironic given that he himself is the son of a literal Nazi.

Posted by MattHaydenAU at 5:09 PM