It's now completely obvious that all mainstream media outlets right across the board are ultimately owned and/or controlled by the globalist elite and will continue to serve their interests come hell or high water. They bitch and fight amongst each other but it's just a Punch and Judy show, not unlike what happens in Canberra with the pollies.

It's basically meant to distract us from what the puppeteers are up to. It's also part of an ongoing "divide and conquer" strategy. If righties and lefties are always shouting at each other they're all ultimately easier to control.

You see this dynamic all the time. And here's a specific example of it. 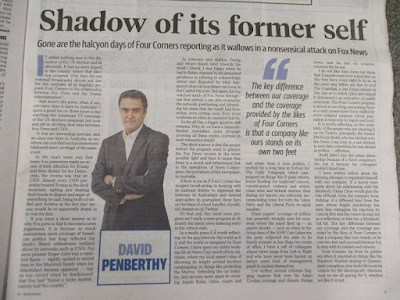 In yesterday's Daily Telegraph former editor David Penberthy threw shade on their ABC's Four Corners program for their two part investigation into Trump's "big lie" that he was robbed in the 2020 election. A key element of that "expose" was about how eeevil Rupert's Fox News aided and abetted the Bad Orange Man in promoting this grand deception.

Penbo was miffed by that accusation, given that he's long worked for outlets owned by the same parent company. So he defended his employer in the column. 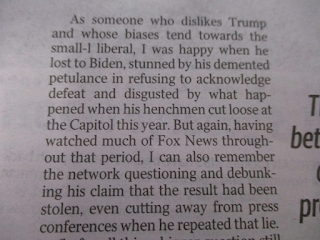 But he didn't disagree with the foundational claim of the Four Corners series, which was that Joe Biden's win was totes legit! And he threw in some mockery of DJT for good measure.

This seems to be a requirement for almost everyone working in the MSM these days. A severe case of Trump Derangement Syndrome is preferred. But at the very least you must agree that The Donald is a bloviating narcissist who can't be trusted on anything much.

This phenomenon was also on display in Andrew Bolt's column in the Daily Telegraph on the same subject. He bashed Four Corners in a similar way, also observing that Trump's claims of fraud were themselves false. The point was made almost as an aside, but it was still there.

Wonder what's gonna happen to all of these guys and their reputations if and when it is proven that Trump was right after all?

Next few months are gonna be really interesting, I reckon ...

Posted by MattHaydenAU at 5:49 PM