Credit where it's due:

Given the massive political tumult currently going on in Melbourne, an earthquake shaking the city -- even to the extent where some walls have crumbled -- seems to be some kind of spooky sign. I mean really, what are the odds?

There have been a lot of fascinating claims about earthquakes in the USA corresponding in location to DUMBS (deep underground military bases). A popular narrative is that the US military was blowing up these Deep State controlled power nodes in a fierce underground war. There was a local version of this that got some momentum several months ago.

At the time I thought these theories were all "out where the buses don't go". But now I'm not so sure. Anything seems possible. 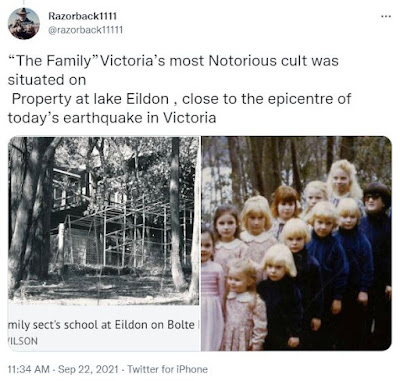 Dunno exactly what it could signify but it's certainly another interdasting "data point". 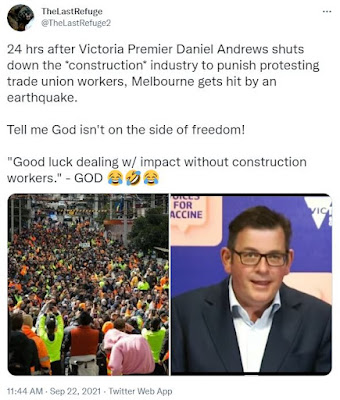 I'm not a religious person myself, but I can certainly relate to the "vibe" of the above interpretation. And Mysterious Mr Seventeen did say "it's gonna be Biblical", after all.

Also, I have a strong suspicion that Dictator Dan is an occultist himself. Definitely not on the "side of the angels" -- unless they're fallen, that is.

Given that this guy likes to flash the ol' "El Diablo" hand sign and called the Delta variant a real "Beast", I'm thinking maybe he knows something we don't and he's hinting at this to his creepy mates.

I see a lot of occult elite symbolic incantations in the MSM. And talk of a pale horse did feature in one of these lately.

Was this some kinda globalist Deep State operation to create a massive distraction to the rising tide of people power against Dictator Dan? They certainly do have the technology to do this kind of thing. But would they? Given the evil shit they've been inflicting on all of us -- but particularly Victorians -- I would not put it past them.

In any case I made a video about foundations being shaken just yesterday. Seems synchronistic somehow ... Maybe the tremors hitting Melbourne are a literal manifestation of what I was describing figuratively? Here's hoping!

If you enjoyed this post, please consider supporting me via Ko-Fi. Aussies, know your rights!

Posted by MattHaydenAU at 2:23 PM