Putting out the fire with vaxxoline

You may have heard about how NSW fireys are being trained as ambulance drivers in case they're needed in coming months. The fraudulent MSM narrative here is that as the state opens up again the extra-lethal and contagious Delta variant of the dreaded 'rona will still be striking down those poor foolish folk who aren't vaccinated along with some who are (because no jab can offer perfect protection, right?).

They'll be dropping like flies in their own homes, just as they have been, only in far greater numbers than presently. So, with emergency services maxed out they're gonna need more ambulance drivers.

Any thinking person knows that this is rolled gold bullshit. The reason they'll need more drivers is because so many people are having serious adverse reactions to the jibby-jab-jabberwocky-jabberoo itself! Given that there's been a massive, and sadly successful, government and media campaign for young folk to get said treatment, a lot of those being laid low will be millennials.

The MSM outlets all know this, and in the case of the Daily Telegraph, actually tell their readers they do, mocking them at the same time. 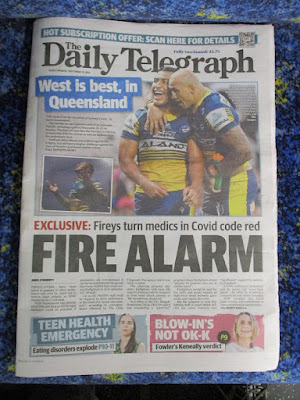 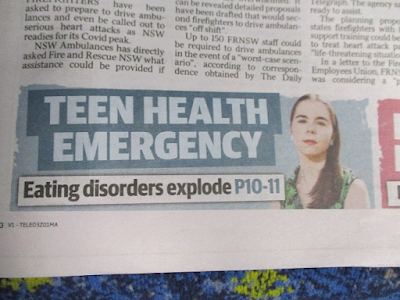 Fascinating that even though the subjects are not related, the word "emergency" is featured just below the headline for a story about ambulances, innit?

They're making a sneaky symbolic link there. It's for "those in the know" -- secret society wankers who love to chuckle at the sheeple whose lives they gleefuly ruin to further their globalist agenda. 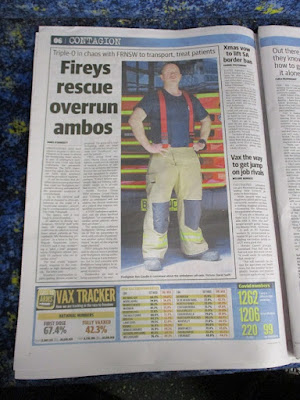 If you look at the actual story inside the paper there's something similar going on. There's a vaccination tracker directly below the photo of the firey featured. And notice how the yellow horizontal bars of the firetruck behind him are echoed in the design of the infographic underneath.

It's reminiscent of what was done with the two bottles in the liquor ad below the twin towers in another issue. 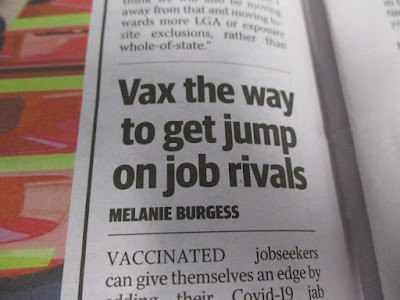 Then there's the story on the right of the page, about how jabbed jobseekers have better employment prospects. "Vax the way" reads the headline.

Way is a synonym for cause, innit?

Pretty clear that this is another case of hiding in plain sight. TPTB are not only well aware that the vax will be the reason for the rise in serious health issues (especially among younger folk). They're completely okay with it and are happy to continue the massive global fraud that "it's the 'rona wot dunnit!".

They're basically putting out the fire with vaxxoline, but saying it's water. And because they have the commanding heights of all the institutions that matter (politics, public health, FRNSW, MSM) they'll just keep repeating that lie.

Evil, obviously. Not only that, right there on the cover and inside the paper they're mocking their readers for buying it.

Brings to mind that memorable Bowie song from the movie Cat People. Certainly evokes a similar atavistic transhumanist vibe. However this bunch of occultists are more like bat people. Spread the Wu-flu, love the darkness, prolly drink blood too ...

As well as being completely bat shit.