On SkyNews recently Campbell Newman owned Stephen Conroy on the subject of vaccine passports. Conroy said that Newman didn't care about kids because the unjabbed might pass the 'rona onto them.

Newman rightly observed that so can the jabbed. It's well established that the vaccine (again, just using their term for convenience) doesn't stop transmission. So what's the effing point?

All the pro-jabbers can ever do is say, like Julia Gillard used to, "it's the right thing to do".

And why is that? Because feelings. It's basically all they've got. 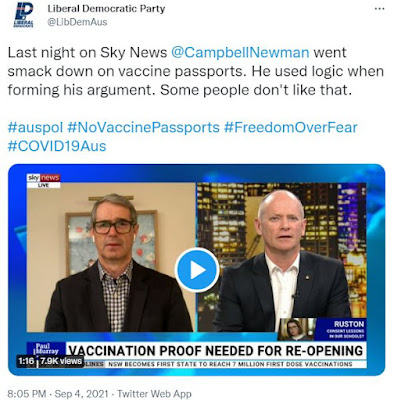 It's like when they say "because science", but can't cite any specific studies or evidence. Everything is driven by their narcissistic sense of moral virtue.

Dictator Dan now wants to "lock out" the unvaccinated. It feels right to him. But this is of course clear discrimination, a fundamental violation of basic human rights. It's therefore illegal. But he doesn't give a shit.

As well as being emotionally committed to his position he knows that the vast majority of human rights activists and lawyers won't arc up about it, showing what frauds they are. Neither will anyone in the mainstream media.

As well as the illegality, think of the irrationality. He's not even talking about those who are known to be infected, just those who are mostly healthy and haven't submitted to the needle.

Anyway, even if they were all infected, why would they be a threat to the jabbed if it works? And if it doesn't work, then why even have it, let alone mandate it?

Justin Trudeau recently said that the government needed to "protect the vaccinated from the unvaccinated". But isn't that what the vaxx is meant to do? Anyone who has even the slightest capacity for critical thought will see how absurd that statement is.

Yet not only are stupid globalist pollies and commentators pushing this line, it's the official position of public health systems across the globe. Doctors must promote it or be punished in various ways, including by being fired. So they obey.

It's amazing. This massive emotional component has long been clear in the global warming religion. But this is another level entirely.

And this time it's directly impacting everyone's lives. We're all suffering because of the lockdowns and other restrictions. And now there's this relentless pressure to undergo an untested and clearly ineffectual medical procedure -- that is causing an unheard of number of adverse reactions -- that makes no rational sense at all.

It's extremely ominous, yes. But ultimately I think it will work in our favour. If this doesn't wake up the compliant masses nothing will.

And they are waking up. The process has definitely started here in Australia. The harder these narcissistic control freaks push to implement their technocratic fascist agenda, the more people snap out of their slumber. What's going on in France will happen here for sure.

Posted by MattHaydenAU at 1:25 PM