Pubs for jabs are a slake in the glass

Pretty clear that our corrupt governments state and federal are completely controlled by a criminal globalist Cabal. Rather than buying effective medicine as needed to deal with a genuine raging pandemic, they've flipped the whole process upside down. They've committed to massive ongoing deals with "vaccine" manufacturers and have agreed to hand over the human product -- at least 70% of the "useless eaters" currently being financially farmed in Australia -- who are to be injected with syringes full of God knows what!

Hence the ongoing lockdowns, restrictions, dodgy narratives about outbreaks and all the other insane fascist BS. That's all to push the sheeple into the vaccine hubs and other jab locations (including Bunnings, FFS!) to deliver on this evil promise.

This ongoing campaign of brazen extortion is being waged on several fronts. Sinister propaganda peddling lie factory the Daily Telegraph is one of the main offenders. 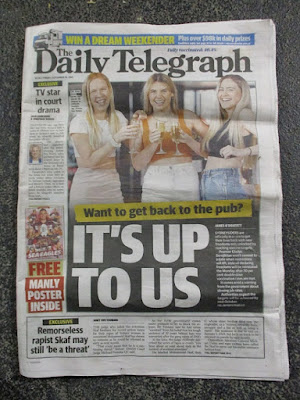 Notice how the onus is placed on the people. Rather than doing their jobs as journalists and investigating the massive ongoing crime against humanity that is the Coronapocalypse psyop, they do the bidding of the international criminals controlling politicians.

It's actually up to these "leaders" to pull out of this global scam. They could stop all this bollocks in a heartbeat. But they won't because they sold their souls long ago.

So, like other mainstream media outlets, the Sydney paper helps them dangle the reward of pleasures like pub attendance in front of their readers -- whom they routinely mock in the most sneaky, nasty and cowardly way -- to push them toward the jab. 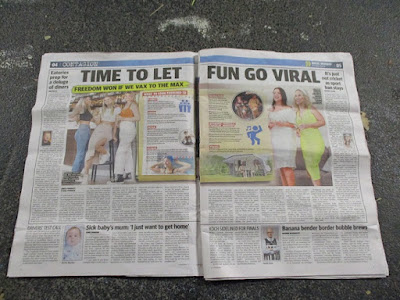 Above there's more of this sinister "hiding in plain sight", I reckon. When they say the "fun" will "go viral", at first blush it looks like a benign wordplay on the corona-context. But I think they're also hinting at their knowledge that the vaxx is actually responsible for the growth in 'rona cases. Then there are all the adverse reactions -- including death -- to the jab itself. Look at what's happened in Israel, for example.

The "fun" they refer to here is not really what the sheeple will be having. It's what the globalist elite will savour as the syringe-stuck "useless eaters" get sick and some of them die. These poor folk will have their sad fates notched up to the 'rona, not the vaxx, and the whole evil cycle can be rinsed and repeated!

Disappointingly, many pubs themselves and even the odd brewery have hopped on board this vaccination train. Take this one in Marrickville. Needles to say, Labor pollies like Albo and Shorten lapped up the opportunity to invoke champion boozer Hawkie in their shameless desire to con the sheeple into becoming jab rats. 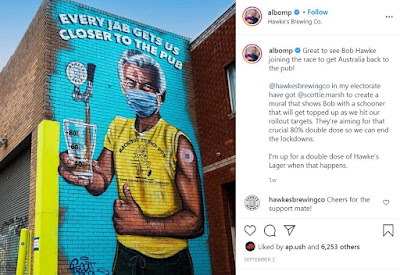 Great to see Bob Hawke joining the race to get Australia back to the pub! @hawkesbrewingco in my electorate have got @scottie.marsh to create a mural that shows Bob with a schooner that will get topped up as we hit our rollout targets. They're aiming for that crucial 80% double dose so we can end the lockdowns. I'm up for a double dose of Hawke's Lager when that happens.

When you're tryna tempt folk into an untested medical procedure with the promise of alcohol -- which has long been known to cause damage to people's social, mental and physical wellbeing -- you've totally destroyed the credibility of your claim that this vaccine rollout is truly about public health.

But that's obvious to any thinking person with a heart and a spine. And there are very few of them in Canberra, as we all know.

Posted by MattHaydenAU at 2:03 PM