If you've ever looked at my YouTube channel, you'll know that I've done heaps of videos about the symbolic subtext of many stories in the MSM, the Daily Telegraph in particular.

The reason I focus on that paper is because it's cheap to buy and the imagery is easy to spot. In it, there are several recurring patterns related to how the photos and headlines are laid out on the page. Some of them are deeply sinister and they'll often take a symbol and play variations on it. I've described an example of this in the clip embedded at the end of this post.

Here's another case in point. It's from the day after ScoMo's laughable "V-Day" launch of the vaccine rollout. The very fact that he chose this analogy is a real rabbit hole in itself. Maybe I'll get around to explaining what I mean by that in another post. But for now, I'll just focus on one aspect of the story on the day. 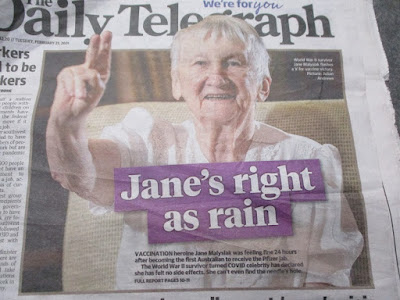 As you may recall, Jane Malysiak was the first recipient of the vaccine rollout. This was the cover on February 23. 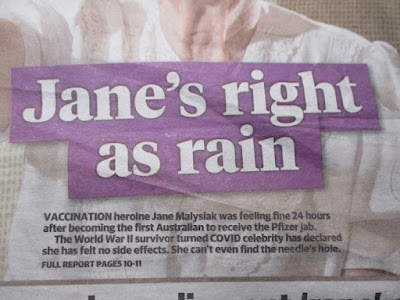 I found it fascinating that she was described as a "vaccination heroine". Such an interesting use of words ... If you remove the last letter from "heroine" what have you got? Heroin, the drug. And how is it most commonly administered? By syringe, of course.

So, the symbolism seemed to imply that vaccination was a kind of addictive opiate as much as anything else. As we all know, addicts frequently die from overdoses.

I know some people would think I'm reading way too much into this one little aspect of the cover story. But given how often these involve hidden meanings, often of a malicious nature, I think the interpretation is valid. 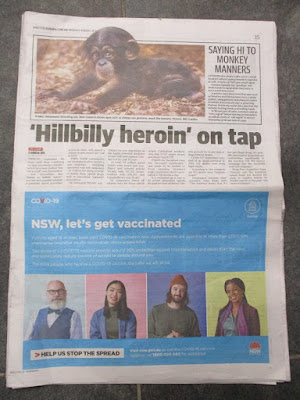 Above is another, more recent example of this association (August 16). The term "hillbilly heroin" refers to prescription opioids such as Ocycodone that can give the user a cheap, legal high. The story describes how 12 Aussies die every week as a result of overdosing on drugs like this.

Directly below the item is an ad encouraging people to go out and get vaccinated. What are the odds?

Also, at the top of the page is a story about how chimps and bonobos have a kind of etiquette that they observe in social interactions. So the article is specifically equating people and primates. (It also reads "saying hi". And what does a shot of heroin give you?)

Now this may be a stretch but again it's possible because of the pattern of symbolic association the paper employs so often: What do privileged "city slickers" think of "hillbillies" ("bogans" in local parlance)? That they're subhuman, not unlike apes and monkeys.

Add to this the fact that the global jab campaign is basically a massive ongoing experiment. Greg Hunt is actually on record saying that the vaccine rollout here is part of the world's largest clinical trial.

And what species is often used in animal trials? The chimpanzee.

See the subtext? It's basically mocking the jabbed. It's saying: "You're just a bunch of lowlife apes being used in a medical experiment, and some of you are gonna die. But you'll do it, because we've got you brainwashed."

Posted by MattHaydenAU at 1:52 PM