Things are really coming to a head now aren't they? The globalist elite are clearly tryna lock in as much of their control system as possible in a very short space of time.

They've got their muppets Dictator Dan and Gladys Kevorkian saying the most outrageously fascist things in pressers and ramming through orders that are quite clearly discriminatory, and therefore criminal.

And I'm sure you all heard about Kerry "Tears For Fears " Chant using the term "New World Order" unironically. As Latho confirms, this was intentional. 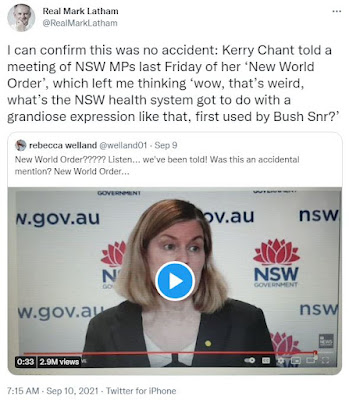 Brad Health Hazzard has also used it publicly in reference to the 'rona.

I get the strong impression that they all know they've well and truly crossed the Rubicon. But they don't care because their totalitarian system is now in place or soon will be and they won't be held to account according to the rules of that old quaint democracy we used to be so fond of.

As well as pollies using this term, I've seen it in the Daily Telegraph recently. It was in a story about new high tech policing systems being used to catch crims. 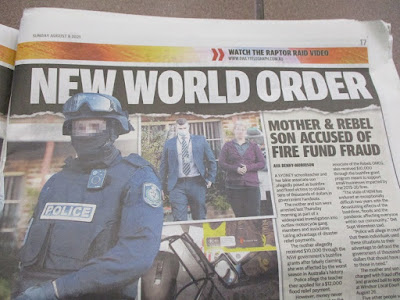 So, it's no longer a conspiracy theory, eh?

The public use of this "NWO" term, along with all the other mandated madness, makes it seem like they're working to a strict deadline. It's as if they're tryna get as much of this insane stuff through -- telling us that it's part of a global irreversible paradigm shift -- before some crucial date.

And I think that is September 11.

There's a fascinating theory popular with many truthers that the false flag terror attacks twenty years ago were not just an "inside job" by the Deep State to further the globalist agenda. They were also a kind of occult mega-ritual; a mass sacrifice to Moloch. That's why the date was so significant.

I tell you, after learning quite a bit about how utterly batshit "the creepy cult that rules the world" is, I wouldn't be surprised if this ongoing "Coronapocalypse" psyop is running to a strict occult calendar as well.

With that in mind, here's a little data point that you may find interesting. 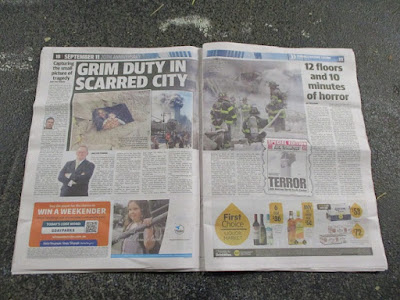 The Daily Telegraph definitely has form for occult elite symbolism. One of the tricks they use quite often is to place ads next to headlines and images to convey a subtextual meaning. (Please check out this post, which describes in detail what I mean. You'll see how creepy and wrong it is, and that I'm not making this up.)

I think they've done it again with the spread shown above. It's from today's issue about the twenty year anniversary of 9/11. 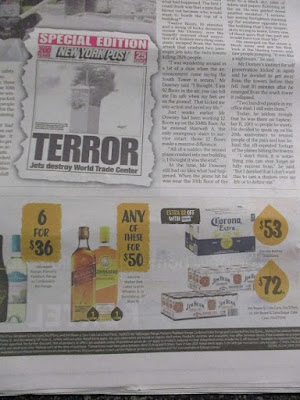 Look closely at the two bottles in the ad directly underneath the New York Post cover photo. They line up closely with the buildings. Think that's a coincidence? No way.

This reminds me of Dictator Dan's inclusion of clearly symbolic photos of what he was drinking when he tweeted that he had gone "higher up the shelf". Please scroll down to the bottom of that post and you'll see what are very likely allusions to that horrific event in 2001.

Similarly, I reckon that the bottles in the ad above are meant to symbolize the towers. Then look what's just to the right of them: Corona Extra. 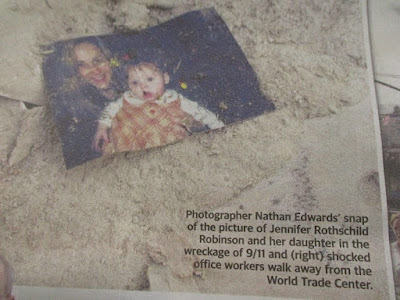 The story goes into detail about how a photographer found a photo in the rubble. Who was it of? Jennifer Rothschild Robinson.

Rothschild is a very recognizable surname, innit? Brings to mind elite banking families who featured in conspiracy theories about 9/11 back then. They're also key players in truther narratives about what the 'rona is really about now.

So, maybe that's why the photo was highlighted in the spread. Another sneaky thematic association, you reckon? I think that's quite likely.

And if I'm correct, it all makes a sinister kind of sense, dunnit? The destruction of the World Trade Centre buildings was seen as a major step towards bringing about the New World Order. So it's plausible that globalist occultists would savour making that association symbolically in plain sight, knowing that the vast majority of normies ("useless eaters") remain none the wiser.

Posted by MattHaydenAU at 6:38 PM