It astonishes me that some people still can't see what's so deeply creepy and wrong about the relentless, all pervasive campaign to "get needles into the arms of every Australian".

One particularly absurd feature of this is TPTB telling us we can go back to the pub when we get the jab. Alcohol and public health make very strange bedfellows. Sure, a glass of wine a day may ultimately be good for you. But there is no dispute about the damage booze can do to a heavy drinker's health over time.

That said, the hospitality industry is not recommending you do it on health grounds. They're just playing their part in the massive ongoing extortion campaign. And they're being extorted as well, having been shut down by globalist-controlled pollies.

Still, where are all the mainstream health journalists -- especially on their ABC, who for so long have railed against booze, and the appalling Aussie bloke's love of beer -- condemning this push, or at the very least pointing out the irony? There are none AFAIK. On the contrary they're supportive of this kind of pressure.

And there are so many things for them to take issue with -- this ad, for example. 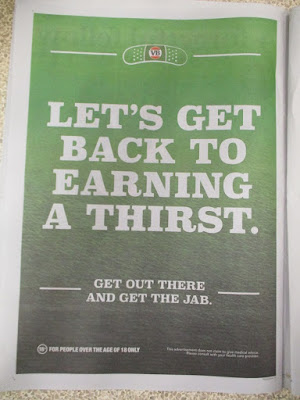 It really cracks me up. You have a beer company telling you to submit to a medical procedure, and have an untested "vaccine" put into your bloodstream. That just brings to mind yet another layer of irony.

Even by the most conservative analysis, the jab is clearly more lethal in and of itself than the most concentrated alcoholic drink. How many people have died as a direct result of guzzling bulk plonk? I'm sure it happens. But it's extremely rare. As mentioned above, alcohol related death usually takes many years to occur.

But that gene therapy via syringe? That can kill you stone dead all on its own. Official data from the USA and EU proves that many thousands of people have died this way since the global rollout began.

You aren't allowed to drive if you have a blood alcohol level above a certain limit. But now we're careening towards a society in which you can't participate fully unless you have a minimum blood-vaxx level!

This is one of the many reasons the argument used below is so ridiculous. 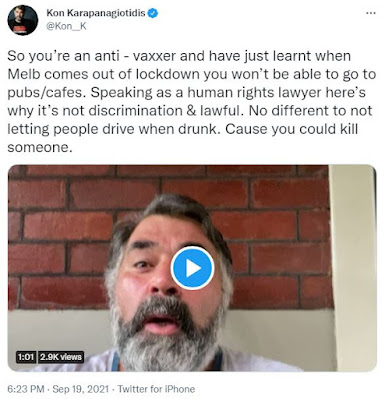 Obviously, so much of this madness is driven by Big Pharma's aim to make as much money as possible from the "pandemic". But the globalist elite's desire to have complete power over us is the bigger driver. They're pushing on with their demented plan to install a worldwide fascist technocratic control system. And narcissistic idiots like Dictator Dan and Gladys Kevorkian are dutifully carrying it out for them on the state level.

They always had a thirst for power. Now they get to satisfy that, big time. But as any dipso knows, the feeling of satiation is only temporary. They have to keep topping up that glass. As Dan would say, they're getting on the beers every day of the week. With these intoxicated hoons at the wheel, a bloody crash is inevitable!

Posted by MattHaydenAU at 11:02 AM