As I'm sure you're well aware, all across the world nurses are choosing to quit or be fired rather than getting the jab. Yet for over eighteen months they bravely stood in 'rona harm's way, never flinching. In the MSM they were universally lauded for their bravery as frontline heroes. And it seemed that next to none of them of them resigned during that whole time.

Yet now, a sizeable minority of them would rather lose their jobs than get "vaccinated". Pretty clear what they see as the greater threat, eh? And they have expert knowledge along with extensive personal experience informing this decision.

This is yet more proof that the relentless push for all to "get the jab" is not really about science and protecting people's health. It's all about giving globalist technocrats total control of every aspect of our lives. 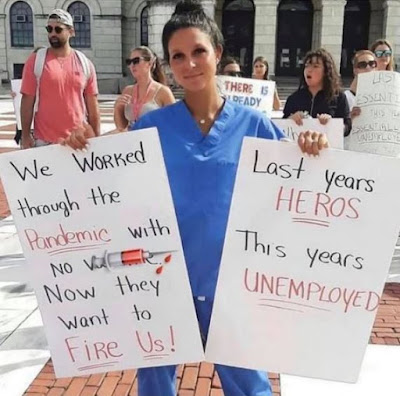 And look at the contempt with which these hardworking and compassionate people are being treated now that they're not following the script. It's just disgusting.

Nurses more than any other group have been the best and bravest in calling this crime against humanity out right across the world. There are some brilliant and courageous doctors of course. But the sheer number of nurses fearlessly spreading truth is quite amazing.

Being right at the coalface they really know what's happening, and genuinely care about their patients. Several of them have given jaw-dropping interviews with Stew Peters (on Rumble). I urge you to scroll down his main page and check them out.

These people, mostly women, have the most to lose by speaking out. Yet more and more of them are doing so. Inspiringly, it's happening in Australia too. 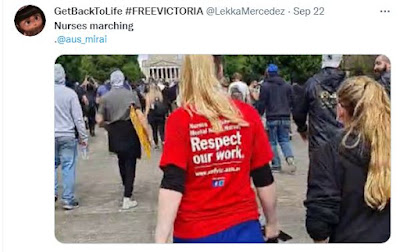 The PC sisterhood are silent on this issue, of course. It's like what's been happening in regards to transgender rights. Many of those feminist trailblazers who were so lauded by the media in years past are now labelled TERFs and derided as hateful bigots. But really all they're doing is being true to their beliefs, and accepting the reality of sexual dimorphism.

And it's not surprising that this callous dumping of former allies is happening now in regards to the 'rona. It's the way the globalist elite roll. Driven by a death cult, they ruthlessly manipulate the political level of world affairs to further their demented, evil agenda. Cultural Marxism is one of their favourite methods to use in this sphere.

I really feel sorry for these brave people who have lost so much for speaking out. But there's a positive side to all of this. They wake people up and inspire others with their courage. And the more who stand firm, the more will join them. Thanks to them, the resistance is definitely gathering momentum!

Posted by MattHaydenAU at 6:14 PM