I wrote earlier about how it's worth paying attention to the number of well known people who have gone out and been jabbed, and then report serious adverse reactions. Here's another example from the US.

The fact that someone as fit and strong as Oscar De La Hoya could end up in this situation is significant. The pro-vaxx crowd would see it as an illustration of how serious the 'rona situation actually is, of course. He'd be even sicker if he didn't get the jab, they'd say. 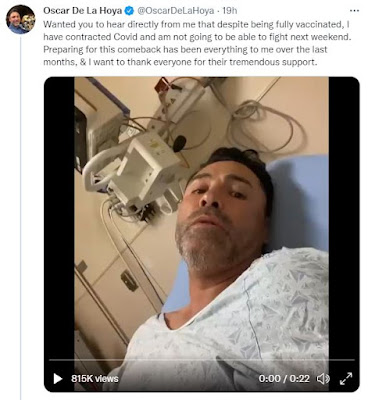 But that's irrational. How could you possibly know that? It's the kind of arse-about logic that has justified these destructive lockdowns.

"But think how much worse it would be!" That's so retarded. That's what Aztec high priests would say as they collected the kids to sacrifice to the weather gods. "We must do this or the crops will die!"

And when the crops died anyway? "Well, we all dodged a massive ... spear. The sacrifice stopped the frog plague as well, didn't it!"

But getting back to the poor bedridden boxer, it might just be that it was the "vaccine" itself that was to blame for his condition. Could this be a classic case of ADE? It's possible.

In any case, his plight punches a big fat hole in the case for jab mandates and vaccine passports. 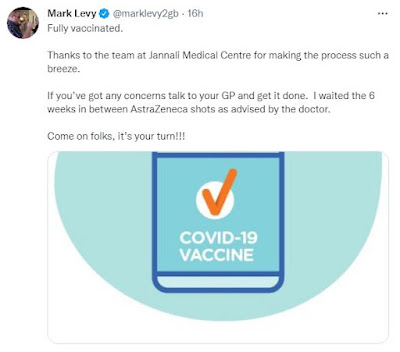 Mark Levy is a passionate Aussie sports fan and broadcaster. He's taken the plunger, and expects everyone else to follow suit.

To him I'd say, no thanks. But he can have mine if he wants.

Actually, he's such a fan, he should even stock up on the stuff. That'll help take the weight off the public health system, won't it? Tears for Fears Chant even said everyone's gonna have to get boosters indefinitely anyway.

Of course he and most local blue checks don't understand why so many are avoiding the jab. These slebs were not elevated for their critical thinking abilities, after all.

In any case he's not nearly as fit as Oscar, which worries me. I hope it's not the case that things go pear shaped for him sometime down the track. But I suspect they might. That's because I think he was one of the blue checks who got the actual concoction injected, and not a placebo.

I believe many famous folk -- particularly those in the upper echelons -- have actually done the latter, which reflects very poorly on them.

Posted by MattHaydenAU at 2:39 PM