5G that'll knock your socks off!

The Daily Telegraph has form for "hiding in plain sight". The fave symbols of creepy globalists appear on many pages in each issue. And it's not just in the stories themselves. Ads are often placed next to articles to help convey certain themes, many of which are deeply sinister.

Given these patterns, I found this page in last Monday's issue (27/9) interdasting. As you see, there's a piece that's basically glamourizing the jab. 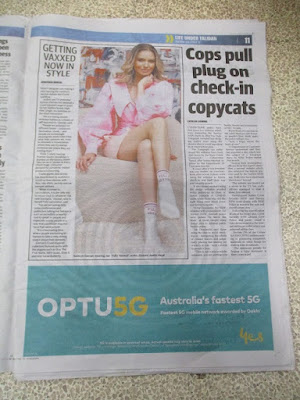 An attractive sleb with her own fashion label is showing off her new line of socks proudly proclaiming her "fully vaxxed" status. 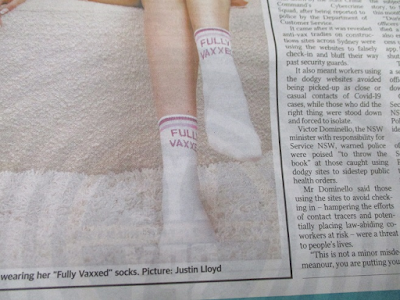 The paper really loves their shoe and boot symbolism, so I'm not surprised that they've gone for this story and photo.

The item's placement next to a story about QR code check-ins being subverted is notable. This brings to mind the fascist "vaccine passport" control system that many governments around the world are so desperate to implement.

And look below the sock story. There's an ad for 5G. As I'm sure you're well aware, deranged "conspiracy theorists" such as David Icke believe that the jab rollout is a crucial part of a hellish plan to have the vaxxed hooked up to AI via nanotechnology secreted in the mysterious material injected into them.

Maybe this theory isn't that far fetched after all, and the editor is slyly signalling to those in the know that this totalitarian system is just about ready to be implemented? 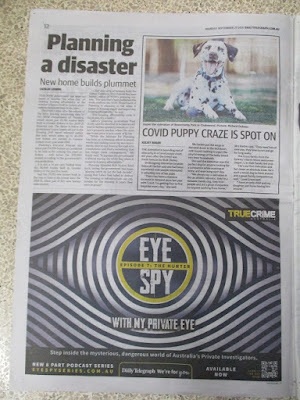 In the sock story you'll also notice the "illuminati eye" coming through from the other side of the page. The woman's left foot is exactly where the pupil is located. I think that is a coincidence, but it's still pretty spooky given the concept of an "all seeing eye" and the idea of 5G being used for surveillance.
Also, above that infamous symbol, which is an ad for a true crime podcast, there's a blue dog. (That's because both its collar and ball are this colour.)
And look at the headline just next to the pooch. It could be seen to imply that the dog is up to no good. That's not an accident IMO because the motif seems to signal some kind of evil being practised that furthers the globalist agenda.

Posted by MattHaydenAU at 12:30 PM