Absolutely insane what's going on right now. And not just crazy, but inverted. We have Australian governments state and federal along with the entire MSM tryna coerce absolutely everyone in the nation (kids included) into becoming jab rats and agreeing to get boosters until they cark as a condition of participating in wider society. As some have quipped on Twitter, aren't you supposed to donate your body to science after you die?

Up until recently the definition of normality was not being a human pin cushion. Now, it's the "purebloods" who are the outcasts.

I tweeted on this subject a few weeks ago, observing how bizarre it was that the unvaccinated are seen as the new lepers.

And not long after that I saw this tweet about an article by Derryn Hinch. He retweeted it, natch. 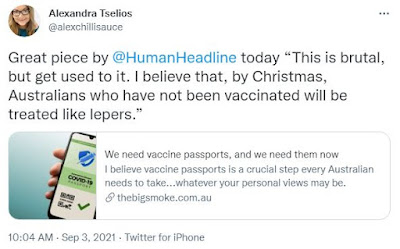 So he, basically said exactly what I did. But he reckoned it was a good thing. Well FMD!

Other blue checks have made a point of showing their disgust for those evil, dirty unjabbed. 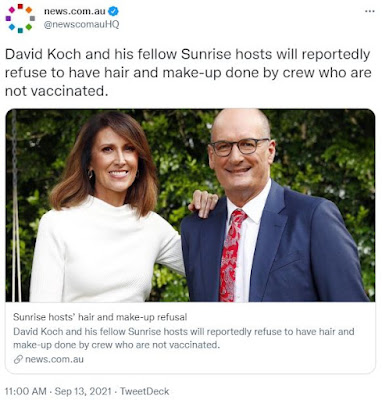 Gawd. As well as being blue check syringe fodder these laughable arsehats are so seriously afflicted with the globalist mind virus that they are pathologically afraid of the healthy. Sick!

At least Derryn admits that his view about the new lepers is "brutal". I think the scene below captures the Human Headline's inner torment about the prospect of us being ostracized in the way he describes ...

Posted by MattHaydenAU at 10:38 AM