The news is fake because politics is a puppet show

Sure you've heard of the expression "politics is showbiz for ugly people". There's a lot of truth in that. It's certainly scripted, and the pollies themselves are reading lines much of the time. And I think the fraudulence is often worse than that. They are not just actors but puppets. What we are told is real by the mainstream media is actually more like a Punch and Judy show!

So when it comes to politics the news is usually fake because the pollies themselves are. And the editors will even tell their readers that in a coded way.

Take this recent Daily Telegraph cover. It says that the by-elections resulting from the resignation of three NSW "operatives" comprise a "triple threat". This is actually a well known theatrical term meaning a performer who can sing, dance and act. 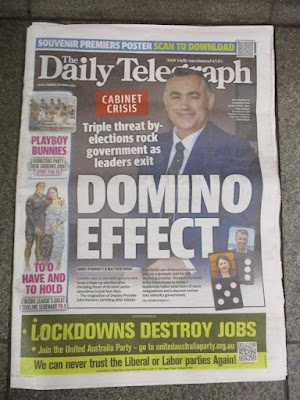 The cover story begins with the words "chaos rules". And that's what this is all about. The globalist elite puppeteers love using this method to get their way. It's called "ordo ab chao". Shake everything up and you can then advance your plan to come in over the top with your top-down totalitarian control system. 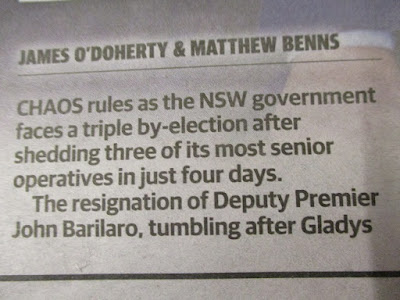 The Sydney tabloid recently used this combo of "triple threat" and "chaos" on the cover another time. That was to do with all the upheaval down in Victoria including that very suss earthquake. I talk about this in the video below.

If you've enjoyed this piece, please consider supporting me via Ko-fi. Aussies, know your rights!