The New World Order is Brad (for your health)

It always cracks me up how woke folk say the "New World Order" is just some kinda fever dream of nationalist "Nazis". But it really is a thing. The globalist elite who wanna bring it about have left symbolic signs all over the joint. There's also heaps of other documented evidence that many extremely powerful people have been working towards a top down, centralized one world government for a very long time.
And in a recent press conference about the dreaded 'rona Brad "Health" Hazzard dinkum said "this is the New World Order". 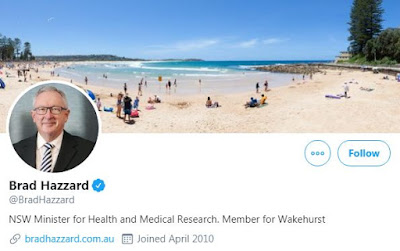 Oh, but everything's organic, there's no orchestration. Anyone who says so is a batshit conspiracy theorist ... FFS.
Pollies from Liberal, Labor and of course the Greens have been shamelessly beating up the fear over COVID-19, and implying that a global monitoring system and widespread vaccination are necessary for our safety. The MSM have been assiduously aiding them in this creepy campaign.
Sleb quacks like Dr Vaxxie McNeedle, along with various "public health" officials, have been working their clackers off to terrify Aussies.
Do you recall any of them saying "build immunity with exercize", etc? Nup. It's always: "Be scared. Get tested!" (That's so they can inflate the case numbers, obviously.) 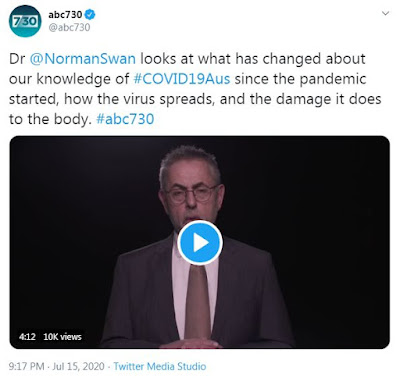 Poor Dr Vaxxie clearly reckons COVID-19 is the greatest threat to humanity right now -- even worse than global warming (remember that?).
But IMO he's got a more serious affliction. It's a kind of mind virus otherwise known as Trump Derangement Syndrome. 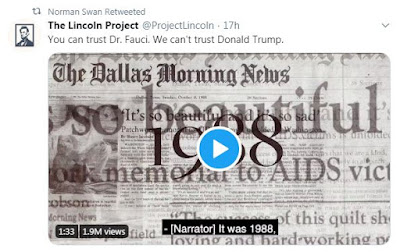 And he's certainly not the only one. It's infected heaps of blue check slebs right throughout Australia's fake news establishment.
POTUS really triggers the PC Left for various reasons. One of the biggest is that he's a proud nationalist. And they are all fully paid-up, card carrying globalists.
During this whole COVID-19 saga they have all been tryna stress us out as much as possible. It's like the Government, Opposition and MSM are actively promoting ill health. And they wanna make us all sick!
This creepy campaign of theirs is being run right across the country. But it's clearly most extreme in Victoria.

The CHO there recently said the situation is likely to get worse. It's almost like he wants it to be this way. This constant doomsaying is a feature of so-called "public health" officials. They routinely pump out fear pawn, suggesting yuge body counts -- which never seem to materialize. Shouldn't they be more reserved and reassuring?

No family will be spared? So he's implying that everyone in Victoria will have a relative who carks it from the dreaded 'rona ...
What utter bollocks. There have been a few deaths, most if not all of elderly folk. That was an insane statement to make. Did this "journo" or any others call him out on it? Doubt it.

Really, the CHO was just pulling numbers out of thin air. There's no way he can prove this. Statements like this are just meant to terrify, thereby justifying the fascist Melbourne lockdown.
He makes a mockery of his post. His conduct will erode trust in his profession, and bigly. When this is all over many Victorians will run away screaming from anyone with a stethoscope!
And now Dan Andrews has just upped the ante by ordering that masks must be worn outside at all times. Many know that doing so in the vast majority of situations is medically pointless. The directive is just a psychological control tactic. But they still believe "public health" officers and their scary stats zif they are infallible.
But if Dictator Dan and his ilk are happy to deceive people to exploit this "pandemic", why wouldn't they lie about how serious it was in the first place? 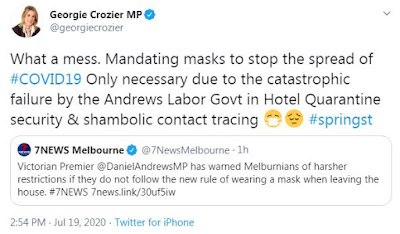 FFS. It's not a stuff up. It's all going to plan!
How many people have actually died in Victoria lately? Apparently there are around 14. Sad, but nothing compared to other ailments. And remember, these people have died "with" and not necessarily "from" the virus. Also, think how inaccurate the tests are ... This is one small part of the biggest medical fraud in history which is ultimately being orchestrated by the World Stealth Organization.
Sally Rugg is a full-on PC leftie and prolly a big time Dan fan, but she makes a good point here. 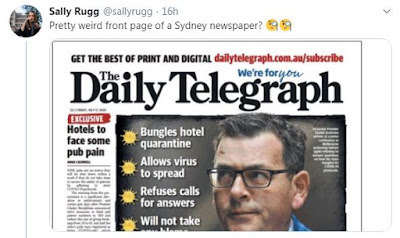 This "Doofus Dan" narrative, combined with lots of other MSM coverage about "super-spreaders" crossing the border from Victoria into NSW, along with Brad Hazzard's comments described above looks very much like pre-emptive programming.
I suspect the plan is to reimpose a full lockdown on NSW, along with mandatory masks. Hopefully people in this state, who haven't suffered years of leftist indoctrination like Victorians have, will resist this sinister push and Gladys will ultimately choose to dump it. We'll see.
In any case, all this stuff is clearly not organic. If you actually believe the bollocks that we're being fed day in day out, that's just sad. And you really oughta pull your head out of your clacker now! If people don't wake up and resist there will be much, much worse to come.
Thanks for reading, and if you've enjoyed this piece, please consider supporting me via Ko-fi. Aussies, know your rights!
Posted by MattHaydenAU at 3:28 PM