Stand by your Dan

It's pretty obvious to all sane adults that PC lefties suffer from arrested development. It's like they never got past the "terrible twos". They think everything is all about them and their precious feelings. If they don't get what they want they throw massive tanties.
As they age their behaviour might appear more mature on the surface, but underneath the same psychological dynamic is at work. Because of cultural Marxists' long march through the institutions, their collective narcissism has infected pretty much every profession. It's particularly prevalent in politics and the MSM.
A disturbing feature of this emotionally retarded worldview is idol worship. The woke fixate on certain individuals and shower them with praise with the same fervour with which they demonize their most prominent opponents. They just flatly refuse to see any fault at all in those who claim to be their saviours. Their enduring adoration of Che Guevara is a good example of this.
There's something similar going on now with Dan Andrews. Sooo obvious that this cat's paw of the globalist elites doesn't give a rat's clacker about the welfare of his fellow Victorians. He's just doing the bidding of the World Stealth Organization by locking down the state over this "outbreak" of coronavirus.
But the globalist fan bois are so deep in denial they tell themselves that not only is he doing the right thing, he's really compassionate as well! Take Julian Blindside here:

No mention of all the businesses that have gone belly up as a result of Dictator Dan's insanely OTT directives. Then there's the severe ongoing stress this psychological torture has caused millions already, with no end in sight. And think of all the trauma inflicted on kids in particular! It will scar them for the rest of their lives without a doubt ...
Compassionate my arse! 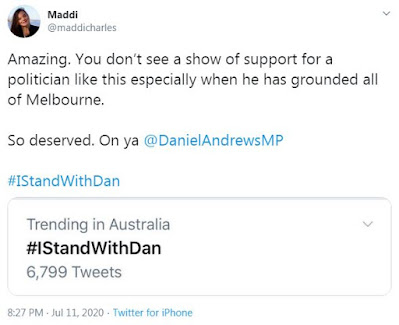 This poor woman seems to believe that Twitter is real life, and that the trending hashtags aren't cynically manipulated to reflect a right-on perspective. That said, even without the obvious algo tweaking there are clearly heaps of tragic Dan fans suffering bigly from the mind virus.
The way these poor dupes have been proclaiming their undying love for the Goblin of the South reminded me of that classic hymn to masochistic lerve "Stand by Your Man". I actually looked for that hashtag on Twitter and whaddya know, someone was dinkum using it -- and unironically to boot! 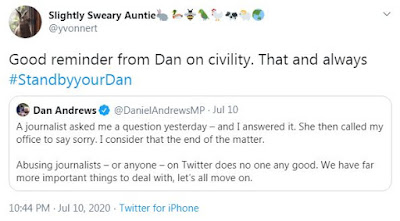