Have you heard? Eve Black is a dangerous conspiracy theorist

Really glad that there is now growing push-back against the mandatory mask directive and other insane fascist orders by the Goblin of the South. It also seems significant that most of it is coming from chicks. Maybe this is a result of the long term emasculation project of cultural Marxism, which has been particularly intense in Victoria? Who knows ...
In any case, these uppity sheilas have TPTB terrified. The globalists and their Spring Street muppets, along with the Pavlov's flogs of the MSM, are chucking "Amber Turds" all over the joint.
You'll no doubt have heard of Eve Black, who didn't do as she was told at a border crossing. So she got the full public humiliation from a tag team of malignant twats laughably calling themselves "journalists". They all smeared her with the label "conspiracy theorist". It's an ol' fave of fake news narrative coppers keen to demonize and discredit someone as quickly and severely as possible. 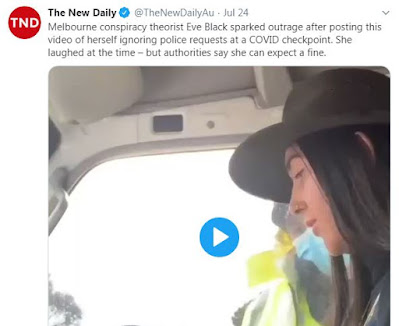 It was applied when news of her appalling disobedience first broke. And it was used repeatedly when she was finally arrested just a day ago. 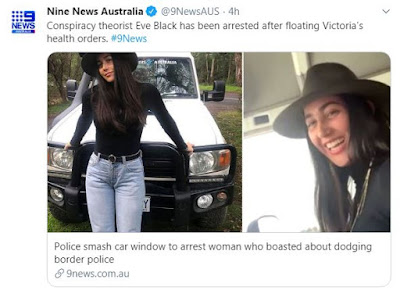 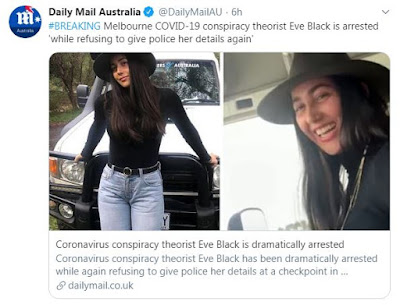 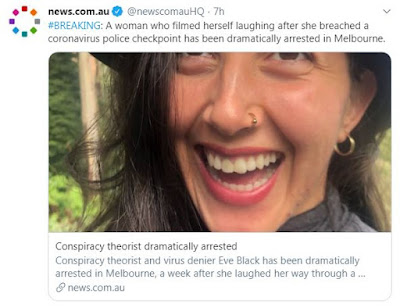 See how they're all using exactly the same bullying, silencing tactics? This is the Mockingbird Media, Aussie Edition.
The robodolts are so brainwashed they reflexively call her "conspiracy theorist". While more and more people can see through it, many don't. It can do significant damage to those falsely smeared like this. Ugly, nasty stuff. Worse, a lot of those doing this call themselves feminists.
On that note, the savage glee that many members of Twitter's trollective expressed over her violent arrest (the police were "forced" to smash her car window) was truly disturbing.
Look forward to the day that Dictator Dan's sinister psyop is exposed for what it is. That is inevitable, since the truth always comes out sooner or later. She'll be having the last laugh then, I'll bet.
In the video below are some thoughts about another chick putting mask-covered noses out of joint down in Victoria. Seems to me she might not be the full quid!
Thanks for reading, and if you've enjoyed this piece, please consider supporting me via Ko-fi. Aussies, know your rights!
Posted by MattHaydenAU at 11:34 AM