Unless you are a complete moron with your head whopped up your clacker you will have noticed that the world has gone completely barking mad lately. The coronavirus pandemic and ensuing lockdowns and other measures to eradicate it are the most vivid immediate examples of this.
Disturbingly, the mainstream media are magnifying the madness. For example, rather than investigating the validity of COVID-19 tests and reporting that there's already an effective cure for it that would completely negate the need for these insane measures, they push the fear porn around the clock.
This clear and undeniable phenomena certainly lends weight to the idea that extremely rich and powerful globalists are manipulating events and our interpretation of them from the shadows. I used to think that this "Illuminati conspiracy" was totally insane. But I'm now convinced that this "New World Order" idea has a lot of truth to it.
One key aspect of this theory is that its proponents often "hide in plain sight". One of the ways they do this is by leaving their symbols everywhere. There are various reason for this, not least because it's a way of subliminally programming the normies in advance for when they ultimately take over the world and run everything top down and centrally.
With this in in mind I've become very interested in NWO symbolism lately. I keep seeing what I think are examples of this all over Sydney. Take these mysterious green "pyramids" that the City of Sydney has placed in various locations throughout the CBD. 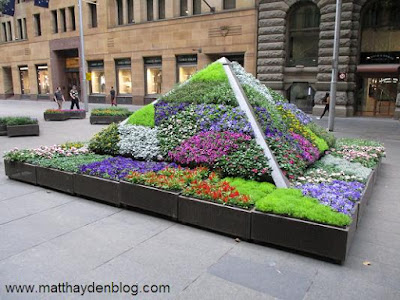 This structure was placed in Martin Place several months ago. It was clearly meant to resemble a green pyramid.
While Lord Mayor Clover Moore is an independent and not a member of the Greens party, she's certainly a full on globalist warmist like they are. So I was not surprised that this installation was reminiscent of their logo. 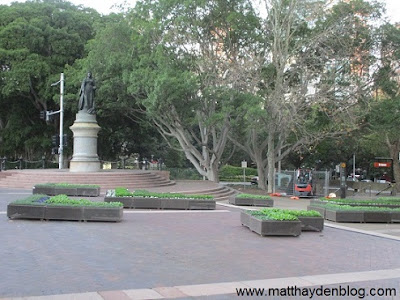 While the three dimensional structure was removed months ago, I noticed similar flat installations in several locations around the city. The thing I found intriguing about these triangular garden beds was that they all seemed to be near statues of Queen Victoria, like the one above in Queens Square, near Hyde Park. Almost all of them seemed to point in the same direction also. 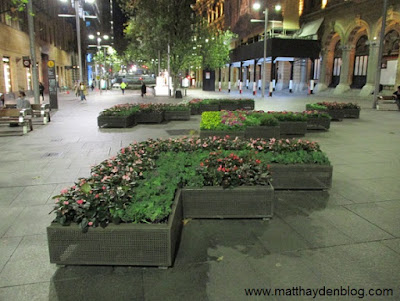 They were also right throughout Martin Place, near the Cenotaph and all the way up to Macquarie Street. 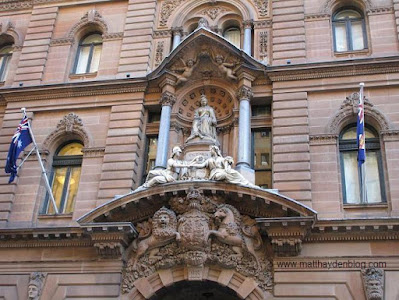 This is the statue of Queen Victoria on One Martin Place. It's directly above the Cenotaph. You can see it in a video I made around Christmas. The "tree" installed then also resembled a pyramid, and you'll see that the green one shown above was placed in almost exactly the same position.
Significant? Maybe ... 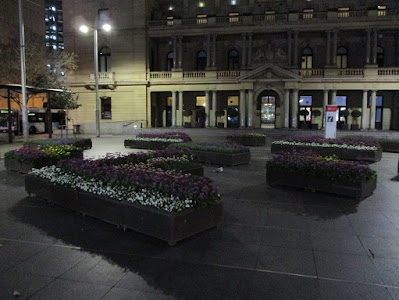 The triangular garden beds are also located outside Customs House at Circular Quay. 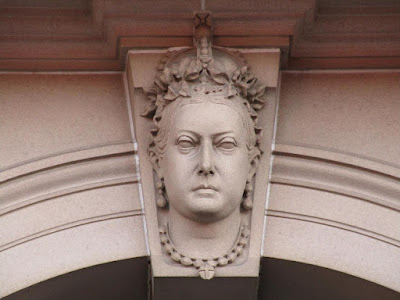 This beautiful old building also has a Queen Victoria statue, albeit very small. It's carved into the entrance. 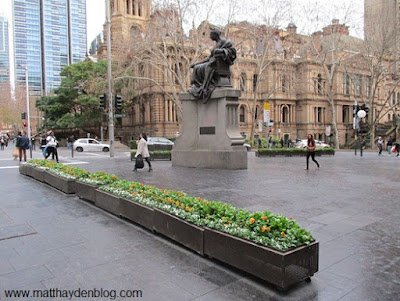 Of course, the most well known statue of Her Royal Highness in Sydney is right outside the QVB. It's an extremely busy area that must be left clear for foot traffic. So it's understandable that the garden beds nearby are not like those at the other locations.
However, as you can see from the photo, they still seem to form a triangle around the statue.
I can't help thinking that this is some sort of visual incantation that's somehow related to all this globalist madness. The fact that it seems to be focused mainly on the Australian state named after this monarch is interdasting also.
Is this Clover Moore doing her bit to symbolically help usher in the New World Order? Another Sydney politician did actually explicitly mention it the other day ...
I do have an active imagination and have certainly used it while speculating about these displays. There may be another completely innocuous explanation that is more convincing.
Still, I think I might be onto something ... What do you reckon?
Thanks for reading, and if you've enjoyed this piece, please consider supporting me via Ko-fi. Aussies, know your rights!
Posted by MattHaydenAU at 12:53 PM