Alexander Downer slams Q and A for left-wing bias

I blogged earlier about how Alexander Downer's recent media appearances -- including on their ABC -- were interdasting in the context of momentum building around the issue of Spygate. Here's another little "data point" to add to the collection:
Earlier this week he tweeted that he thought the bias against the Minister for Communications and Arts Paul Fletcher on Q and A was so egregious that Government ministers should henceforth avoid it entirely.

I didn't watch the episode. But if it was anything like all the others I'm sure the left-wing bias was totally obvious. And I doubt it was any worse than when other Liberal Party luminaries have appeared on the show.
Yet Lexie portrayed it as some kinda "straw that broke the camel's back" for him. Tweeting that he would tell ministers not to appear on it in future looks like he was tryna get a reaction. And he certainly got that on Twitter. He was "ratioed" as the saying goes.
He also provoked a reply from the host herself, Virginia Trioli. 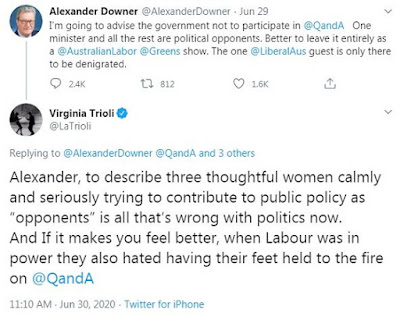 Translation: "Stop being so right-wing and conservative, Alexander! Ugh, you're such a patriarchal pale stale male ... Why, you're so stuck in your attitudinally unreconstructed ways, you'd support a misogynist bully like Donald Trump, wouldn't you!"
And there's one from ol' "Dempster Fire" himself. It implies that Downer was somehow defending deceitful attempts to slowly strangle that brave defender of democracy the national broadcaster. What a big bad meanie he is! 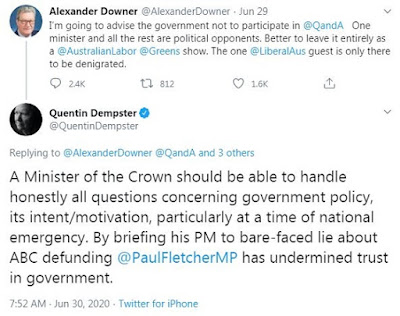 I may be reading too much into all of this. But after seeing these Twitter interactions I keep thinking: Why is Lexie making such a point of being particularly outraged about something that we've all known for ages? Also, saying that Q and A must be avoided at all costs by his fellow Liberals seems very odd when he himself has appeared on The Drum a couple of times recently (along with other ABC shows) and Malcolm Turnbull did a very soft interview with Leigh Sales, among other things.
This recent tweet does look like he's trying extra hard to remind us that he's a musty, fusty, flint-hearted Tory. And his "foes" in their ABC are magnifying that perception by defiantly calling him out for his wrong-think.
Are they consciously playing their roles here, or just getting played? I'm not sure ... Either way, Lexie's pique looks a tad confected to me.
Thanks for reading, and if you've enjoyed this piece, please consider supporting me via Ko-fi. Aussies, know your rights!
Posted by MattHaydenAU at 7:00 PM