Downer dances to The Drum-beat like a battering ham!

I wrote earlier about how I suspected that Alexander Downer has been tryna set up a clear narrative in the local MSM to help him weather the storm as the Spygate saga arcs up again, and bigly.

Now I'm even more convinced that this is the case. As well as the whole issue getting increased MSM scrutiny in the USA, Lexie's nemesis George Papadopoulos -- whose explosive claims about being targeted in an ongoing coup attempt by the Deep State and Democrats are detailed in a book -- tweeted this:

No doubt Downer knows about this scheduled appearance, which is one of the main reasons he's been popping up frequently in the MSM of late, IMO. One of his most intriguing appearances was as a panelist on The Drum.

The episode was specifically about domestic violence. As many tweeps noted, it seemed to be an extremely odd choice. 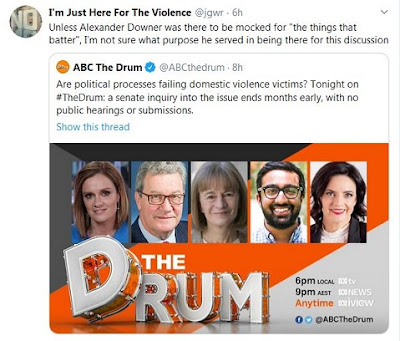 Dude has a somewhat disturbing Twitter handle -- particularly given the context -- but he does make a good point. What purpose did Lord Lexie's inclusion serve given his notorious "things that batter" comments? (BTW, this well known faux pas is listed in this Guardian piece which came out when the whole issue of his "chance boozy meeting" with Papadopoulos first became widely known. Not surprisingly, the article has a very anti-Trump vibe implying that the former Trump campaign advisor's claims are completely absurd.)

But back to Downer's appearance on The Drum: I don't think it's useful to look at what purpose he served the episode by being on it. Rather, it was about what help that particular program gave him.

Remember that much of his defence against accusations that he was "the Clintons' errand boy" rests on his reputation as a full-on Tory. And the MSM have definitely echoed this line.

That's why I reckon it wasn't just bad judgement that resulted in his inclusion on the panel of The Drum. I suspect that the outrage from PC lefties was not only expected but hoped for! And the producers certainly got their wish. 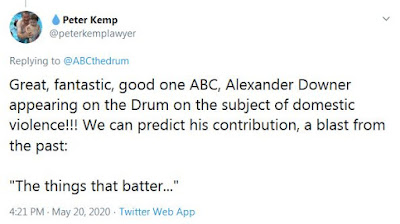 You can find many more tweets like the two above ... And I thought this one was particularly interesting.

While Julia Baird is a drearily right-on quackademic and a high profile employee of Australia's most left-leaning media organization, she is also the sister of Mike Baird, former Liberal Party Premier of NSW. They are the progeny of Bruce Baird, former Deputy Leader of the NSW Liberal Party.

Blood is thicker than water, as the saying goes. And the political establishment in Canberra (comprised of both Labor and Liberal pollies) along with the press gallery are ultimately globalist. So, it makes perfect sense that she would help Lexie reaffirm his fusty, musty, pompous patriarch image by having him on that particular episode of her excruciating show.

Then there was this appearance on The Project. 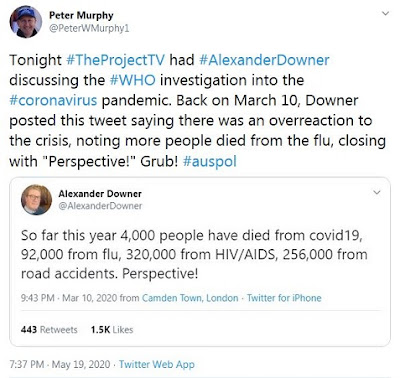 He was also interviewed about China by Fran Kelly on RN. I didn't hear it but I'll bet he was paying out on the bullying commies of Beijing big time!

Just a hunch, of course. But I think that a big part of Downer's motivation for this recent MSM blitz was to reinforce his posh conservative image in the public's mind as more and more Spygate bombshells drop. And he was knowingly assisted in achieving this goal by local MSM "journalists" and their employers. That's because they -- like their counterparts in America -- are, as Trump himself says, "very fake news" as well as being the enemy of the people.

Big booms on the way, I reckon! Developments I described in this video a few months back certainly on the cards.
Thanks for reading, and if you've enjoyed this piece, please consider supporting me via Ko-fi. Aussies, know your rights!

Posted by MattHaydenAU at 1:35 PM