The coronavirus tracking app is creepy and wrong

Sure I'm not alone in being alarmed by the intensity with which the Australian Government is exhorting us all to download this CovidSafe tracking app. After all, the coronavirus infection curve is definitely flat here now and has been for a while and Australia has had less than 100 deaths from the virus. And even that number is almost certainly inflated. There has been an absolutely titanic effort across the entire world to terrify people and it's worked brilliantly!

The data we now have shows that it's the elderly who are most at risk of getting really sick or dying from the disease. Apparently 17 of the fatalities occurred in two aged care facilities in Sydney. So why try so hard to get absolutely everyone in the entire nation to download the app?

And why do all the pollies keep repeating this stupid mantra about "keeping everybody safe"? We all know the world is a dangerous place. Perfect safety is impossible. The government can't deliver it to even one person, let alone millions. Yet they're claiming that this can be done, and with software on your smartphone! FFS.

Sure, the virus is out there. But the vast majority of people who are exposed to it will will either not develop symptoms, or get a bit sick then get better. They will have antibodies, much like those who have been vaccinated. A vaccine is over a year away, so surely this "herd immunity" is the best option, innit? (There are effective cures available but it seems that the Govt and the MSM don't want you to know about them. That's deeply suss in itself.)

And what happens if the app does detect that a user had close contact with an infected person? Well if they felt sick, they would most likely get a test, and maybe even be admitted to hospital anyway. And if not, then they'll be told to self-isolate, which is what we've all been doing for weeks on end anyway ...

And remember that even when the 1.5 metre social distancing requirement is lifted, most people in Oz will try to keep their distance from others generally, and make damn sure they don't get anywhere near someone who looks remotely like they have flu-like symptoms.

Also, there's the massive irony that those most at risk of dying (the elderly) are the least likely demographic group to possess smart phones. Even if they do, they tend not to like using them for their online capabilities.

This whole campaign is absurd. It's like frisking all the little old ladies at airport security, while letting the young and profusely sweating men wearing ISIS t-shirts go through without being checked. It's obviously not about safety but control. 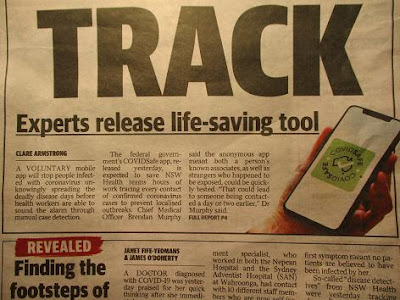 And what's the main reason given for downloading it? It will save health workers time. That's about it.

The article above quotes Chief Medical Officer Brendan Murphy, who says that it will save health workers "hours". How reliable is that figure? Well, remember that his deputy made this prediction reported on the front page of the Sydney Morning Herald in late March. 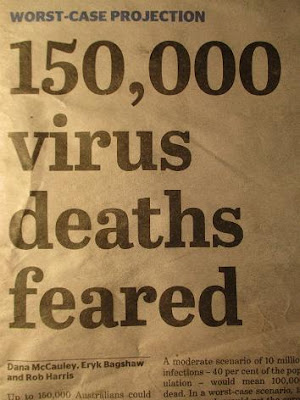 Fair to say these guys tend to exaggerate a tad. As of this writing we've had around 90 people die from (or was it just with?) coronavirus.

Do the math. He was out by a factor of over a thousand. Using that metric, the app will save health workers mere minutes. But even if he's correct and hours will be saved is it still worth it?

Sorry, nah ... By their own admission we have definitely flattened the curve. So you have people out there still getting infected but at a decreasing rate. Yet most of them are not getting sick, just developing antibodies -- kinda like if they'd been vaccinated.

So why is there such a rush to develop a vaccine -- and one that everyone in the world simply must have according to Bill Gates? That's obviously about control as well.

The app here is a crucial part of this long term globalist agenda. (There are similar apps being promoted in different countries, remember.) Persuading all the normies to download it is about conditioning them to willingly surrender their autonomy and be monitored digitally around the clock. Because that is clearly the grand plan -- and for the whole world.

It's clearly not about saving lives, it's about controlling them. Those who zealously advocate it are using your goodwill to manipulate you. So creepy and wrong! 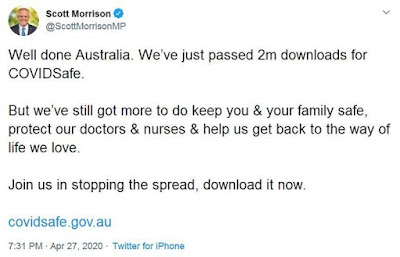 Emotional blackmail is a loathsome tactic to use on anyone, anytime. ScoMo does it subtly here. Heaps of pollies along with various slebs and other high profile media figures have been employing it. It's suss as all get out.

"Dr Vaxxie McNeedle" uses it more than a little snarkily here. You can always tell there's a hidden agenda when such transparent emotional tactics are used.

This whole project is not unlike the push for gun control in America. As we all know, horrific gun massacres are routinely exploited by its advocates. They desperately, repeatedly try to get the law changed because their primary aim is to disarm the entire population, leaving only the state armed (and to the teeth).

It's obvious that those who are most likely to go out and slaughter people en masse won't be prevented from doing so by a law. And the kind of sane, respectful folk who would give up their guns if legally required to do so are the least likely to shoot up a school.

When it comes to the CovidSafe app, those who willingly download it are the least likely to pass on the disease. They're the good people who wanna do the right thing. So they'll tend to rigorously observe social distancing -- particularly around the elderly. If they feel sick they'll go and get tested if they haven't been already. They'll do all they can to help health care workers get in touch with those they've been in contact with.

The app is completely redundant. Just as taking people's guns away is not about making people safer, but increasing the power of the state over its citizens, so is the massive push to get us all to download this coronavirus tracking app. It's all about conditioning the public to accept digital 'round the clock monitoring. Truly sinister stuff.

Sooo disappointed that ScoMo and his peers seem so zealously in support of this. I thought they would reject such Orwellian tactics. And officials like CMO Brendan Murphy have revealed what they're really about. They seem less concerned with public health than public control.

To these people I say: Stop lying to us. We can see right through you ... Oh, and shove your app up your gap!
If you appreciate these posts, please consider supporting me via Ko-fi. Aussies, know your rights!
Posted by MattHaydenAU at 11:59 AM