Malcolm Turnbull wants our compassion and understanding. Why?

We keep hearing that big Spygate indictments are on the way. While there have been similar rumours before and nothing eventuated they just have to happen sooner or later. And I can't see this issue being held over until after the November election. Surely POTUS would wanna sort this all out before then. Officially detailing crimes by big name enemies in league with the Democrats would yugely increase his electoral chances apart from anything else.

We've all heard of Alexander Downer's alleged role in this long-running Deep State coup attempt. He is of course vehemently protesting his innocence, and the mainstream media continue to portray George Papadopoulos as a shallow, big-noting blowhard who's prolly telling porkies. But his book about the whole affair is comprehensive and compelling from what I've heard.

If Lexie was part of this, then was Malcolm Turnbull too? He was PM at the time, after all.

You can't judge a book by its cover, as we all know. That aphorism would apply to titles as well ... Still, I couldn't help noticing that A Bigger Picture does seem reminiscent of James Comey's recent offering A Higher Loyalty. While he may not be flat out signalling allegiance with this title, he and Comey do seem to be on the same wavelength with regards to Trump. And they both sympathize more with the globalist worldview than the nationalist one.

The launch of his book and subsequent publicity for it is very interdasting also. I mean, we're currently in the grip of this coronavirus insanity. The MSM are completely obsessed with it. Tryna get publicity for an autobiographical book would be more difficult than usual even if you're as well known as Malcolm Turnbull himself. And even though he is completely self-obsessed, he would surely be aware that potential readers would find it difficult to focus on his book launch in the current situation.

Obviously he would love to have heaps of attention, and big sales. It's a massive tome, so he's clearly been working on it for a while. You'd think that he would hold off for a few weeks until all this viral panic (and 24/7 coverage in the MSM) had died down, wouldn't you?

So, why is he so keen to get this out there now? 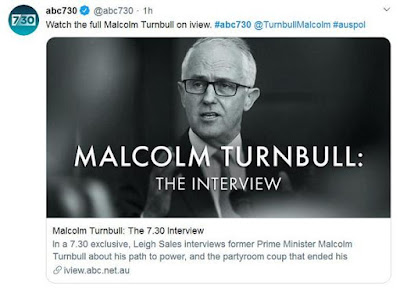 Also, why did their ABC let Malcolm Turnbull shamelessly flog A Bigger Picture on The 7.30 Report? They also talked up this episode zif it was some kinda earth-shattering program that was simply not to be missed.

Leigh Sales gave him softball questions and didn't hold him to account at all. She was more like an entertainment reporter talking to some movie star about his latest flick, including questions about intimate issues like relationships as they often do.

Sales focused on personal revelations contained in the book such as his battle with depression.

Speaking of when he lost the Liberal Party leadership for the first time in 2009, Turnbull told Sales it was a dangerous time for his mental health.

“I started to sink into a very, very deep depression. It was very deep and very dangerous,” he said.

“I’d never given much thought to mental health before. I’d been aware that, you know, people have mental health issues, but I’d never really thought about it a lot. And I felt myself – I felt these thoughts of death, of  self-destruction, coming into my mind unbidden and unwanted. And I couldn’t get them out of my mind and I got sicker and sicker and sicker. It was a terrible time.”

He also opened up about his very difficult childhood.

When Sales asked if he’d thought of his father on the day he was elected Liberal Party leader, he said, “It’s hard to talk about him without shedding a tear”.

“He was such an incredible man, my father. What he did for me was provide absolutely unconditional love.”

Turnbull went on to describe what it was like being raised by a single father after his mother left his family when he was young.

There was also a puff piece in a recent issue of The Weekend Australian by a long time friend of Turnbull's called Bruce McWilliam. 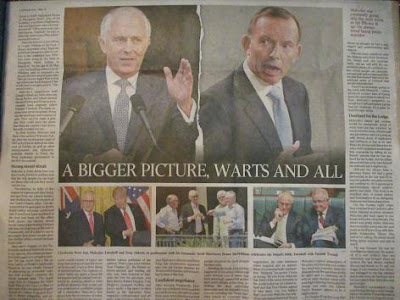 It went on for ages and painted him as an all-round great guy. Needless to say, it was pretty nauseating.

Malcolm Turnbull is always bitching about Rupert Murdoch and of course this is one of his papers. So you've gotta wonder why the publication would run such a piece. Maybe doing so was partly to deflect from Turnbull's own criticism; to prove that they were not as biased against him as he claims?

I think that's part of it. But IMO the main reason is that News Ltd genuinely wanted to help make him a sympathetic figure. All Australian MSM are controlled by the Deep Stare and globalist Cabal. This includes The Australian. The enemy of my enemy is my friend, as the saying goes.

This reminds me of sympathetic coverage given to Alexander Downer when his alleged involvement in Spygate started to get a lot of exposure.

At around this time, Lexie even appeared on The Drum. Given that this show regularly features panels chockas with batshit lefties (it's prolly even worse than Q and A in this regard!) this was very weird -- and telling.

Also telling is the fact that so many high profile Liberals are pushing to have Turnbull punted from the party. It's like a concerted campaign. They're all echoing the line that the book was the last straw. But I think that's just the cover story and they're packin' death about what's gonna be revealed about what the Australian Government got up to when he was PM. They might be practising some extreme, pre-emptive social distancing from Turnbull because they don't wanna catch his Spygate virus.

So, the picture that emerges is that Turnbull is deeply worried about what's coming down the track. And he's desperate to have Aussies seeing him in the most sympathetic light possible if and when this occurs.

The MSM generally are also fretting about this fallout in the sense that readers will be saying: "WTF? Our government was cooperating with treasonous Democrats and Deep Staters? Why didn't you look into this and report on it when it was happening back then?" That's why they've been running this laughable press freedom campaign in recent months.
If you appreciate these posts, please consider supporting me via Ko-fi. Aussies, know your rights!

Posted by MattHaydenAU at 1:07 PM