We all know that the globalist Cabal and the Deep State are determined to destroy Christianity. Still, it's pretty amazing to watch the lengths they'll go to achieve this end -- not to mention how how sly and subtle their methods often are. They've been very busy in this regard over Easter, aggressively exploiting this insane lockdown over coronavirus.

The whole situation is quite bizarre. On the surface it appears that governments are driving it. But that's actually not the case at all. They are responding to the plandemic, bowing to pressure from the WHO and similar globalist organizations and institutions -- the MSM among them.

That being the case, it looks like Trump has decided to use the lockdown to take out the trash in the shadows. I'm pretty sure that here in Australia the PM Scott Morrison is fully on board with this approach. So, on one level the recent texts and social media updates we've been getting seem to concur with "the plan" that those who follow Qanon and know about The Storm are all supposed to "trust". 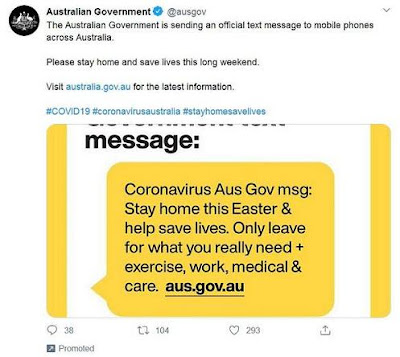 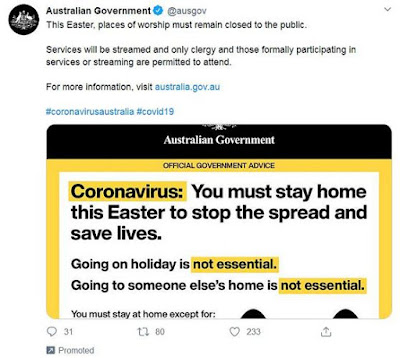 These are being sent out as part of the globalist psyop to terrify the normies as much as possible, and break them psychologically. And the white hats are letting this happen. It suits them because they can carry out dangerous military operations while everyone is safe at home.

With aggressive social distancing laws in place, there are no crowds gathering in public places anywhere in the country. So, there's a real dearth of juicy targets for false flag terror attacks. And we know how much the Deep State control freaks love having their useful idiots commit those, particularly against "Easter worshippers".

A recent event in rural NSW seems to support this theory. Over the weekend there were reports of a loud explosion in Thirlmere, in rural NSW. It was reported on the NSW Police News site, as well as in a Facebook group for people in the area.

It was clearly being treated as a possible terrorist attack. Curious to know more, I went to the site in question and couldn't find the specific report. The Facebook group update about it has also now been removed, apparently.

Of course it may not have been a dinkum terror attack. There could well be another explanation. But something pretty violent did occur and it looks like news of it was quickly buried. All very suss.

So it's really hard to know what's going on here. I suppose you could call this "the fog of (information) war".

There's always a cultural war going on too. In this, Islam has been used as a battering ram against Western civilization. This is why we have so many asinine Muslims being aggressively promoted by their ABC and other globalist MSM outlets.

Osman Faruqi, son of Mehreen, is one of them.

I though this tweet said so much about the toxic idiocy of political correctness. I tweeted that if a white person who wasn't one of the anointed had said something like this they'd be accused of Islamophobia, racism, hate speech, etc.

I thought that Osman was just being his usual airhead self. I didn't think that Covid-19 getting "the whole world going Muslim" could actually be part of some grand plan. However a tweep replied with the inference that maybe there was something intentional in this after all.

I think this was a good observation. I'm not saying that the globalist NWO is being masterminded by Muslims. Rather, the highly autocratic religion is being used as a kind of "Trojan Horse" to soften up the normies for something far more totalitarian down the track. It's a kind of pre-emptive programming.

Remember how after the Christchurch terror attack Jacinda "The Fake of Empathy" Ardern wore a veil, and had the Muslim prayers blasted out across the city? Maybe there's something similar going on here.

Osman himself seems to imply that this might be the case. Who am I to dismiss that idea? That in itself would be hateful and bigoted, wouldn't it?

But back to the MSM and their shameful part in the psyop. Disappointingly, The Daily Telegraph has been even more aggressive than The Guardian in its fear-mongering over coronavirus. In amongst all the shots of punters wearing masks, slebs in isolation and lab attendants in hazmat suits they've been publishing a lot of public notices like this one. 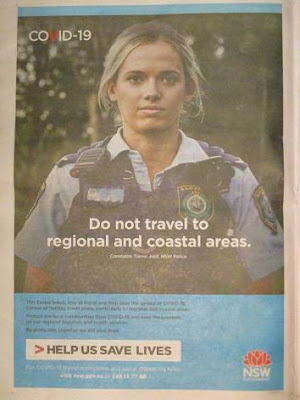 You can't see the actual text in the photo but it says that it's important to stay in the cities to relieve pressure on regional hospitals. Given the city hospitals themselves aren't overburdened with 'rona-stricken patients this reason is quite obviously complete and utter bollocks.

So why are they so determined to stop people going to these areas? Well, it could be because of their awareness of the terror threat (as explained above). It could also be part of the wider cultural campaign against Christianity. By saying you can't even go away to the country for a coupla days like you usually do, they are helping make it an Easter to remember -- and not in a good way.

Then there are all the virus-themed stories about our brave nurses and doctors. 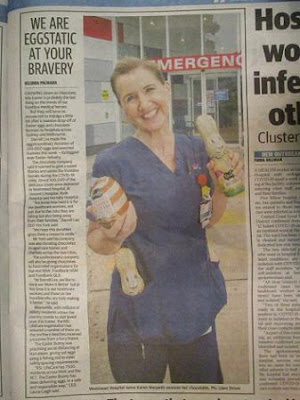 Of course they deserve the kudos. And on one level this is a "feelgood" story.

But the whole piece is still seen through the prism of the impending "coronapocalypse". And notice how the photo clearly shows the word "emergency" in the background. That's surely not something you like to think about when unwrapping the kinda scrumptious chockie eggs the nurse is holding, now is it?

Here's another example of this double-edged imagery. 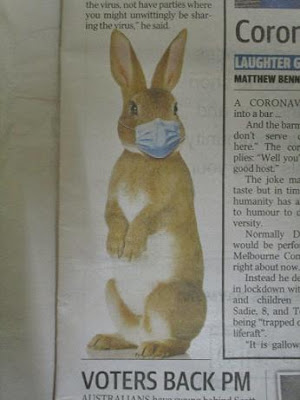 That's under an ostensibly cheerful little item about how the whippersnappers needn't worry because da cute wittle wabbits are deemed an essential service and are therefore "eggs-empt" from social distancing laws. Yet they've still whopped a mask on the bunny's mug ... WTF?

They're literally defacing an Easter icon -- one that kids in particular find very appealing. And it's not by accident. 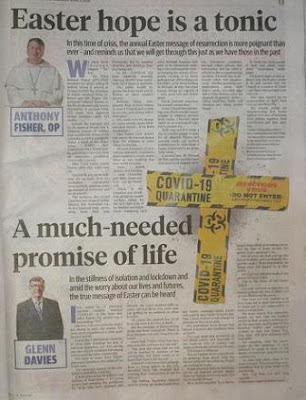 On one level they were hopeful, calming and pro-Christian. But they were also extremely dark, with constant reference to these trying times so marred by the threat of death all around.

I'm sure both of these pious dudes weren't intentionally taking part in this sinister psyop, but they were still cranking out the fear-porn nonetheless.

And check out the crucifix! 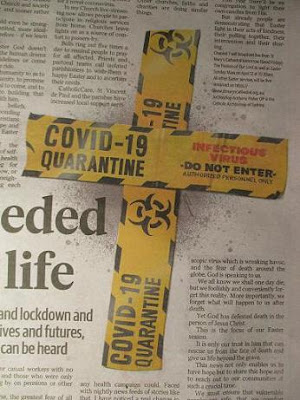 FFS, talk about ringing the leper's bell. If that's not a desperate attempt to cross a cross I dunno what is.

See what the fake news peddling arseholes are doing? They're invoking Christian imagery and associating it with as much negative emotion as possible. This kind of symbolic subversion is one of their favourite methods of mind war. They did it heaps during the recent bushfire disaster -- which, like COVID-19, was another massive Cabal-engineered false flag terror attack, natch.

Thoughts on those tactics below.
If you appreciate these posts, please consider supporting me via Ko-fi. Aussies, know your rights!

Posted by MattHaydenAU at 4:35 PM