Our mainstream media are leading us to the Gates of Hell!

As each day passes during this "CoronApocalypse" that isn't, the awful truth of what's actually driving it becomes increasingly clear. This insane global lockdown is not about protecting people's health. It's about installing globalist top-down control.

Basically the public health systems in each country are just following orders from the WHO. This is an utterly corrupt organization that does the bidding of Big Pharma and China. The globalist mainstream media are zealously playing their role in this sinister psyop by pushing the obviously bogus narrative that this disease is far worse than it actually is and that all these extreme measures are absolutely necessary.

They also say that vaccination is the only option, and that cures are unreliable or dangerous. This is to pave the way for an utterly demented control system masterminded by Bill Gates. He and his fellow control freaks will be in heaven when it's complete. But it will be hell on Earth for everyone else, that's for sure!

FFS, this evil geek is just flat out saying that he wants mandatory vaccination for the entire world. And while this is being done, everyone has to receive one of his creepy digital tattoos so they can be tracked. Without this they won't be allowed to function in wider society. For years conspiracy theorists like David Icke have been warning us about programs like this as part of a diabolical plan to install a New World Order. And now the whole thing is being laid out before us.

For years many in the mainstream media have said of him: "What a nutter! As if such a conspiracy could possibly exist? 'Barcoding' the population, hooking them up to AI? Insane delusion." And now many of these same people are going: "This global vaccination project is really important. Sounds quite reasonable, actually. Bill Gates et al are only doing it for our own good, after all."

If you can't see that the public health system in Australia is ultimately controlled by the globalist WHO and is desperately tryna push us toward mandatory vaccination (and that the MSM are aiding and abetting them zealously in this) consider these examples.

Firstly, Australia's Deputy Chief Medical Officer Paul Kelly warned that up to 150 000 Aussies could die from the virus. So, working hard to terrify us for sure. Then he said that it's illegal to talk about cures for the disease! 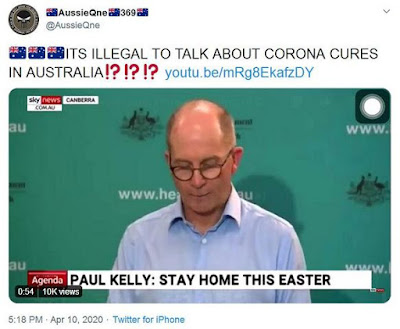 As I wrote recently, this is the big battle. The WHO muppets are absolutely desperate to keep the normies in the dark about cures. This is becoming more and more difficult for them as the days wear on.

Not only are there heaps of doctors in America and elsewhere saying they've had fantastic results with Hydroxychloroquine and other treatments but BoJo himself has clearly been cured of coronavirus. He hasn't divulged what treatment he took AFAIK, but he must have been given something. They didn't just wrap him up in nice warm blankies, tell him to keep a stiff upper lip and think of England, now did they?

He was given a cure of some sort. Doesn't really matter what this consisted of. Fact that it happened puts a massive hole in the vaccination push, which includes the outrageous prediction from NSW public health big wig Dr Kerry Chant recently reported below. 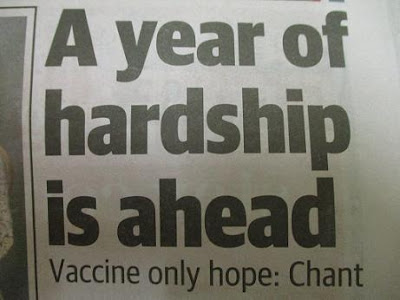 And if you had any doubt that the WHO is ultimately calling the shots in this titanic psyop, and that the Australian Govt are just doing as they're told, search for info about the "pandemic" on Twitter. You'll get a notice like this.

Of course far Left outlets are the most shameless in their promotion of the Bill Gates agenda. But News Limited publications are also flogging it hard.

As we all know, stars and slebs are just mind-controlled assets. If they don't obediently regurgitate the preferred narrative when required they get punished, like Isabel Lucas was here by the Daily Telegraph. 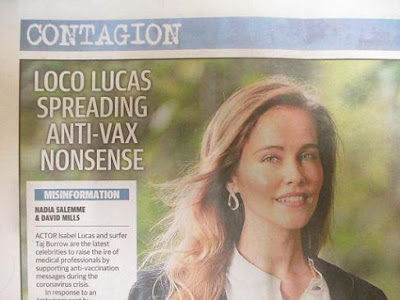 But back to Australia's fake news HQ, their ABC: Even after the curve has been flattening for a while, shameless fearporn peddlers like Dr Norman Swan encourage more testing. 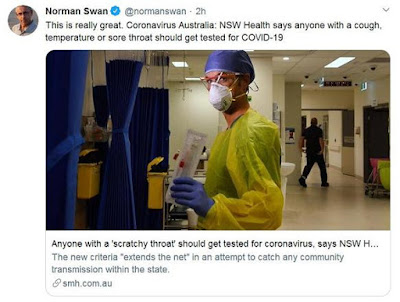 More tests mean more (often false) positives. Those scary figures mean greater leverage for those pushing for vaccination. And this guy is really hot for it, and on a grand scale. This is one of his recent retweets, BTW. 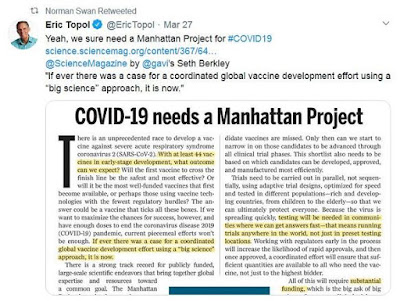 Why is he going all in with this angle? He must know about the cures. He's not being objective at all.

As a well known medical influencer, shouldn't he be tryna calm the population, not scare the crap out of them? Shouldn't he also be making them aware of various options so they can make up their own mind about them?

Late last month this dude was saying that we would have maybe 80 000 cases very soon. Even now we have several thousand. And even that number could well be inflated because of false positives.

How can we be sure about the accuracy of the tests? How certain can the doctors be that COVID-19 is actually causing deaths. Do they do autopsies? Where's the proof? If you shut down the entire nation's economy for weeks on end you'd wanna have that sort of data to back up your decision, wouldn't you?

But no MSM "journos" at all are asking about this. They're just reporting these hilariously OTT predictions by so-called medical "experts", many of which have already being shown to be complete bollocks. Do they highlight these massive beclownings and use them to calm the population? No way. That's because they, like all the establishment quacks here, are controlled by globalist forces.

But even with all the brazen attempts to keep the fear going and exaggerate the numbers, it seems we're already well past peak infection rate. And we've had 71 deaths from it apparently. Again, how reliable is that figure?

I keep hearing reports like "A 90 year old man died after contracting coronavirus". These are the kinds of cases included in the stats as having died from the disease. But isn't it far likelier that they die with it, if they even had it at all?

Sooo obvious what's going on here. This plandemic is being aggressively exploited to push for a mandatory global vaccination program. Ultimately its proponents -- led by the evil geek himself -- want everyone injected with a vaccine (including a digital tattoo).

OMFG how terrifying! But to them it's not totalitarian all. Oh no! It all has to be done for our own good. There's simply no other way ...

To them it's a way of ushering in a utopian new age, like that of Aquarius ... Sing along now, you know you want to!

When the Loon is in the bio lab

And Lucifer maligns with SARS

The Beast will rule the planet

And clowns will steer the "stars"

This is the dawning of the age of Bill Gates Virus

Bill Gates Virus
If you appreciate these posts, please consider supporting me via Ko-fi. Aussies, know your rights!