The light at the end of the ... rabbit hole?

Normally at this time of year most of the Western world is anticipating Easter, with millions looking forward to gorging on chockie eggs as TV, radio and print are full of images of cute and cuddly bunny rabbits. Not now, but! Ghoulish diseased bats are our collective spirit animal whether we like it or not.

Billions are pretty much in coronavirus lockdown, and most are going: WTAF is going on? The MSM certainly won't enlighten us. It's blindingly obvious to anyone who isn't a dribbling idiot that most "journalists" are simply robodolts peddling utter bollocks for their cynical employers, who are ultimately all globalists who for decades have been colluding with each other and the Deep State to keep us all inside a deep, dark tunnel of narrative disinformation and distraction.

Nationalist Trump poses an existential threat to these corrupt and twisted elites. That's why they use their TV and radio shows and publications to flat out lie about him constantly and distort what he says to hide the truth. So he's had to find various ways to go around them and connect with the normies on his own terms. Qanon has been the main channel through which he's done this.

He also does it almost every time he tweets and speaks. Pretty much everything he says has a double meaning. Take some recent pronouncements about the "war" against coronavirus. It looks increasingly likely that the "invisible enemy" America and "the world" are fighting now is not that flu-like illness that ultimately came from a Wuhan wet market, but the far more putrid Swamp whose despicable denizens launched the sick viral psyop itself, and who are funded by evil industries such as drug and human trafficking.

I fully accept the possibility that I've succumbed to a mind-altering drug of "hopium" myself but I think it's quite possible that Trump and the US Armed Forces have been waging a vast hidden war against these evil scumbags, with most operations to be completed by Easter or not long after. And he will communicate this to us by lifting the lockdown around this time. If true, it'll be the bigliest "rabbit out of the hat" trick ever attempted! 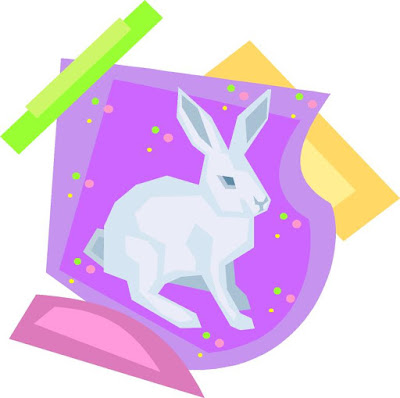 In this context, his statement that "there may be a light at the end of the tunnel" after the radical action against the China virus takes on new meaning. He has repeated this several times, including on Twitter. He clearly wants us to focus on the specific wording. Could he have been referring to underground battles between white and black hats?

There have been an unusually high number of earthquakes recorded lately in the USA also. Several of them seem to be located in areas reputed to have DUMBS (deep underground military bases). Are these being destroyed by explosives after finally being emptied?

Yeah, I know. I am speculating up a storm! But joining the dots that are visible is all you can do when the MSM tells lies all the time.

In any case, the political battles waged against Trump have been so extreme and desperate and the hatred of him from the Mockingbird Media so relentlessly insane I would not be surprised if this were accurate.

He also said Americans should be preparing for a lot of pain in coming weeks, adding that there would be "a lot of death unfortunately. But a lot less death than if this wasn't done". What does he mean by "this"? While the dreaded 'rona has racked up quite a body count so far (well, at least if the MSM are to be believed) the fatality numbers are still waaay below those of other common diseases. So why this anticipated uptick?

Maybe he's referring instead to the deaths of his enemies either as a result of secret military tribunals (he said the nation is going through a great "trial", remember) or by them taking their own lives by hanging themselves on doorknobs. His exhortation to use scarves might have been significant here.

Then there's this specific quote: "When this hidden scourge is defeated, I think we're going to go up very rapidly, our economy." What did he mean by this phrase, which he has used repeatedly? China virus is certainly a scourge but it sure as hell isn't hidden. You read and hear of nothing else these days! But Google "hidden scourge" and look at the top result.

For those of you who think I've now become a hopeless conspiratard from my two plus years of guzzling the Qanon Kool-Aid here are some more data points for you to consider.

Take this excellent thread from co-founder of Wikipedia Larry Sanger, a sharp and sober thinker if ever there was one. Q often use the phrase "dark to light". This dovetails neatly with Trump's "light at the end of the tunnel" reference. Again, I say it's prolly a long bow but not impossible. 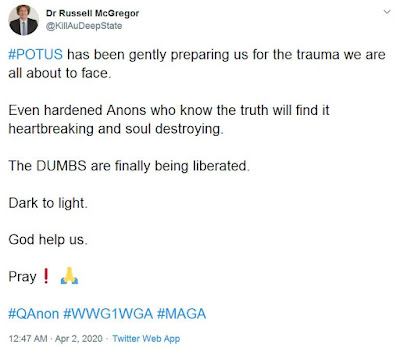 Then there's this. Playpens would be a crucial item if you were rescuing children, surely. 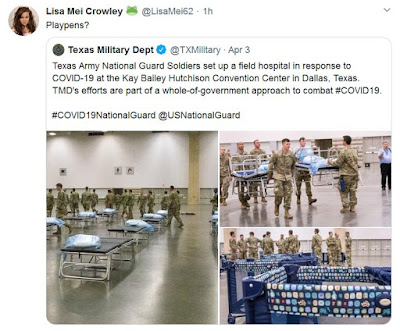 There's also a lot of social media chatter like this, definitely growing in volume. 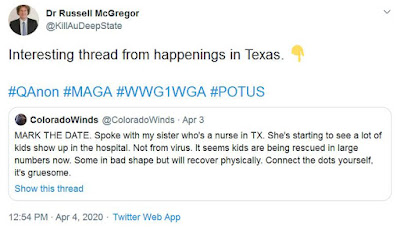 Then there's all this money being set aside specifically to help victims of human trafficking. 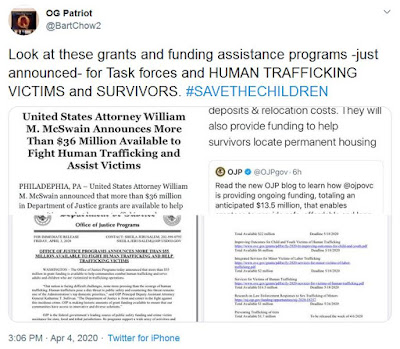 So it looks quite plausible that that the US Military has been using the cover provided by the COVID-19 to hit human trafficking networks hard, and save many children.

With everyone safe at home or practising social distancing, the potential damage inflicted by Deep State engineered false flag terror attacks has been yugely reduced. So it makes sense that the white hats would use this specific time period to carry out the biggest, most crucial and dangerous military actions in The Storm.

Then there's this major offensive against another evil global industry. And there can be no denying that this is actually taking place. 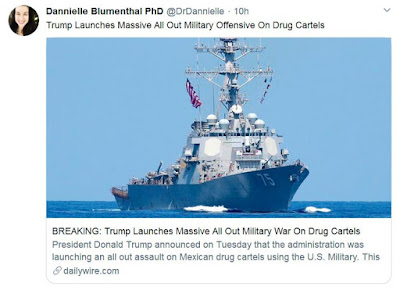 So, they're taking down drug traffickers along the Caribbean and Mexico. Interestingly these are also major human trafficking routes. Coincidentally (er, or maybe not) these sea lanes are chockas with idyllic islands, many of them owned by globalist squillionaires like Richard Branson and -- you guessed it -- Jeffrey Epstein. (More on the Clintons BTW, and a must-read IMHO.)

Speaking of rabbit holes, there's one that is particularly deep and dark -- and in more ways than one.

Martin is referring to what Barry's brother is enquiring about below. Is it real, he asks?

Well, yes it is. Even Wikipedia says so. 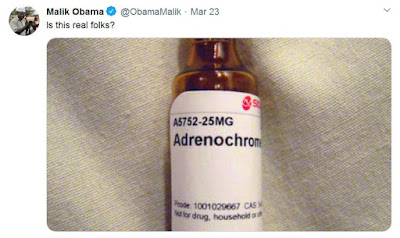 It's reputed to induce a high like no other. And while it can be manufactured in a lab there have long been reports, many from credible sources, that it is extracted from the pineal glands of terrified children. And this is the most highly sought after and expensive kind, used for ages by super-rich ghouls the world over.

And there is a bizarre link to Wuhan. 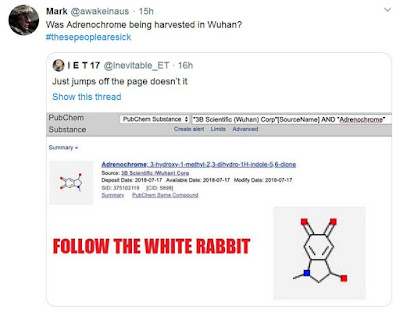 Some are theorizing that this factory had long been selling the human-created variety, and that the white hats infected a batch with the China virus. That's why so many slebs are coming down with it.

I'm not totally convinced. But it is intriguing as. And again, given how bat soup insane the world is right now, anything's possible, innit?

Anyhoo, check out this thread to see just how deep the rabbit hole might go. It won't just bake your noodle -- it'll fry it to a crisp!

It's beyond dispute that Hollywood is full of sick, twisted perverts with mountains of moolah. They also love their symbolism.

That's why I think the above tweet may have been alluding to impending developments related to the whole issue of elite pedophilia. Pammy surely knows a helluva lot about entertainment industry fat cats from her own time as a world famous sex symbol. She's also very close to Julian Assange, who is clearly loathed by the "occult elite" because of his extensive knowledge of their secrets.

Then there's the fact that Lewis Carrol himself was a known rock spider. Interesting that the characters and imagery in his famous book have been such a source of inspiration for movie and music creators over the years.

Take the film clip of Tom Petty's "Don't Come Around Here No More". Chockas with Masonic black and white, it is set in a fantastic "Wonderland" like universe. It ends with Petty himself eating the Alice character zif she were a cake. Sick or what! 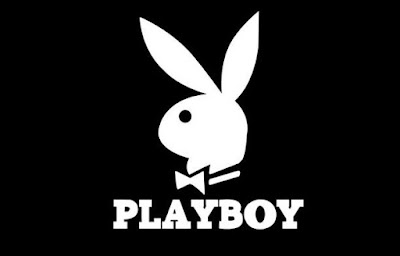 Still on symbols: Of course we all know this one.

While feminist frightbats might find it triggering because of the attitude towards women the iconic men's mag encouraged, most find it pretty benign. 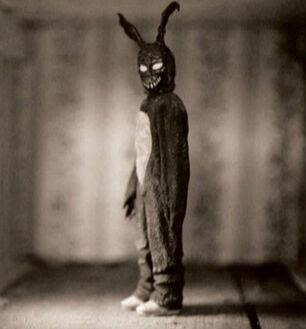 The more you learn about this whole world of globalist elites, celebrities and their weird rabbit symbolism, the more nightmarish it all becomes.

The above image is from the cult movie Donnie Darko, BTW. Q himself keeps saying "those who know cannot sleep". Maybe this shockingly creepy character was meant to represent something entirely unrelated but if it was some kind of oblique allusion to the hidden scourge then I wouldn't be surprised. The film does have a character who is very respectable on the surface, but turns out to be hoarding child pornography, after all.

I admit that I've indulged in some pretty extreme dot joining in this post. But we really are in the midst of so much TDS-caused cray-cray at the moment, I can't help feeling that we are on the edge of a paradigm shift that is utterly epic and yugely cathartic.

The revelation that there has long been a massive, literally subterranean industry producing a drug from the most evil and horrific process imaginable would explain so much. Even if this is not the case we are in for a big time reality reboot without a doubt. POTUS really has shattered the spell that the globalist Cabal and Deep State had us under for so many years. I knew this months ago, hence the video below.

But I had absolutely NFI things were as insanely twisted as they now appear! If this rumoured rabbit hole goes from dark to light in the way that seems increasingly likely, the world is in for one helluva spiritual shock. It will just never be the same again and many millions of people will simply not be able to cope.
If you appreciate these posts, please consider supporting me via Ko-fi. Aussies, know your rights!

Posted by MattHaydenAU at 1:28 PM