The mask is off for loser lefties

This crazy mask-mania has not been as pronounced in Australia as it has in America. Still, there has been a sustained push to wear them from many in the so-called "public health" system here. They are definitely exaggerating the coronavirus threat, a fave tactic of totalitarian control freaks. So, many of the more nervous Nellies among us are donning them and have been for a while -- though there do seem to be fewer with each passing day, which is good to know.

Pretty obvious that masks give you next to no protection from the dreaded 'rona. And wearing them, particularly for long periods, is almost certainly a net negative because you're breathing in your own CO2, among other things.

Today's mask-wearers are clearly very trusting of official "authority". So I suspect that they also swallowed the brazen bollocks about "catastrophic climate change". Sad that so many who falsely believe we're poisoning the global atmosphere with carbon dioxide are doing this on a kinda micro-scale to their own fricken heads!

It's not just full-on lefties who wear masks, of course. But they are the ones most likely to make a song and dance about the fact that they have done so, and why.

It's ironic because by covering their faces they actually reveal heaps about their own characters. A recent Twitter thread from California Democrat Katie Hill offers insights in this regard.

Check out the characteristic bolshie aggro. Lefties are miserable, rage-filled people. They are always projecting and this is a perfect example of that.

They are often narcissists, too. Even if they don't suffer from the individual personality disorder they display its characteristics collectively.

The above tweet illustrates this. Ms Hill is so caught up in a false narrative about what a good, kind, compassionate person she is that she sees other people's refusal to wear masks as an attack on her.

Crikey! It's always all about them, innit?

Narcissists are known for their ability to "turn on a dime". From a state of paranoid rage she seamlessly pivots to "no judgement" against those who are walking outside, practising social distancing.

M'kay ... But what if you and her were in a borderline situation like waiting in line for a bus? Would your uncovered face set her off then? Who knows ...

Think of all the other delusions swirling around in her TDS-afflicted head to do with feminism, immigration, etc. And imagine having to be around someone that volatile for even a short time. It would be stressful as.

This is the big lie about dealing with the COVID-19 threat that PC lefties constantly tell you and themselves. They say you should wear a mask because that's being considerate of others.

That's why she's doing it, of course. It's not about controlling people. Oh no, how could you possibly think that? It's all about being kind and caring and sharing!

But wait on. Why should I wear a mask to protect others if they are wearing them to protect themselves? That's their choice, innit? If they wanna do that, fine.

I'll look after my health, and take risks I deem acceptable. It's up to others to do the same, if they so choose. (This applies to vaccinations as well. The idea that absolutely everyone has to get them is totalitarian.)

I could support her position if coronavirus killed everyone it infected -- and masks were demonstrably effective against it. But this is not the case at all. The vast majority of those exposed shrug it off or don't even get sick! 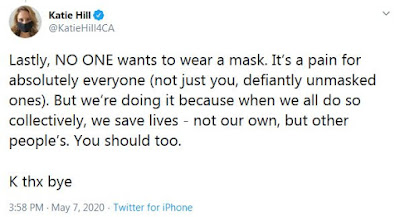 There's the delusion again. We're doing this for the common good. And we're "saving lives". What an absolute crock. Sooo obvious she's doing it as an excuse to be a bossy asshole (to use her terminology).

Lefties are in a constant state of simmering resentment -- and therefore miserable -- anyway, so adding a mask is not gonna be a burden for them like it is for sane, generally contented folk.

By doing something that looks like self-sacrifice for the greater good they can make others feel indebted to them somehow. They can then guilt-trip them into following their example and "getting with the program".

But that program is always one that the Left controls. And control is what it's all about! In the end, nothing else matters to them.

Sad.
Thanks for reading, and if you've enjoyed this piece, please consider supporting me via Ko-fi. Aussies, know your rights!
Posted by MattHaydenAU at 11:44 AM