Rowan Dean is a witty and funny writer. He can certainly communicate ideas in a pithy way. He did this recently on Outsiders when he described the similarities between COVID-19 hysteria and climate change alarmism. He said they are both "built on a fraudulent threat of doom".

If you have your thinking cap on then an observation like this is completely reasonable. Consider all the dud predictions the warmists have made over the years. Also, look at the actual numbers of people infected and dying from coronavirus -- particularly in Australia. While it's a real problem it's certainly not the end of the world. Yet there has been an insane over-reaction to it from the Government and pretty much the entire MSM.

But being the nanny state-loving bedwetters they are, the PC Left completely lost it over Dean's comments. He even ended up trending on Twitter.

Many members of the perpetually outraged #Auspol trollective fired off countless nasty, outraged tweets. Of course they didn't deal with the substance of his observation, which was bang on the money.

Being incapable of rational argument, they just did what they always do: launch ad hominem attacks. He was a big bad meanie, they railed, and he should be taken off the air!

This hate tweet was typical of the trollective's total incoherence. And it's pretty funny that Nina invokes the image of a nude loon shrieking about the End Times. It's actually she and her fellow travellers who are the crazy catastropharians. Rowan Dean was just pointing this out. 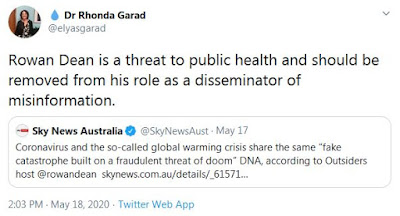 Another silly, censorious tweet, so typical of the smug, bullying Left. Dean is no threat to public health. He's just a broadcaster who can't change people's behaviour.

Australian Government "public health" officials, OTOH, can actually do this. Their stupid advice has led to a wrecked economy along with massive knock-on effects such as more domestic violence and suicides. If anyone should be removed as a "threat to public health" it's them!

Emmo thought he'd lob for a bit of meaningless virtue signalling. Pretty funny that after tweeting this he was abused by many on his side of politics for having a Foxtel subscription in the first place!

In his defence he said he only had it for the sport. (Yeah sure, Emmo. That's like claiming to read Penthouse "for the articles"!)

And tryna link Sky News to neo-Nazism was pretty piss-weak. Apart from anything else their ABC also had Blair Cottrell on one of their shows a few years back.

Not only does Emmo obviously keep watching the national broadcaster, he's happy to appear on it himself, making daft observations like this. 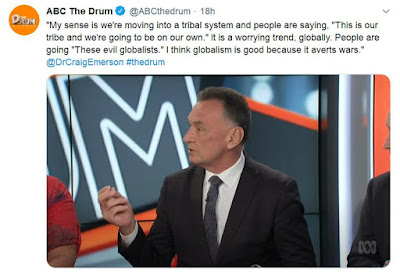 Gawd. He reckons the rise of nationalism (eg, Brexit) is a worrying trend globally?

He seems to be implying that if a country is tryna rediscover economic and cultural independence it's being recalcitrant somehow. It's disobeying some central organizing force and he doesn't like this at all.

"Globalism is good because it averts wars"? WTF? If anything, it leads to the opposite ...

Hitler was a globalist, wasn't he? He wanted to control the world top-down and centrally. And he tried to achieve that goal through overt military means.

Today's globalists are just as power-hungry as he was. But they operate in a covert way. Among other things, they're using mass mind-control via global warmism and fear-mongering over pandemics  which -- as Rowan Dean observed -- are both built on a fraudulent threat of doom.

More thoughts on this subject below.
Thanks for reading, and if you've enjoyed this piece, please consider supporting me via Ko-fi. Aussies, know your rights!

Posted by MattHaydenAU at 1:58 PM