This insane coronavirus lockdown continues in Australia, along with other countries. There are many reasons for this, of course. One of the main ones is that it's being used by the Deep State and Democrats to dominate the news cycle and keep the normies distracted from developments such as the official exoneration of General Flynn. If and when Barr and Durham drop the hammer on the scumbags masterminding the treasonous plot to frame him as part of their effort to stop Donald Trump reaching the Whitehouse then the MSM will have no choice but to report on this and the world will finally become aware of the whole Spygate saga.

One of its many jaw-dropping features is Australia's alleged involvement in this long running coup attempt. So as this massive story explodes into public consciousness Alexander Downer is sure to receive attention in the local mainstream media -- and much more than he did last year. That's why I thought this recent tweet of his was very interdasting.

Sure you've seen the stocking photo he was referring to. But if you haven't, here it is. Notice how he's got his right foot forward. 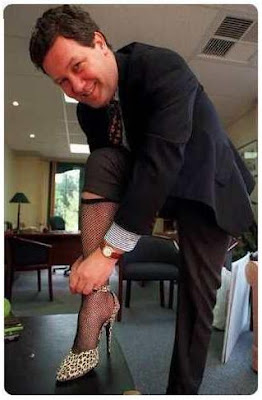 Downer is clearly drawing attention to the fact that he's a (centre) right-winger. He reiterates this in a reply to that very tweet. 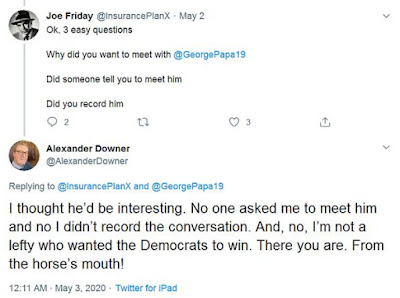 He's invoking the well established idea that people generally -- and politicians in particular -- are primarily motivated by ideological beliefs. He is well known as a Tory blue blood who was born with a silver spoon in his mouth. And the Clintons are of course liberal lefties. So why on Earth would he, a rightie, become a spy in a diabolical attempt by lefties to sabotage Trump, who has proven himself to be a very right-wing POTUS?

It just doesn't make any sense. If you do believe such nonsense you've obviously fallen for a bonkers conspiracy theory, haven't you! 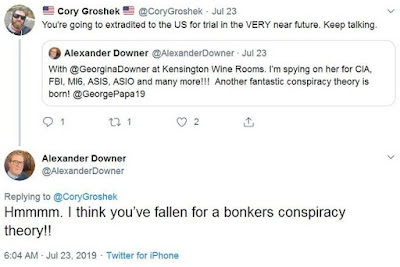 Looks to me like he's outlining a clear and plausible narrative that he'll rely on as the issue of his alleged involvement in Spygate gets wide exposure in the near future. IMO it's a kind of pre-emptive damage control not unlike what Malcolm Turnbull engaged in with the recent launch of his book.

It's crucial for Alexander Downer to reaffirm his established image as an elder statesman and classic Aussie conservative. Even though most local journos hate his kind they are still completely controlled by globalist forces and are therefore waaay more antagonistic to the likes of Trump.

So they are sure to help him promote this narrative with little or no resistance. After all, they did this when the issue of his "boozy chance meeting" with George Papadopoulos first became a story last year. And I just heard him being interviewed on RN about his views on China. Of course he was highly critical of the communist regime in power, confirming his clear ideological credentials.

But one thing that's becoming increasingly obvious in recent years is that the whole concept of left versus right is far less relevant than it was in the past. It's much more about nationalism and globalism these days. If you look at things this way then George Papadopolous's claims about Alexander Downer become easier to believe.

Posted by MattHaydenAU at 1:13 PM