Saw this toon below in the May 6th edition of the Sydney Morning Herald. It's by ultra-PC leftie Cathy Wilcox. If you find the speech bubble unreadable it basically implies that the claim that coronavirus was a Chinese bioterror weapon is the same as the WMD lie. And you can be sure that upon seeing it countless inner west woke folk let out a combo sneer and chuckle (snuckle?) between soy-sips, many muttering that she totes “nailed it” while stroking their magenta goatees.

Of course, those eeevil AmeriKKKans would eagerly use this totally naturally occurring coronavirus that leaped from bats to humans by way of a Wuhan wet market as a pretext for waging all out war on a nuclear armed nation of over a billion people. The capitalist imperialist racists would wanna do that anyway but they're even more crazily bellicose under that Bad Orange Man! 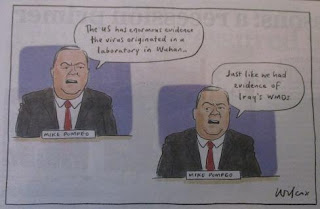 But any sane adult with a sense of humour would've found it lame and unfunny as well as tragically retarded in its political subtext. FFS, Trump's presidency is diametrically opposed Dubya's. The people who pushed the WMD lie so that they could wage war on Iraq and Afghanistan were the Deep State denizens and neocons. Trump has been purging his administration of these ghoulish scumbags. That's how he's managed to achieve so much when it comes to the middle east and North Korea, among other things. While he's definitely been waging a trade war with China, he sure as hell doesn't want a hot war.

There's something else that the toon reveals indirectly. That's the irony of lefties mocking “conspiracy theorists” like David Icke. Wilcox has Pompeo making what she clearly believes is an outrageous accusation of conspiracy by the Chinese Govt: “The US has enormous evidence the virus originated in a laboratory in Wuhan.” After all, the only way you could do such a thing would be to conspire -- firstly to create the bioweapon, then to cover up the fact that this was done.

In the next speech bubble, she invokes the idea of WMDs. But remember that whole narrative about the creation of bogus grounds for the “Coalition of the Willing” to launch their catastrophic invasion -- “Bush, Blair and Howard lied and people died" -- was a conspiracy theory itself, and one that was ultimately proved to be correct.

Just goes to show that these can be valid explanations, no matter how far-fetched they may seem to be at first.

They can also be completely and utterly wrong, such as the "Russian Collusion Delusion” narrative about Trump being Putin's puppet that pretty much the entire mainstream media promoted constantly for three years. While that has been completely and utterly debunked every which way including by Robert Mueller himself, many high profile “journalists” (and cartoonists as well) continue to cling to it.

Sad!
Thanks for reading, and if you've enjoyed this piece, please consider supporting me via Ko-fi. Aussies, know your rights!
Posted by MattHaydenAU at 7:36 PM