A few months ago in Britain BoJo mentioned that he was supportive of a push to shift the BBC over to a subscription-based service. Of course all the Limey lefties went ballistic over this. But many Tories also expressed their resistance to this idea. More than one described it as "cultural vandalism".

I thought this phrase sounded OTT and a tad snobby, but still memorable. And its use in reference to the Beeb was ironic, given that the institution is now completely dominated by cultural Marxists who are hell bent on destroying Western civilization. Wasn't the PC Left's takeover of it a better example of cultural vandalism than the idea of "privatizing" it somehow?
Then there's the fact that many of those same cultural Marxists are highly supportive of groups like Antifa. These radicals claim to believe in true democracy and say they are genuine defenders of the rights of the little guy. But in reality they're massively funded by globalist elitists such as George Soros.
Basically, they're just a bunch of cowardly bullies who wanna wreck stuff. And the black clad goons engage in literal cultural vandalism such as defacing and toppling statues of famous historical figures.
Disturbingly, but not surprisingly, there's a lot of support for them in Australia's MSM. Given that Trump has pledged to classify them as terrorists, it's inevitable that the same thing will happen here.
Many "journos" have been playing footsies with them for a while. They should rethink that strategy for their own sake as much as anything else. Though I doubt very much that they will.
Twitter is of course chockas with idiots who openly claim allegiance to Antifa. Take this muppet. 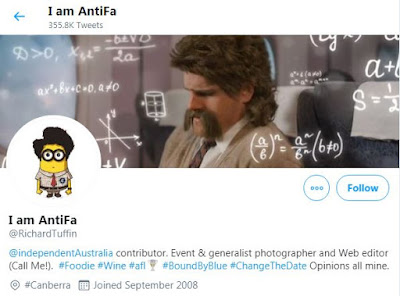 Amazingly, the guy is a photographer. He has aesthetic sensibilities. He takes time and effort to frame shots and edit them to make them look just right. He's actually a kind of artist -- a bit like a sculptor, really.
So, you'd think he might be reluctant to be associated with a bunch of violent thugs who routinely tear down statues. But nup. He reckons they're the duck's nuts!
And he thought that the whole idea of toppling the one of Captain Cook in Hyde Park was all fine and dandy. He even invited fellow members of the Twitter trollective to sneer at those who joined the cops in defending it. 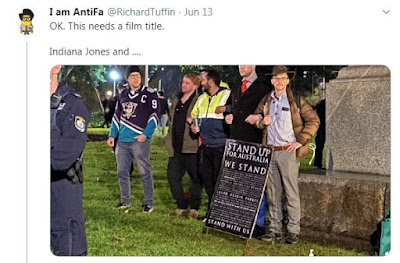 I find it fascinating that someone who clearly has creative ability is so supportive of the destruction of work by a fellow artist. Sure, the dude thinks the monument represents something abhorrent. But if you feel that way, isn't it better to leave it standing so that you can criticize the system you say it glorifies? You can also create your own works that counter it. If you just tear it down you're removing evidence of what you're trying to avoid, right?
And hasn't he considered the possibility that his own creations might be next? This is becoming increasingly likely, too. As SJWs become more emboldened and deranged, they regularly "eat their own". If that occurs, will he be happy about it? Obviously not.
And I think it's pretty funny that he sneered at those dudes keeping watch over the statue. After all, he sees himself as a staunch defender of their ABC and tweets a "line in the sand" against those "fiscal fascists" in the Australian Government. 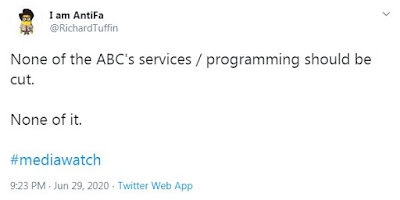 I think that tweet says it all. He is Antifa, and he condemns vile acts of cultural vandalism. And he sees no contradiction there at all. FFS.
Also I bet many, if not most, of the members of that massive media organization would concur with his views on the above issues. They just tend to be a bit less overt with their terminology, that's all.
One of the things that Aunty's scribes often do to show their support for groups like Antifa and BLM is to call the violent thugs "anti-racism protesters" in articles. So typical, given that they're anti-journalism activists themselves.
Thanks for reading, and if you've enjoyed this piece, please consider supporting me via Ko-fi. Aussies, know your rights!
Posted by MattHaydenAU at 2:13 PM