Were Lise Kingo's "fire drill" comments an example of "hiding in plain sight"?

I have been learning heaps about the globalist elite lately. These people are fricken creepy as. They have truly sinister plans for humanity, and they're now going into high gear in their efforts to have them realized. They really do wanna install a one world government, massively reduce the world's population and have us all hooked up to an immense control system run on AI.
Many members of the globalist Cabal, along with Deep State denizens and the leaders of globalist organizations such as the United Nations are zealous believers in creating order out of chaos. They actually engineer crises so that they can come in and save the normies from the problems that they themselves created. Their solutions always involve them having increased power and control over the population, natch.
Apparently they believe that these obviously evil tactics are justified because in the end they will bring in a global utopia. And one of their conditions is that they must actually tell the normies what they're up to in some oblique way. If they're not sprung and held to account, then in their twisted little minds that neutralizes the badness of what they did.
You could call this practice a kind of "hiding in plain sight". It's like a seasoned scammer telling his mark that he's gonna fleece him, but in a charming, tongue in cheek way, then doing just that and getting away with it. If the fraud ever has pangs of guilt (obviously highly unlikely) he can assuage them by saying to himself: "Well, I did tell him ..."
Here's what I think might be an example of this demented behaviour. It comes from Lise Kingo. She says that this global pandemic is a "fire drill" for the effects of climate change. 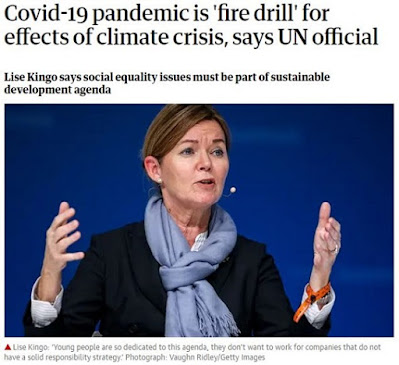 She adds that this is a "wake-up call", but it's also like she's admitting it's a literal drill (hoax) that the globalist elite engineered.
"She said there were 'very, very clear connections' between the Covid-19 and climate crises, and the Black Lives Matter protests around the world, which she said had helped to reveal deep-seated inequalities and 'endemic and structural racism'."
She continues: “We have seen illustrated to everyone that social inequality issues are part of the sustainable development agenda."
So, on one level she's describing what she and her fellow travellers in the MSM claim are organic phenomena. But we all know that's absolute BS. These things have all been engineered.
So, her words can also be read as a kind of confession: "True, corona bollocks, the AGW scam and Soros-funded BLM riots are all linked. They're meant to illustrate to everyone that they'd better get with the program we've laid out for them, or else we'll arrange greater chaos down the track ... So do what we say, or suffer the consequences."
Another likely example of this creepy phenomenon from these loathsome control freaks was when the Democrats "took a knee" in honour of George Floyd.
Remember how he died? Looked very much like they were identifying with the murderer. Chilling.
I talk about this and related subjects in the video below, shot at the base of the Captain Cook statue in Hyde Park.
Thanks for reading, and if you've enjoyed this piece, please consider supporting me via Ko-fi. Aussies, know your rights!
Posted by MattHaydenAU at 1:35 PM