Does the "chess is racist" narrative mean we're nearing the endgame?

Now, we all know that PC lefties are emotionally retarded quarterwits who are always chucking massive tanties to get what they want. They love nothing more than to throw themselves holus bolus into a fit of foam-spitting, swivel-eyed rage, triggered bigly over an imagined injustice.
On the face of it, this phenomenon looks like the unfortunate result of many different factors including cultural Marxist indoctrination, family breakdown, and the cult of narcissism enabled by social media. But I reckon it's not just some perfect storm of mass stupidity that came about mainly by chance. It's been very carefully engineered from on high by the globalist elite. They have control of many institutions and industries including higher education, Hollywood and most significantly the mainstream media. So they have painstakingly created the social, cultural and economic environment that produced these shrieking loons. These evil elites are now using their useful idiots to destroy Western civilization.
If you think of the world as a giant chess game, it's like they're the pimply rich kid playing a precocious grand master of the same age. The reigning champ may be very young but he's studied the greats of the game and is running rings around his spoiled, arrogant opponent. The rich kid sulks because he's losing, then suddenly sweeps all the pieces off the board in a fit of rage. The champ patiently attempts to put the pieces back in place but the rich kid sneers: "No, don't try to cheat. I won!" And he gets his security detail to hold his opponent in his chair as he rewrites the rules to his liking. He then forces the now traumatized player to continue this very simplified game that he is destined to lose.
This ordo ab chao (order out of chaos) strategy is what the globalist elite use every time. And they're doing it now in an absolutely yuge way against Donald Trump, who is an existential threat to them. By running various psyops such as the WHO-dictated worldwide lockdown to "keep us all safe" from the coronavirus pandemic, along with funding Antifa and BLM so they can run amok tearing down statues, looting stores and beating people up all over the joint, they are tryna wreak so much havoc -- particularly in the USA -- that the normies will vote Trump out just to make it all stop! The MSM's round the clock COVID-19 fear porn in particular is a desperate effort to enable mail-in voting so their puppet party the Democrats can cheat on a larger scale than ever before.
Hell, here in Oz they're even using the game of chess itself as a kinda micro-front in this global effort to gaslight us into a state of exhausted compliance. Basically, in applying the Black Lives Matter rage template, a controlled asshat from their ABC has promoted the narrative that chess is racist, contacting an Aussie former game official for comment. 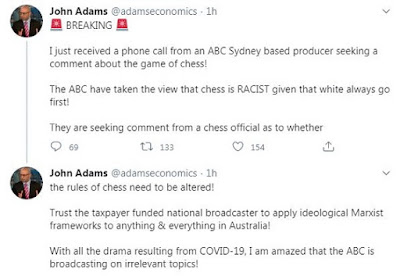 So this mind-controlled muppet dinkum reckons chess is racist because white moves first. But this does not necessarily follow. Remember that if a bloke opens a door for a chick and says "you first" that's sexist, innit? So, if black gets the first move isn't that just reinforcing the dominant paradigm of white supremacy?
Then there's the LGBTIQZZTOPWTF angle. Having a king and queen invokes the heterosexist gender binary, right? Given that woke folk are always on the lookout for some imagined injustice to whine about, expect some rainbow activist to ask: "Why aren't there two queens in a same-sex marriage, both with equal power?" But that itself is sexist, because the queens are dudes, remember ...
Really, the intersectional insanity never ends. And that's the whole point.
These robodolts simply can't help themselves. They've been programmed with very basic, "seek and destroy" software. That's why those NPC (non player character) memes were so funny, and accurate.
It's like with the statues. They started out tearing down ones of reviled figures linked to slavery. That in itself was indefensible, since the whole point of retaining such monuments is to remind us of our legacy -- both good and bad. Those who forget history are doomed to repeat it, as the saying goes ...
But the mind virus inflamed the already fired up woke folk to such a degree that they ended up going after any old bronze dude on a plinth. The NSW police literally had to form a ring around the Captain Cook statue in Hyde Park to prevent it from being toppled by "anti-racism" protesters. Then it was vandalized (allegedly by a Greens staffer) in the dead of night a coupla days later. FFS, there are even coppers stationed there during the day now! 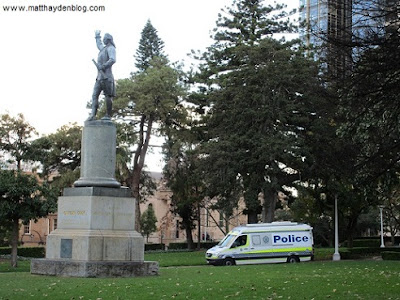 Are we gonna see a similar campaign against another feature of Hyde Park, the giant chess board?
Part of me thinks: "Nah, they couldn't be that stupid ... could they?"
Still, if these Soros-funded goons do end up tryna nick the pieces, take a nocturnal dump on the board, or do something else that revolting and retarded I really won't be surprised ... 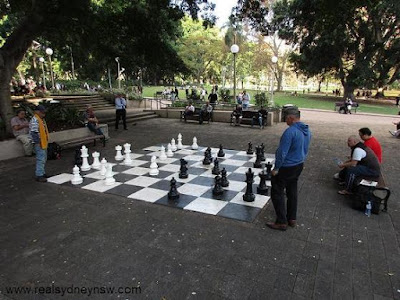 With the globalists' useful idiots in such a constant state of violent insanity and examples of "life imitating satire" too numerous to mention, I think we really are nearing the endgame.
Can't wait for the worst of it to be over. I think that will come in November, when Trump finally says "Checkmate. You're fired!"
Sooo looking forward to that day.
Thanks for reading, and if you've enjoyed this piece please consider supporting me via Ko-fi. Aussies, know your rights!
Posted by MattHaydenAU at 1:01 PM