So Black Lives Matter protests went ahead in Australia and even though there was some token resistance from pollies like Gladys Berejiklian regarding the coronavirus public health risk, little if anything was done to ensure that social distancing laws were obeyed. (That's not to say the police didn't do a fine job of keeping everything calm and ordered, BTW. Here in Sydney there was a minor flare up at Central Station but that was about it.)
Remember that these insane, totalitarian measures have been enforced before. There was that woman who was arrested with her kid outside State Parliament on Macquarie Street. Also, at a recent anti-vaxx protest in Hyde park officers repeatedly reminded protesters to social distance, which they did. (Also, those present then didn't chant "fark the police" -- one of several, er, cultural distinctions between those guys and the "anti-racism" rent-a-crowd.)
Clearly, when it comes to PC causes, there is a yuge double standard. This is by design to cause division and enmity in the wider population. It is truly poisonous stuff. The "Coronapocalypse" is the least of our worries. It's the PC mind virus we should be most concerned about!
The majority of Aussies are now pissed off like never before because for weeks on end they've obeyed absurd lockdown measures to prevent the spread of a flu-like illness that has killed hardly anyone here so far. And they continue to abide by the various petty restrictions that still remain. So why did these well-funded leftist radicals and anarchists get a pass?
That provocation of law-abiding normies by the globalist elite is intentional. And their muppets in their ABC and other fake news MSM outlets are doing their darnedest to inflame tensions by peddling the PC narrative that the whole infantile BLM shit-show is noble, righteous and edifying.
But IMO the sick psyop will become net negative for its amoral architects. That's because the much-feared second wave of COVID-19 won't actually result from these events. This'll make it even more obvious to everyone that the government and media promoted fear of the coronavirus pandemic was not justified to start with.
So the BLM movement will lose much of the support it had in the wider community. Pissed off normies will be curious about who's really behind it and get red-pilled regarding Soros and the globalist Cabal, etc. The social control agenda motivating the coronavirus fear-pawn will become crystal clear to yuge numbers of Aussies.
Like most leftie demos, the BLM ones here have been utterly incoherent. Sure, they were massive. But they were definitely not spontaneous. They actually resulted from a very focused promotional campaign by a team of well-funded and experienced organizers.
I saw a small segment of the one in Sydney on Saturday arvo and got these snaps. 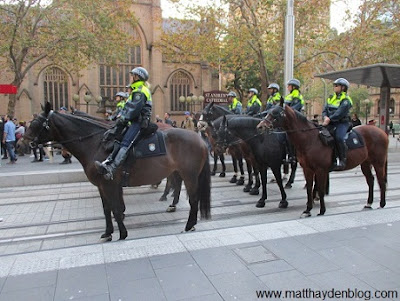 These mounted cops were on George Street at the tail end of a procession leaving Town Hall. 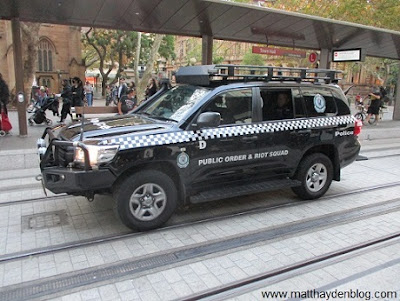 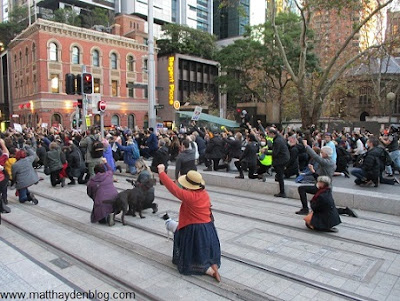 This was my first view of the crowd. I think they were imitating the speakers, tryna do a black power salute or something. Pretty funny, because they were almost all whitey-tighties.
They really were a sad, robotic bunch. And there were silly placards aplenty, natch.
I saw a couple reading "silence is violence". But this was from the same people who think speech is too. WTF? And of course nothing that their side does is violence -- including, er, actual violence. So dumb -- which is why it was a pleasant surprise to see one reading "peace is love"!
As the video above shows, a large percentage of the crowd wore masks. With the useless coverings so common at these rallies (and everywhere else) across the world, it looks like the globalist elite are tryna provoke both a race war and a face war. Hopefully with all the confusion they've created they'll end up getting neither. 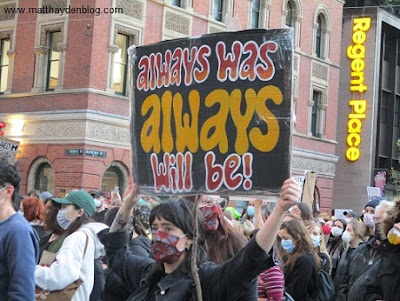 "Always was, always will be ... Regent Place?"
Oh dear. No one told her she was doing it wrong ...
Also, look closely at the protester herself. She might be Eurasian but I doubt she's Aboriginal. And examine the other faces in the crowd. Majority Anglos for sure. And I'll bet that at least some of them own real estate, making their chanted claim that this was "Aboriginal land" ring even more hollow. 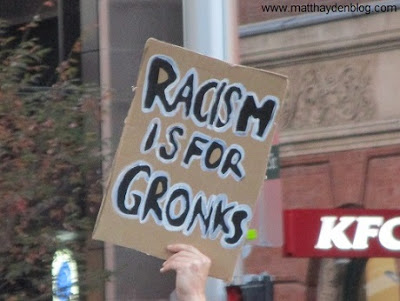 Have to agree with this one. George Soros and the other creepy globalists behind these racially divisive movements are gronks, alright!
I also saw the odd sign like the one Greens senator Mehreen Faruqi is so proudly displaying in her tweet below. 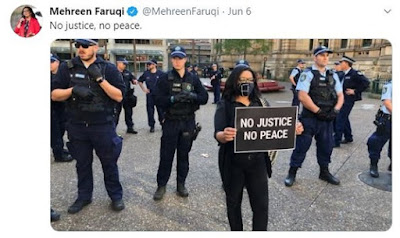 M'kay ... So the protesters claim to want justice. But they also say cops are brutal, racist scum. And now, in the USA, Mehreen's fellow travellers are actually demanding that police forces be defunded.
So, it's not like they want cops to be "attitudinally reconstructed". They don't want them at all! But without men and women in blue out on the beat enforcing the law, how can there ever be justice?
That said, I doubt that's what the BLM activists really want. The point is to have something for them to arc up about. Then they get to hector, harangue and bully the wider population. Which is how they eventually gain top-down, coercive power. And that's ultimately what this whole movement is all about.
And here's another tweet I thought was pretty funny. 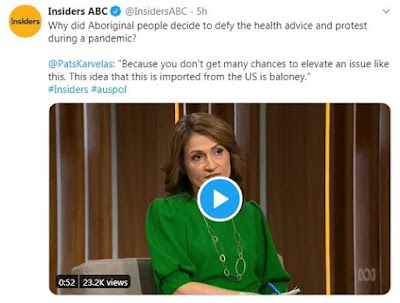 Activist purporting to be journalist Patricia Karvelas imports a term from the US (baloney) to claim that the Black Lives Matter demos in Australia were totes dinkum. But that's an obviously fake narrative also imported from the US, via their mainstream media.
The PC Left always was, always will be ... phony-baloney.
And their desperation to make this yuge con work is palpable. But as I mentioned in the beginning of this post, it's actually backfiring bigly. Aussies, like their counterparts in America and every other nation in which these stupid demos were held, are waking up en masse to the lies of the globalist elite like never before. This race-based psyop is doomed to fail, just like the "Coronapocalypse" and "climate emergency" before it.
You've really gotta wonder what these crazy control freaks will try next.
In any case, the Australian Government should learn their lesson from this and acknowledge how disastrously stupid the lockdown strategy has been. If they don't open up the entire country right now and apologize profusely to us all, they will never be able to live it down.
Thanks for reading, and if you've enjoyed this piece, please consider supporting me via Ko-fi. Aussies, know your rights!
Posted by MattHaydenAU at 1:16 PM