By now it must be completely obvious to any sane adult that all these lockdown measures still in place across the globe aren't really about stopping a "coronavirus pandemic" that originally came from bat soup. They are a way of softening us up psychologically so we can be ushered into a permanent, global "new normal" being run centrally by totalitarian technocrats.
The exhortations -- or in many places official orders -- to wear masks comprise a yuge global submission ritual. These policies are not being proposed by local public health experts rationally due to local conditions. They seem to have resulted from top down pressure from the World Stealth Organization and are all about politics. Dr Tedros the Mega-Flog even flat out says as much in this recent tweet. 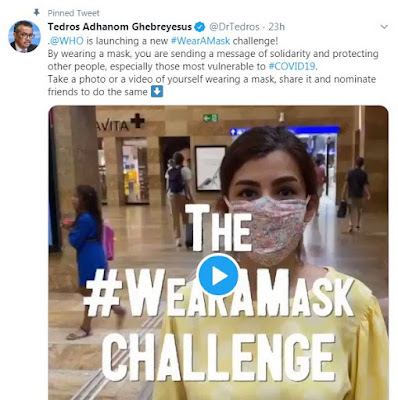 So wearing a mask is not really a proven COVID-19 prevention measure. Rather, it is a way of "sending a message of solidarity". Spoken like a true Marxist.
The only message I get from those willingly wearing masks -- particularly custom made fabric ones as opposed to the disposable light blue ones -- is that they're fricken idiots. And we've got plenty of those in Australia, especially in our MSM. Take this doofus, Dan Ilic. 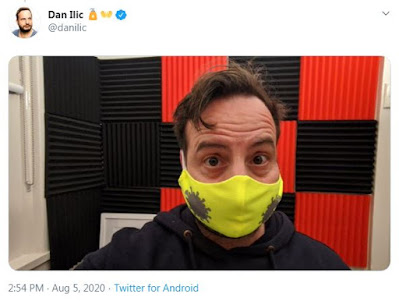 He's got a whole bunch of fashionable face diapers that he's been showing off on Twitter. Love how this one includes that little symbol for the dreaded 'rona. It's instantly recognizable the world over. That's because as well as being a highly woke bug, it's also branded. Hell, it has its own marketing department!
You can even see it in this recent Daily Telegraph cartoon.
Like so many local slebs, dopey Dan gets his views on US politics from the American MSM, thinking that it must be totes legit! Recently he retweeted a New York Times columnist who was fretting about how the whole QAnon movement was rapidly gathering momentum. 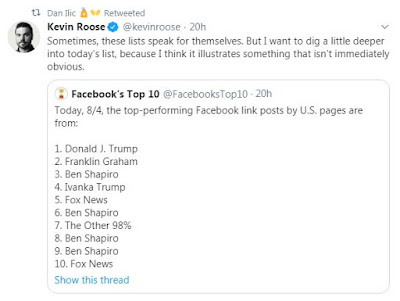 In this tweet thread Kevin Roose explains that several of the MSM stories on the list had their FB shares yugely boosted by those mask-avoiding, tinfoil hat-wearing Q-tards:
Now, normally, you'd be surprised that a $35 million grant by an obscure federal agency would be the highest-performing story on Facebook.
But people who follow this stuff know that stories about human trafficking, *especially* stories involving Trump, are a QAnon bat signal.
"A QAnon bat signal." LOL. And we're supposed to be the batshit ones!
And sure enough, if you check which pages shared these stories, you'll see plenty of QAnon pages like "Follow the White Rabbit" and "The Great Awakening."
They're using the story as more evidence that Trump is breaking up a child-trafficking cabal run by Democrats.
This is why looking at top-performing links (which Facebook has recently suggested is more accurate than looking at the posts that contain those links) can be misleading. After all, this is an AP story! What's the matter with the AP?
But the way it's being used is dangerous.
Fascinating that he describes this link sharing -- clearly motivated primarily by the desire to end elite child trafficking -- as "dangerous".
Well, I suppose it is in a way. It threatens the globalist power structure that controls the MSM, and therefore the dominant narratives through which billions of people construct their view of reality.
In any case this is what seems to disturb poor Kevin most and not the fact that countless elite rock spiders are raping and murdering kids the world over and getting away with it. Even if you think that Q followers have a particularly crazy take on things there's still no denying that this sickeningly evil stuff is going on and has been for ages.
And whether Kevin likes it or not this battle of narratives is definitely coming to a head in the USA. QAnon is set to usurp the Mockingbird Media after a titanic, tumultuous meme-splattered grudge match. The same thing will surely follow here in Oz.
As the saying goes, nothing can stop what is coming.
In the video below are some observations I recorded when the local MSM first "reported" on this issue last year.
Thanks for reading, and if you've enjoyed this piece, please consider supporting me via Ko-fi.
Posted by MattHaydenAU at 3:50 PM