The pyramid-shaped garden beds are gone but others remain. Why?

In recent months I noticed an interdasting phenomenon in the Sydney CBD. After a very obvious green pyramid was placed near the Cenotaph in Martin Place, many smaller flat ones appeared in that area and several others. These pyramid-shaped garden beds were all pointing in the same direction. And all of them were placed in close proximity to a statue of Queen Victoria.

Lord Mayor Clover Moore has form for being very arty and "out there". So I tried to work out what these displays were aiming to communicate symbolically. I speculated that she and/or her fellow travellers in the City of Sydney were using them as a kind of incantation to help usher Sydneysiders into the "new normal" -- which is actually just another term for New World Order.

In this "spell" the "pyramids" were placed near the statues as if to say: "The Crown (old normal) is dead. Long live the Corona (new normal)!"

Of course I'll never know for sure. But I think I might have been getting warm with that theory because recently those particular garden beds have been removed from all those locations. Yet other square or rectangular ones remain. Compare these shots below with the ones in the post linked above. 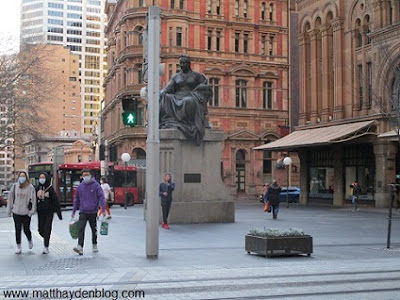 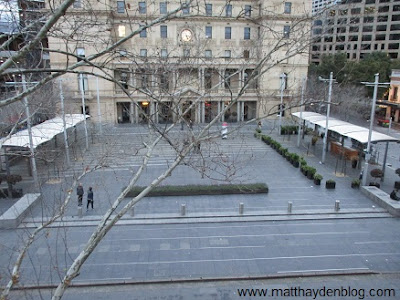 If they were just meant to look nice and had no special meaning then why were they selectively removed? They must have signified something quite specific. The question is what, exactly?

I don't pretend to be correct a hundred percent of the time. But remember that all art is symbolic. It's meant to communicate something to "those in the know". It also aims to be transformative somehow, even if just temporarily. It's a kind of ritual.

Take theatre, for example. You are ushered (literally) into a big dark room with lots of other people in which you watch actors play out a highly structured, well-rehearsed script zif it's all actually happening spontaneously before you. The convention is that you suspend disbelief when in that zone. It's as if you are in another dimension.

Afterwards, the lights come up and the ritual is finally over. The spell is broken, so to speak. You go back outside into the real world again.

So, something similar was going on here, I reckon. And the symbolism was definitely characteristic of the globalist, occult elite.

Posted by MattHaydenAU at 6:07 PM