They are the Human Centipede

I've long known that the mainstream media aren't dinkum truth-seekers who report without fear or favour, as they claim to do. They are clearly very selective about what they investigate and will almost always roam in packs. They are mostly left-leaning and drearily politically correct to boot.
But up until the election of President Trump I never thought they were corrupt across the board. Sadly, it's becoming increasingly obvious that they are.
Take the relentless fear pawn that they've been cranking out over COVID-19. And notice how they push vaccines all the time while throwing shade on safe, effective and cheap cures like HCQ.
Then there's the issue of QAnon. Right from the get-go they have been tryna keep the normies from looking into this issue. And they all just repeat each others' lies about it. The whole sorry situation makes me think of that classic song by Skyhooks: "It's a horror movie, right there on my TV ..."
It's not just that they are so often tryna scare us. It's the MSM's complete and utter corruption that is actually more terrifying in a way. And I think the horror flick The Human Centipede is what captures the whole demented, gruesome shit-show best. 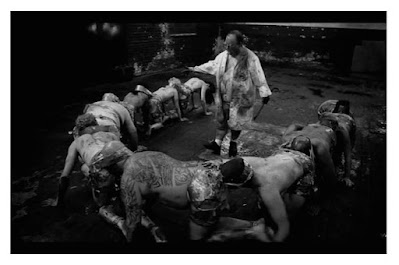 If you aren't aware of this movie series, the first one is about a batshit Bavarian boffin who -- for shits and giggles -- kidnaps three backpackers then stitches them to each other, mouth to anus. The second one, which is where the above screenshot is from, is about a sick loser who is, er, inspired by the first flick to create his own version of the human centipede -- this time with twelve victims. So it's actually quite "meta".
And that about sums up the mainstream media. They get their 4 AM talking points from the Deep State, which are often brazen lies at worst and highly selective narratives that further the globalist agenda at best. Then they all pompously, shamelessly regurgitate them on air, in print and online, often with local variations. They basically start out eating shit then pass it on, clacker to pie-hole, through a gruesome, global network of narcissists so vast and all-pervasive that it eventually pollutes the entire fricken world!
It's pretty much impossible for any single one of them to remove himself from his wretched position because his fugly mug has been surgically sewn onto the arse of the zombie in front, with another one behind, bolted to his butt! But if he does manage to extricate himself from the putrid crazy-chain he just gets "boned" and another poor robodolt brainwashed by cultural Marxism takes his place.
Being utterly controlled by demented freaks, the vast majority of today's "journalists" are completely morally lost. This is pretty clear much of the time. But it's never more obvious than when they "report" on QAnon. 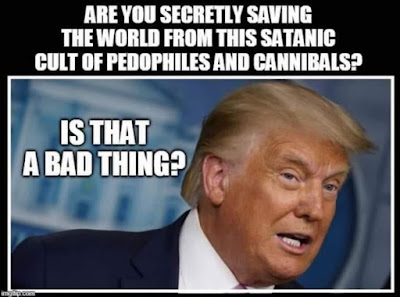 Take the recent interchange in the Whitehouse when a Q-obsessed reporter asked if Trump is secretly fighting a cannibal cabal of Luciferian rock spiders, as so many of the movement's members believe.
He answered: "Is that a bad thing?"
That was (stable) genius because it framed the whole issue in a clear, unambiguous moral light. This means that ultimately proving the veracity of rumours about super-elite Satanist pedophile rings is not crucial -- and Q's identity can remain hidden -- because the MSM clearly thinks it is a bad thing.
It is now blindingly obvious to all that as well as producing fake news pretty much the whole time, the controlled arsehats of the airwaves are utterly morally lost. They are so full of hatred for patriots, and so bereft of a sense of universal right and wrong that they actually side with such evil freaks -- even if they don't exist!
These useful idiots are in for one hell of a shock when the lies they have been telling for so many years are no longer believed by most normies and it ultimately results in them losing their jobs. That's gonna be very entertaining.
The sense of confusion and betrayal of those who have trusted them for so long, on the other hand, will be very painful to watch. I suspect some of them will actually lose their minds, which is tragic.
That's how poisonous this whole mind control matrix actually is. I will be so glad when it's finally torn down.
Thanks for reading, and if you've enjoyed this piece, please consider supporting me via Ko-fi. Aussies, know your rights!
Posted by MattHaydenAU at 7:49 PM