Australian MSM: "QAnon followers are bad because they are against evil!"

As we approach the American elections in early November the information war is really hotting up. More and more people across the globe are waking up to just how corrupt the mainstream media are. They're also becoming aware of the alternative narrative that the whole QAnon movement offers. So hit pieces against it are coming thick and fast in the US. They're also increasing in number and intensity in Australia.

Check out this one shown on Perth TV. Not surprisingly it just repeats the same old Mockingbird Media talking points. But what's great is just how many Aussies are wise to it. When I took the screenshot below a few days ago there were already hundreds of replies, many of them from QAnon followers.

The other tweets on local issues have a mere fraction of the engagement. So, the Great Awakening is definitely happening worldwide! 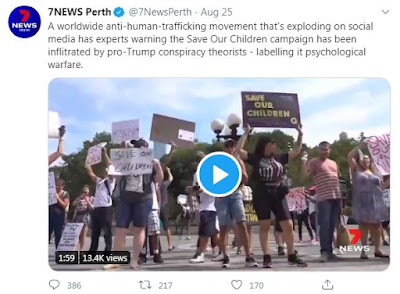 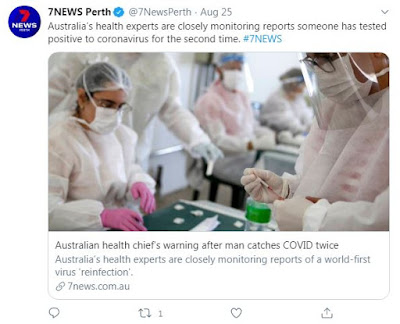 Anchorman Rick Ardon: Experts warn the "save our children" campaign has been infiltrated by pro-Trump conspiracy theorists, labeling it psychological warfare.

That statement is a doozy, innit? Experts? Experts in what? The one they've interviewed in the story is a social media marketing guru.

Then there's that ol' fake news fave, the "conspiracy theorist" label. There are literally hundreds of millions of people subscribing to this narrative now. They are from many nations and right across the political spectrum.

Yes, they love Trump, but that's because he is actually shutting down child trafficking networks. The data confirms this. This very channel even has local reports that can be seen to support this narrative. It's likely that Trump's campaign has had something to do with this major development in WA but even if it didn't it's still clear that child trafficking is disturbingly widespread and has long been so. So to try and demonize people whose primary goal is to see this horror end is just pathetic.

It's also completely silly to say these "dangerous" people have "infiltrated" a hashtag. Sounds like a conspiracy theory itself to me ...

Journo: A cause that's been hijacked by internet conspiracy theory QAnon Labelled a potential domestic terror threat by the FBI …

This oft-repeated claim is pretty much bollocks. It all started when some dude issued a memo in the Phoenix, Arizona office. Not an official statement from the entire agency at all.

The dopey muppets in Perth have clearly taken this notion from a widely read gargle by a dude called Kevin Roose. They must have thought it was dinkum because it was in the "Grey Lady". Sad!

This is a nice take down of it among other things.

Meg Coffey: "This is psychological warfare that is happening ... You say it enough times and they start to believe it themselves."

Oh the irony! These poor muppets are just repeating the fake news narrative that they've been brainwashed into believing. It's the globalist, Deep State mind virus, a self-replicating big lie.

So now they've completely cornered themselves. They have absolutely nowhere to go. All they can do is repeat the same bollocks over and over again. But anyone with any moral sense at all can see what's going on. Even if they don't think Q is legit and reject claims about Luciferian rock spiders in high places, they can tell this is a moral issue first and foremost. And the MSM have definitely chosen a side. Without a doubt it's the wrong one!

That's creepy as all get out. It's also sad, because they don't have the slightest clue about how bad they look to their audience, more and more of whom are waking up daily.

Also, by believing their own propaganda and not investigating the issue of QAnon with an open mind they are way behind everyone else including yours truly. I recorded the video below about a year ago and while it obviously lacks the sheen that "legit" news reports have, and I do ramble a bit because I'm speaking extempore, it's still a more informative and balanced take on it than anything you'll see in our MSM.

Posted by MattHaydenAU at 2:56 PM