The label "Dictator Dan" is not an exaggeration

It's great that some MSM journos are starting to ask pertinent questions of Dictator Dan Andrews. And more and more movers and shakers across Australia are arcing up about his insanely OTT measures.

He's clearly Australia's most zealous NWO control-freak and a puppet of commie China. It's so obvious what his plan is with coronavirus. Basically it's to keep the fear of it high with massaged stats, so that people keep getting tested. The more of these that are performed, the more cases they have. And it's those rolling updates with the scary numbers that give him and his clown CHO the justification for continuing the totalitarian lockdown.

So he hasn't stuffed up. He's actually carrying out a classic commie subversion plan with ruthless efficiency.

The most direct way to demonstrate that the whole thing is a ruse is to look at what happened early on. Right from the get-go, Victoria had the harshest lockdown measures. It also had the most cooperative citizens. This was because it is by far Australia's most left-wing, right-on state. (I know this from personal -- and political! -- experience. I lived there for 8 years in the 90s.)

Dr Vaxxie McNeedle made that very point back in June.

So, if Victoria did "everything right", then why did it have the worst outcomes? And this strange anomaly has only become more pronounced in the ensuing months. If the measures that Dictator Dan keeps ratcheting up are genuinely effective, then why do the case numbers keep increasing also?

The rational answer: because they don't fricken work! So let's dump them!

And why don't they do this? Because it's the tail wagging the dog ... This is not about keeping people safe, it's about installing a tyrannical control system.

The process is to scare the normies into getting tested. Then use the test results to justify lockdown measures. When the people arc up, say: "But look at the stats. We're only doing this to keep you safe!"

This is what the globalist arseholes want to do indefinitely. That's why they call it the "new normal". It's meant to go on forever.

It's also why they've been so determined to slap down any protests -- well, unless they're woke, that is. That whole BLM thing is a related campaign by the globalist elite. It's meant to keep people alienated from each other, stressed out in another way. It's classic divide and conquer.

And the Spring St Ghoul and his creepy minions have been up to other kinds of mind-war to keep the normies confused and cowed. Take that recent freedom protest in Melbourne. It may have started organically but I suspect it was infiltrated with agent provocateurs to get violent and be dealt with harshly by the plods. That way Dictator Dan had another excuse for continuing his insane lockdown: "Look, I really don't wanna extend this, but the tinfoil-hat wearing anti-mask conspiracy theorist right-wing terrorists wrecked it for ya."

This tyrant knows that MSM robodolts -- especially those in Channel 7 and 9 -- will always dutifully promote his propaganda. Their so-called journos are not remotely interested in the truth. They are there to "program" the masses with fake news; to keep them distracted from what the globalist elite who control them and the Premier himself are truly up to.

There will still be many Victorians who watch those primping, preening fake news flogs and believe they have some kinda authority because they totes "look the part". So, they'll remain easily controlled which is what this is ultimately all about for the sinister freak and those above him pulling his strings. 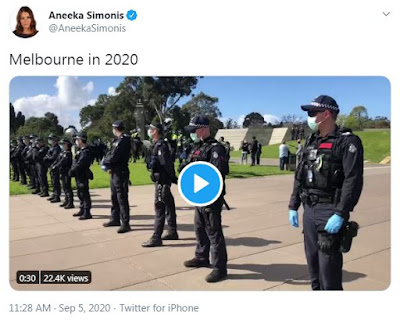 This tactic of having a massive, intimidating police presence to theatrically smack down any resistance that they've prolly arranged at arm's length themselves is a favourite of the globalist elite. And note how the employment of this strategy (along with others) seems to occur simultaneously in many different countries.

We've had the insanely OTT lockdowns then a yuge global push for masks -- even though the worst had passed and each country was dealing with its own unique situation.

Now these goon squads are appearing everywhere. They're all centrally controlled, NWO-style. 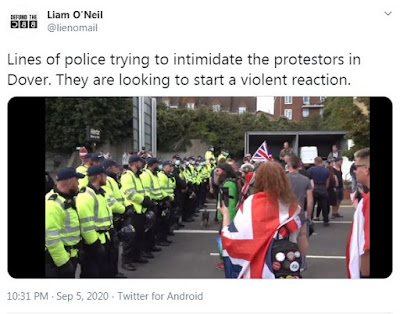 Melbourne's recent show of farce would've also put the fear of plod into many unconvinced that the whole Stage 4 shit-show was dinkum meant to "keep them safe". Many surely now suspect a con but being meek and agreeable they'll obey because they're afraid. So, they'll be controllable too.

This idiot throwing a Nazi salute is prolly a crisis actor. But even if he isn't, it's exactly the kind of thing the fake news MSM just loves. They run this angle that he's somehow more of a threat to democracy than the rows of heavily armed goons employed by Dictator Dan. FFS. 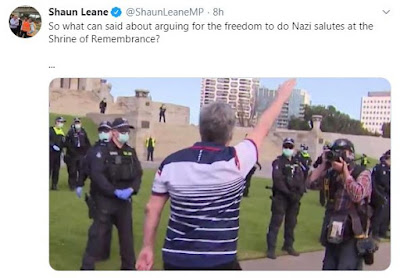 Other recent events that looked staged include the shocking arrest of the young mum, and the choking of the young maskless woman in Collingwood by a grey-haired copper (who also seemed present at Ballarat). These will also terrify many normies. "Shit, I don't want that to happen to me!" they'll fret. "Best obey."

Of course there is already a substantial percentage of the population -- fast growing in number -- who see through all this bollocks. But it's still disturbing and confusing to them. They're "on the back foot". So Dictator Dan is still in the driver's seat, defining the MSM narrative, with plods at his command. Which is why he keeps ploughing on so shamelessly.

But ultimately the Goblin of the South is riding tiger called COVID-19. If he doesn't keep upping the ante he's well and truly farked. Soon his big lie will be so obvious to all that millions may well just dump their masks, flout the curfew, and get back to work.

He simply doesn't have enough coppers to control them all. Having this happen is surely his bigliest fear. Hopefully, it will soon be realized!

Posted by MattHaydenAU at 2:23 PM