The situation in Victoria just gets worse every day. I really pity the poor bastards living in that state. And Melbourne itself is already like a full-on dystopian hellscape.

But it can't all be because of the malignant mind of the control-freak Dan Andrews. Sure, the Goblin of the South is a narcissistic, nasty piece of work. But he's also a useful idiot for those above him in the power pyramid.

The way I see it, he and his ghoulish government are crucial elements in the globalist mind control matrix. 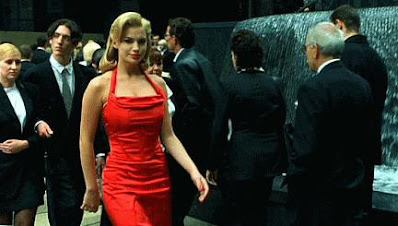 Remember that this "occult elite" have all the bases covered, and slyly further their globalist agenda by dodgying up events (at arm's length of course) then defining the masses' interpretation of these via their ownership and control of the mainstream media. They have long done this with terrorism, for example.

Basically they engineer these horrific acts of violence by funding radical groups, then allowing certain unhinged individuals to escape detection through their control of the political system. IMO a good example of this tactic was the Lindt Cafe siege in 2014. It was perpetrated by Man Monis.

As all Australians remember, that lethal crisis unfolded literally metres away from Channel 7 in the Sydney CBD. So ironic that the fountain featured in The Matrix movie shown above is actually located between those two buildings, a mere two blocks down Martin Place towards George Street. (Please check out the video I made about that event from directly behind the fountain.) 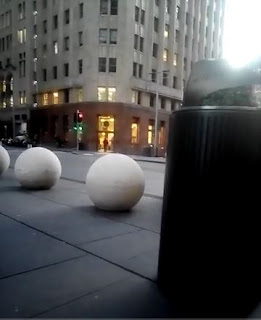 Man Monis was as much a puppet as he was a self-directed perpetrator of violence. And I think the same can be said of Dan Andrews. What the former did to the patrons of the Lindt Cafe, the latter is doing to millions of people within the borders of Victoria.

He's got them all held hostage, and while he isn't holding a gun to their heads as Monis did, he's still got them all under house arrest and is using the threat of literal incarceration -- even for crimes they have not yet committed! Like Monis he's obviously savouring this power, but he's also doing the bidding of his controllers. IMO they are using him and his state's utterly corrupt police force in a brazen psyop to make the normies so detest the men and women on the beat that he'll have justification for defunding the whole operation and putting a globalist "community policing" force in its place.

The Victorian Premier really is "Dan the Man" in the absolute worst way possible. And it says so much that muppet politicians see Van the Man as more of a threat! 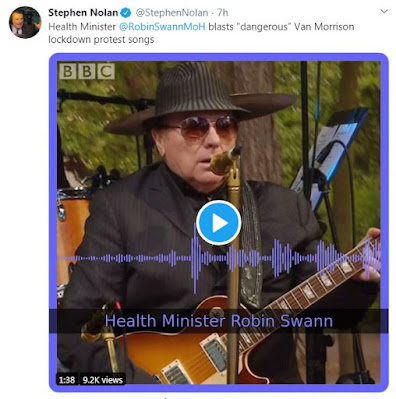 Showing great independence of thought and courage Van Morrison has written songs protesting the lockdown. Very few well known artists have arced up against the creepy technocratic fascism like he has, since they are mostly owned by the same globalist control freaks who are ultimately behind it.

I look forward to these new songs when they come out. In any case, he captured how all sane adults are now thinking and feeling about the global lockdowns in general and the situation in Victoria in particular long ago with his brilliant song "Wonderful Remark". I mention it near the end of this video.

How can you stand the silence

That pervades when we all cry?

How can you watch the violence

That erupts before your eyes?

How can you tell us something

Just to keep us hanging on?

Something that just don't mean nothing

When we see it you are gone

Clinging to some other rainbow

While we're standing waiting in the cold

Telling us the same old story

That was a wonderful remark

I had my eyes closed in the dark

I sighed a million sighs

How can we listen to you

When we know your talk is cheap?

How can we ever question

Why we give more and you keep?

How can your empty laughter

When you're only playing with us

How can we ever feel the freedom

Or the flame lit by the spark?

How can we come out even

When reality is stark?

That was a wonderful remark

I had my eyes closed in the dark

I sighed a million sighs 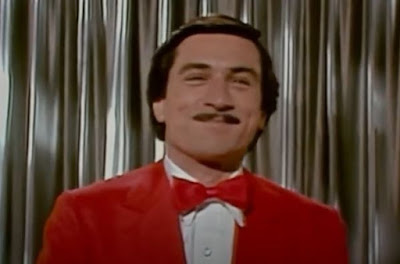 If you've seen Martin Scorsese's brilliant satire The King of Comedy you'll know that this great song plays as the credits roll at the end.

Isn't it ironic (don't you think) that the film's protagonist Rupert Pupkin is a deranged loser comedian with zero talent who finally achieves his dream of being "king for a day" by holding his idol (Jerry Langford -- played by Jerry Lewis) hostage!

So "Dan the Man" can also be seen as a Pupkin-like figure, holding court as "King Victoria" under the NWO Corona, with his trademark royal purple behind him. 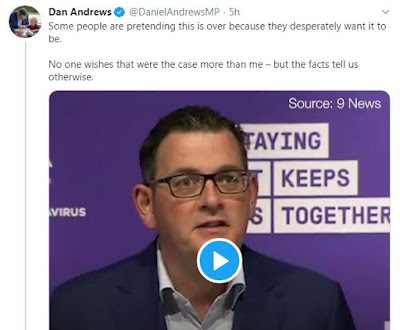 Please watch the video below. Imagine "Dan the Man Pupkin" in De Niro's place. As "Wonderful Remark" plays over the credits see them not as the names of talented crew members who helped realize Scorsese's vision, but the numerous spin-doctors employed by Victorian Labor as well as the so-called "journalists" present at his vomitous COVID-19 updates -- you know, the jellybacked flogs who claim to be "reporting" on the "pandemic" but are actually just regurgitating sinister propaganda. I reckon it really captures the tragic globalist engineered shitshow that is Victoria under that malignant muppet monarch.

And please, if you're one of the self-parodic "I Stand With Dan" fans, then wake the far cup! You've all got your eyes closed in the dark. And this went waaay beyond a joke a long time ago.

Posted by MattHaydenAU at 4:57 PM