The "Doofus Dan" narrative is bait. Don't take it!

Pretty obvious that the way we perceive reality is strongly influenced by our emotions. That's just human nature. But you don't want to be a slave to them. Let them rule you and you'll keep getting fooled by unscrupulous people who know how to push your buttons.

And that's the danger in tryna work out what's really going on down in Victoria. Dan Andrews is a loathsome creature without a doubt. He doesn't just lack concern for the misery he's inflicted on Victorians with his insane measures. He seems to be actually getting off on it!

While a depressingly high number of rusted-on Labor supporters, Karens and sundry other robodolts incapable of thinking for themselves are supportive of Dictator Dan, the rest of the state wants the ghoul's guts for garters.

There seems to be a very strong feeling that he's the root of all the trouble; that when he's gone things will swiftly return to normal. There's also widespread anger about the hotel quarantine debacle and his refusal to take responsibility for any of it.

Among many the "Dan lied, people died" narrative is dominant. They hold him personally responsible for the nearly 800 COVID-19 deaths that it is claimed resulted from that episode.

It's great that journalists are now putting more pressure on Dan Andrews during his daily lie-fests. But IMHO this "Doofus Dan" narrative is ultimately a distraction.

He's actually playing his part in a massive globalist Cabal plan to take over Australia. That's why this story about the Victorian Premier's dealings with China (surprisingly from the The Age, a very PC paper) shows where our attention should really be focused. 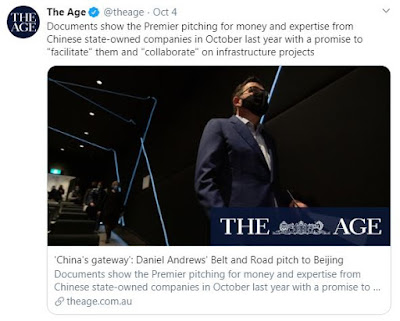 Internal documents obtained under the freedom of information act show Mr Andrews pitching for money and expertise from Chinese state-owned companies in his trip to China in October last year, with a promise to "facilitate" their access to Victoria and "collaborate" on the state's biggest projects.

Victoria, he said, would become “China’s gateway to Australia”.

That is clearly the grand plan. And it's not just commie China that he's letting in. Ultimately it's that whole alliance of globalist elite creeps and Deep State denizens -- in short, the New World Order.

This whole thing is much bigger than Dan Andrews and those endlessly proliferating COVID clusters. The real story -- the elephant in the room -- is the massive global fraud that is Coronabollocks, and how obviously fake stats are being used to justify the fascist lockdown in Victoria to pave the way for Wuhan-style technocratic tyranny.

There's clearly some kind of yuge, diabolical psyop going on. Think of all those viral videos of brutal arrests by the plods, many involving women. Looks very much like this is a calculated ploy to make the normies so detest the coppers that the Government can then offer to replace them with a woke UN force or similar. Victoria is the only state signed up the the Strong Cities Network, remember.

As well as all the police brutality, there's the sinister Omnibus Bill. That looks like a plan to denigrate the police from another angle.

It's like preparation for a BLM-style "Defund the Police" movement Down Under. And not only is the Victorian State Government in on it, the Opposition seem to be as well, along with the MSM. They are all focused on this "Doofus Dan" narrative.

Even if the puppet is punted, the puppeteers are still in control. They will likely opt for a slower, more subtle approach to achieving their globalist goals, but in the end little will have changed.

That's why I think it's so important to stand back and look at the bigger picture. Victoria is clearly the entry point for the NWO in Australia; the place to get their "jackboot in the door". It's not enough to just push back those aiding and abetting the invasion. Do that and the door is still ajar. We're only safe when it is closed entirely.

Posted by MattHaydenAU at 2:15 PM