Kevin Rudd likes to play handball. As we all know, that doesn't require the use of racquets. The very dirty game of globalist politics OTOH, certainly does require them -- albeit spelled differently. If you're gonna "pay to play", you wanna make sure that there's a racket protecting you, right?

Clearly, the biggest part of this is the liberal mainstream media. Look at how desperately they're covering for Biden now. Just jaw-dropping, innit?

But Kevin, who was "handballs deep" in the globalist system when Biden was Vice President and Hillary Clinton was Secretary of State, has a very different view. He thinks that Murdoch is the one running a protection racket -- specifically for the LNP.

Here's an example of why he's so sure of this: Evil Rupert's papers didn't tell their readers about a recent revelation in Senate Estimates that Tony Abbott spent hundreds of thousands of bucks on some "knights and dames" insignias. What an outrage! 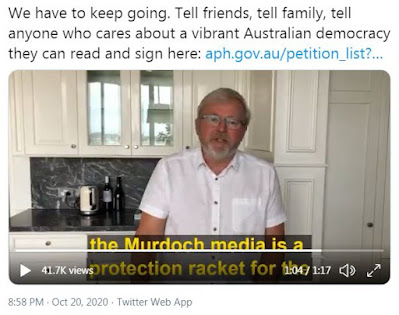 Yet he's not at all disturbed by revelations about the contents of Hunter Biden's hard drive. It's said to be absolutely horrific. One dude who's actually viewed some of it says that on a scale in which 1 is a "snoozefest" and 10 is "can't unsee" it scores a 20! 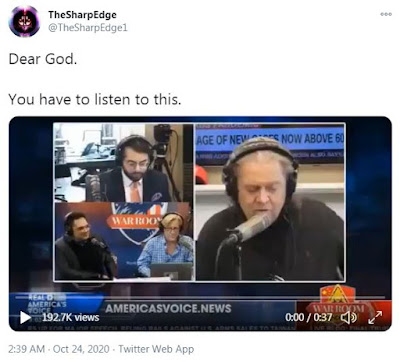 Not surprisingly Kevin believes the fake news line being pushed in the USA which is that the Russians are behind this elaborate hoax, and Murdoch is working hard to present it as dinkum via the New York Post. He said as much in a recent interview with an ABC journalist, who didn't pick him up on the issue, natch.

Talk about your confirmation bias!

No wonder he wants to "protect" their ABC. 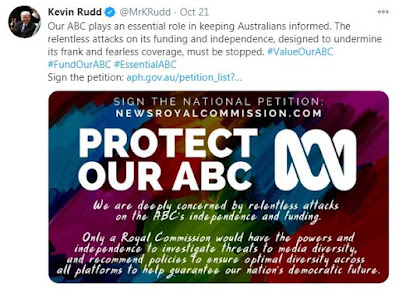 Looks like Kevin himself might just be the one holding the, er, racket here. He really needs to get his hand off it, I reckon.

Posted by MattHaydenAU at 1:01 PM