Melbourne is full of bad actors

There is absolutely no doubt that Daniel Andrews is waging a relentless psychological war on Victorians. Among other things he's paying top dollar for expert advice on how to manipulate public opinion.

The mainstream media should be holding him to account. But they're basically producing propaganda for him. It's deeply sinister.

He's clearly carrying out a plan that was given to him by his globalist masters. And he's got the majority of the population believing his brazen lies about wanting to keep them all safe.

It really is a kind of theatre of the absurd starring the crappiest actors imaginable. Yet the audience have been so relentlessly brainwashed they buy the whole evil shit-show.

Would be great for some kinda Aussie Trump equivalent to storm that particular stage and wake them all up! Sadly, that seems unlikely.

Or maybe a movie is a better analogy. 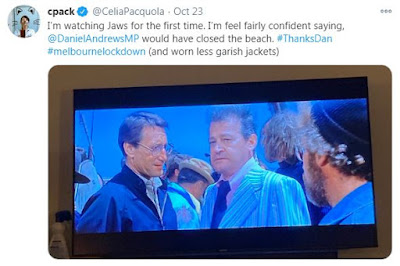 True dat ... Except there's no actual massive man-eating shark in this case. If anything, it's just a little blowfish that Dictator Dan and his mind control mavens have managed to get everyone packing their dacks about.

They'd have to rename the flick "Fish Lips" wouldn't they? Not nearly as terrifying as "Jaws"...

Though it is kinda scary in its own way because, like "trout pout", it brings to mind the lengths to which Hollywood stars will degrade themselves to maintain the levels of fame and adulation they're accustomed to.

And these slebs are definitely pawns in a sinister game. While many of them are talented, they are elevated mainly because of their willingness to "sell their souls" to the Hollywood puppet masters. Then they can be used to further the globalist elite's creepy agenda.

This method is in full swing in the US right now, with dopey movie stars like The Rock endorsing commie China's puppet Joe Biden.

And IMO something similar, albeit more nuanced, is is actually going on in Victoria right now.

Someone who's had some Tinsel Town success herself is Melbourne local Magda Szubanski. She made that excruciating ad for the Goblin of the South as I'm sure you recall. 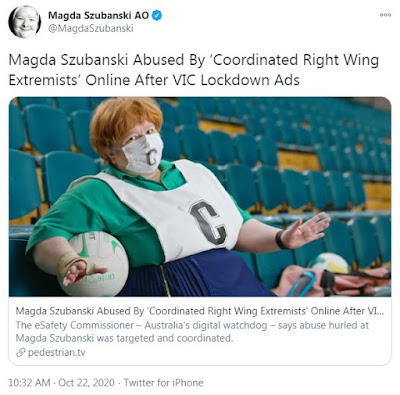 She got trolled massively for it, with lots of nasty comments about her weight among other things. Of course that kind of thing is completely unacceptable.

But this line that the abuse was "coordinated by right-wing extremists" is such bollocks. It's a conspiracy theory in itself, innit? Coordinated? By whom, exactly?

I notice that there's no actual evidence cited in the article she links to. It's just a bunch of grave sounding assertions about "volumetric attacks".

"Volumetric" is a real pseud's word, that one. It's like "stochastic".

If individuals are identified over this, which I highly doubt, I wouldn't be surprised if they are online agent provocateurs.

There have been plenty of these performing at Melbourne demos, after all. Ms Szubanski even features one of them, thereby furthering the whole sinister pysop (unknowingly, I suspect). 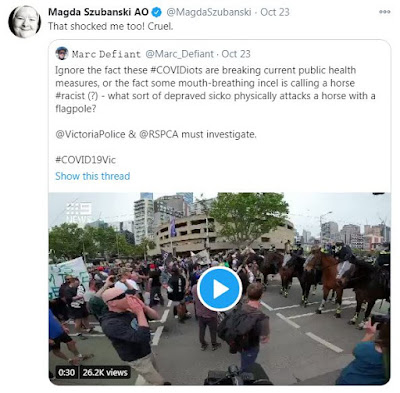 Really, there are so many crisis actors down in Melbourne, it's ridiculous. I would say that pretty much every viral video exposing the Victorian plods' brutality that ends up on the fake news MSM is staged to some degree. There are just sooo many of them!

The sinister globalists controlling Dictator Dan are clearly tryna make Victorians detest the local coppers. Then the loathsome liar will have an excuse to ditch these men and women in blue and install his special UN robocops.

Simultaneously the mainstream media are pushing this bogus line that right-wing terrorism is a thing, and a dinkum threat. 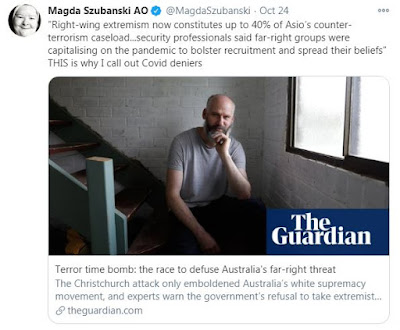 If a serious act of terrorism does occur down there, then King Victoria will have an even better excuse to crack down hard with his "peace keepers". Looks like this could well be preemptive programming.

Of course Sanjeev is talking about a metaphorical gun here. But I'm worried that a literal firearm (or other lethal weapon) may be used in some kind of false flag attack.
There's another kind of "bad actor" remember. And there are clearly heaps of them in that state too ...

Posted by MattHaydenAU at 2:27 PM