Dan Andrews and his spineless clown CHO Brett Sutton just get more and more repellent. Firstly they impose fascist restrictions on millions of people, thereby causing untold economic, social and psychological damage. Then they joke about it with each other, brazenly mocking those they are meant to be serving.

Even worse, many Victorians have been so brainwashed by the globalist forces behind these two evil creeps they actually applaud their sick jokes. But it's those people that these psychopaths have the most contempt for. They're just using them in the most callous way imaginable. 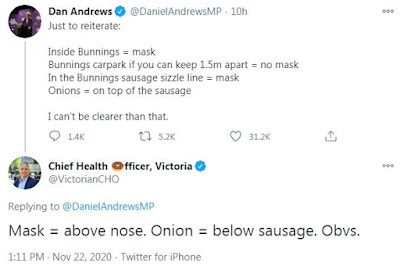 I find it intriguing that both of these arseholes are so confident about their positions. They seem to have absolutely no fear of being held to account for their actions.

IMO, this is due to the fact that there is a massive machine behind them. They are just playing roles assigned to them by the globalist elite.

And Dan seems to believe that he's got the next election in the bag. Has victory been promised to him because of his fine work in destroying Victoria to prepare for the NWO? Looks like it to me.

I suspect the same fraudulent tactics being uncovered now in relation to the USA election will be used to keep Dictator Dan in power. They may have even been what gave him victory last time.

Posted by MattHaydenAU at 1:21 PM